Help Me Remember The Name Of This Movie

As a kid I would turn on cable tv late at night and somehow manage to always catch the same weird movie. Bits and pieces of this film have been popping into my head lately, but not enough to identify what it was called. If I can't figure out what the heck this mystery movie was it's going to drive me insane. Maybe you can help?

In the beginning the words "American Ninja" showed up on the screen. I know what you're thinking, and no, that wasn't the name of the main actor or the director. The letters were huge. I'm guessing it was some sort of scene card (like "Bombay, 4PM Local Time" in a spy movie, or a movie about Bombay - I apologize for assuming that only spy movies would be set in Bombay) though I can't figure out its exact meaning in that context.

There was this one guy that kept dressing up like a ninja. I'm pretty sure he was the main character. He had a sword and toe sandals and everything, only he wasn't Japanese. The dude was caucasian, and he didn't have much of an accent. At one point someone asked him where he was from. Unfortunately his response was impossible to make out over the film's soundtrack, which suddenly started to blare the song "Born In The U.S.A." 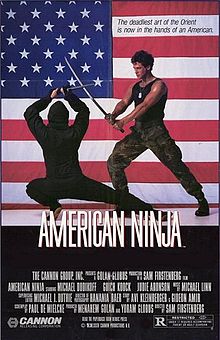 When the main character needed to get out of a tight spot, he didn't drop a smoke bomb. He dropped three of them. One was red, another white, and the last was blue. When the smoke cleared there was nothing left where the ninja once stood except an origami bald eagle.

There was a weird subplot involving a reporter who was trying to uncover evidence that the ninja did not have an American birth certificate. I don't remember all the details or even how this sequence of events ultimately panned out, but I do remember that the reporter was being pressured by a politician who was always smoking cigars and wearing shades. I think he might have been a bad guy.

At one point the bad guy attempted to flee, leaving his personal guards behind to slow down the main character. He jumped into a helicopter and took off. Thankfully, the helicopter maintained an altitude of 20 feet above the ground and seemed to travel no faster than 30 miles per hour. After the main character took out the bodyguards with his special move (the American Ninja Uppercut) he sprinted for his own vehicle, a monster truck with a wicked awesome American flag paintjob and custom plates that read "AMERICAN NINJA". The finale, where the monster truck crested a hill and smashed the helicopter as the bad guy screamed "Damn you, American Ninja!", was amazing.

At the end of the movie a newspaper spun into focus. Its headline read: "AMERICAN NINJA STOPS EVIL CEREMONY, SAVES THE WORLD FROM ANCIENT EVIL AND DESTROYS MEDALLION. THANK YOU AMERICAN NINJA!"

You know how the ending credits of a movie usually list everyone involved? There should be the names of actors and producers and all sorts of support staff. This movie's credits repeated that strange "American Ninja" phrase hundreds of times, if not more, for more than twenty minutes. Nothing else.

UPDATE 1 - Minutes after posting this article, I received scores of emails from our helpful readers. They unanimously agreed that the movie I'm thinking of is called American Ninja 3: Blood Hunt. They are all wrong and they are all very stupid.

UPDATE 2 - Minutes after the previous update to this article, another email came in. This one came from a, who informed me that the film is The Shining. I checked out a few clips, and can confirm that this is correct. Thanks again to our wonderful audience.