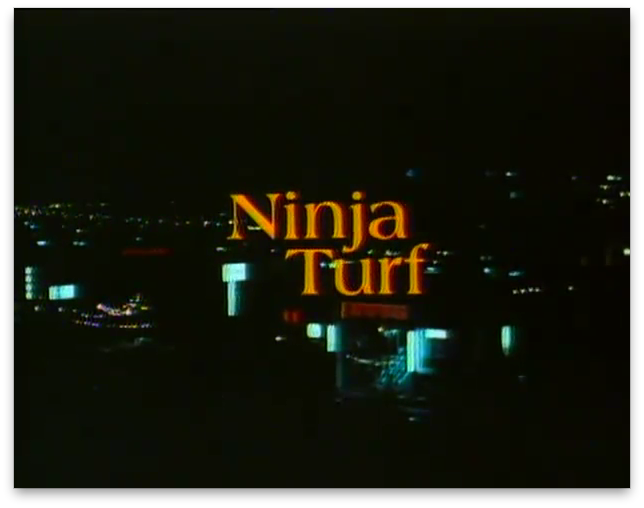 Overview: A bunch of guys run around in total darkness having ridiculous mustaches and fighting each other for mustache primacy. And invisible sacks of money, or something.

The Case For: You will be physically able to see so little of this movie that at times you can almost pretend you're not watching Ninja Turf. In other words, this might just be the best movie we've ever reviewed!

The Case Against: Even the people speaking English are so badly redubbed that every scene comes across like some twisted post-ironic meta-parody of itself. Also, the closest thing to a ninja in the entire movie is a samurai assassin who sucks at swordfighting.

AHA, HA HA HA - Welcome foolish reader! To your Doom! This lives Justice, and you will Being Failed! AHA HA, HA HAHA. Now is your defeating time, hope you gifts your Women and weaken child! Never mind this, for in truth it is you - are them! HAAAH HAH, HAH HAHAH.

[Establishing shot: midnight, inside of Carlsbad Caverns. Smash cut to Sea of Tranquility, The Moon, USA.]

"Not so quickly, Belly Shirt! Your condition will be coming to dead, at first, unlike to mine. HAHAH AHHAH. HUH? HAH! Never having been a fight so weaken, you see?"

[Deep inside of Fortress Evil, which looks suspiciously like a ransacked Quality Inn lobby, the Dread Lord Belly Shirt and his elite cadre of culturally diverse kung fu assassins are gathered for a top-secret summit to compare evil facial hair and leisure suits. Outside, a heroic Asian man nervously stands watch. Fade to black.]

...And thus ends our dramatic (and slightly abridged) reading of Ninja Turf. For the complete Ninja Turf experience, please hold your eyes shut for about five minutes and pretend you're eavesdropping on a roomful of ESL students doing improv comedy skits while slapping low-grade frozen steaks together, then go on with your day.

Now, some of you may still feel unsatisfied with our reconstruction, and a select few might be considering actually watching Ninja Turf, a potentially fatal mistake. Of course, the first problem you'll encounter with watching this movie is that you can't. One of Ninja Turf's many life lessons is that all Asians do look alike, and in fact so does everybody else, at least when they're filmed using a camera made out of a partially chewed-up oatmeal box. You can try to listen to the film instead, but then you have to contend with the incomprehensible dubbing, the highlight of which is a couple who, despite being at a brutal underground street fight, are dubbed by the whitest-sounding people in the known universe. They're whiter than David Sedaris swimming in a pool full of titanium dioxide. The few scenes we can make out only serve to reinforce our suspicions that the dialogue and fight choreography in this movie are 100% ad-libbed (and if not, they should have been):

The movie's main action (i.e. the visible parts) centers around Tony - whose major distinguishing character traits include "new guy," "Asian," and "named Tony," - and Young, or possibly Jung, the school's resident kung-fu master/psychoanalyst who welcomes Tony into town by signing the two of them up as freelance bouncers. As we all know, the best part about being a freelance movie bouncer (aside from getting to take your shirt off all the time for no reason) is all of the interesting people you get to meet and beat unconscious on the job. In Ninja Turf, the most interesting of these by far is the big hot sweaty man mess we've affectionately taken to calling Belly Shirt Guy.

Belly Shirt Guy is the rare kind of character who, in spite of actually appearing in less than 1% of the movie, is easily the most memorable one in it. If the makers of Mortal Kombat had included him as a fighter, it probably would've been the best (and last) videogame ever made. As you've probably already guessed, Belly Shirt Guy likes to walk around in a belly shirt - a belly shirt that simply reads "California." His other interests include: looking like a long-lost member of the Allman Brothers band who got thrown off the tour bus for his body odor; belly-bumping anyone who dares to stand in his way; and getting the crap beaten out of him by our heroes. We know that's a lot of information/character development to take in all at once, so we've taken the liberty of condensing the essence of his entire performance into this helpful five-second clip: