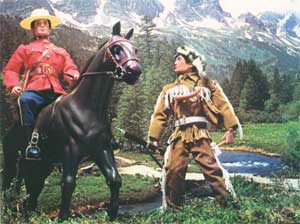 This pretty much sums up everything about Canada I didn't get to see.I recently had the pleasure of visiting a place called Vancouver, which is apparently located in Canada. I debated quite a bit over writing about my trip; more or less because the only thing people care less about than my vacation stories is Canada itself. Besides, everybody has already made fun of our maple clad neighbor more than enough. Although justified, I'm not eager to jump on the bandwagon, especially when the bandwagon is being pulled by dead horses that have been beaten to such extremes that the only way to beat them further is through the aid of special molecular beating equipment developed by scientists. With better judgment and common sense dangling a serrated knife at my conscience's throat I would be a fool to write about my trip! So without further ado, I am now pleased to write about my trip to the land so far north of the Mexican border that it's actually above the US border. Rather than bore you with the details about my own personal adventures, I will instead fill you in on what I learned from my odyssey. Now keep in mind I haven't explored Canada in full Technicolor glory. I've pretty much just been to one rainy corner of it, so I have no right to judge the entire country in the way I'm about to. Frankly, I just don't care. It's not like anybody can do anything about it. Send your Mounties and I'll dispel them as easily as I dispel the damsels I kidnap and tie to train tracks for jollies! You don't scare me.

Canadian Culture
I remember Lowtax mentioning that Vancouver was full of Asians, but I just assumed it was his usual racist insights and conspiracy potpourri. The truth is that Vancouver really is full of Asians. I guess if you already live there the truth isn't all that shocking, but then again, maybe the part of your immune system that handles the shock of learning the obvious isn't operating at peak efficiency. If the rest of the country is anything like this one area, and I can only assume it is, then holy crap, that's a lot of Asian people! I don't know how many Asian teens in oversized hip hop clothes I saw, but probably more than any man should ever have to see. There are more Asians in baggy clothes in Canada than in a samurai liposuction clinic. I have long argued and petitioned for the governments of the world to provide all Asian people with a free T-shirt that has "Asian" written on it, mostly because I think it would make things easier for everyone. After visiting Vancouver, I think it would be more practical and economical for the Canadian government to issue everyone who isn't Asian a T-shirt that proclaims "Not Asian!" No, I'm not trying to single Asians out, but if you're going to inexplicably force everyone to wear a shirt with their race printed on it, you have to start somewhere.

The rest of the population seems to be a hodgepodge of rapscallions who all speak different languages. In fact Canada doesn't seem to have any language standards, probably because Yahweh or another rapping genie twisted their tongues so they cannot understand each other.

Canadian Hobos
My encounters with the homeless populations were very limited, but they reinforced what I already knew: my pocket change isn't going to eliminate poverty, especially not when I spend it on junk food for myself. Still, I have to give the Canadian bums some credit. They took no for an answer, and that's more than can be said for many of the homeless denizens of Chicago or some of the major cities of the United States. At least in Canada I never had to endure a homeless man hounding me for four blocks desperately trying to get me to wager the price of a hot dog that he can guess how many siblings I have.

Canadian Food
I'm convinced Canadians live off of raw squid and anything they can dredge up from the sea and pour gravy and/or vinegar on. That and all the same stuff we eat in America, albeit with goofy mispronounced product names to give the false allure of suave European sophistication. Elegant accent marks can make any typical product name sound like a shimmering diamond mined from the fertile bowls of the finest dragon filled cave. 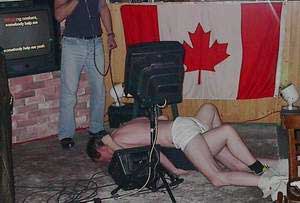 Here we see a typical meeting of Canadian Parliament.

Canadian Comedy
I guess growing up on the Kids in the Hall left me with the false impression that Canada was some kind of primordial spawning ground for good comedy. After ten minutes of the Sean Cullen's Show I wanted to drill holes in my skull and then fill them full of firecrackers. Why? Well, I've always kind of wanted to look like that one moon-headed McDonald's mascot guy. Adding artificial firecracker craters to my head would just be my way of expressing who I am on the inside, and you can't take that away from me you fascist bastard!

Canadian Politics
After taking in a considerable amount of Canadian TV I think I can safely say that nobody has any idea what the hell is going on with Canadian politics. There are a whole bunch of these one guys who I guess kind of do stuff on occasion, then there is this one guy who just kind of emits semi-intelligible noises that may or may not be a rudimentary form of oral communication. I'm pretty sure that guy is running Canada. In spite of a total lack of real government Canada does pretty well for itself. I suspect this is purely because every Canadian citizen lives under a blanket of fear knowing that if they give up the ruse the whole circus will collapse and they'll have to go back to America where things run like a finely tuned broken clockwork. After looking at the pictures on Canadian money, I'm convinced they also elected several ducks and hockey players into positions of political power. After all, only political leaders and historical landmarks get put on money.

Ultimately I did enjoy Vancouver. It's like living in a crappy city, but with the added benefit of scenery. I may even return to Canada, but probably only to stage a coup d'etat and overthrow Prime Minister Duck's oppressive quack regime. 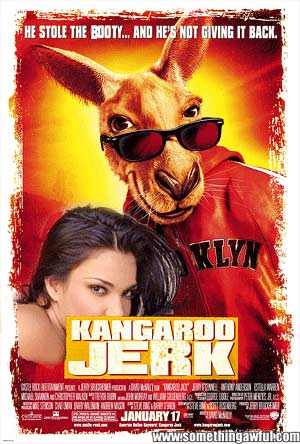 OH MY GOODNESS IS THIS THE LINK YOU'RE LOOKING FOR? WHY YES IT IS!