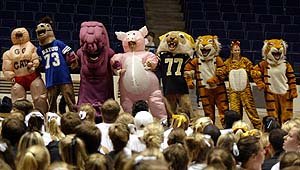 With college football season in full swing, and the bird flu mutating into a super virus that will cover the planet in a shroud of inescapable death, we are reminded of the unsung heroes of college sports: the mascots.

These loveable miscreants are invaluable to our regional college teams. They provide laughter, merriment, and most of all, team spirit. Many take the role of a mascot lightly, thinking their station in life is on par with filthy clowns and mime performers. This is simply not true. Mascots are some of the most noble, dedicated, and stout-hearted performers. They know no fear in the face of opposition. They have such innate senses of honor that they would gladly perform ritual seppuku for a crowd, driving razor-sharp blades into their suits and spilling steaming entrails into the front row.

They take their craft very seriously, and are prone to take grave offense if one discounts their work as mere tomfoolery. That is why we salute them this day, and induct some of the top mascots from across the country into the College Mascot Hall of Fame. 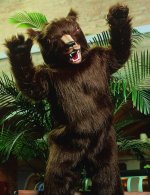 Buddy has been a figurehead of the Twin Pines stadium at NEU since 1964. At first, Buddy was not well received. This was a closeknit community which distrusted outsiders, especially bears with fetal alcohol syndrome. He endured many harsh tauntings and thrown pop cans during his early career, but soon won the hearts and minds if the fans with his crazy antics and awe inspiring team spirit. Soon he was a beloved mascot known in every college around the country, becoming a top tier mascot all-star.

But it wasn't all cheers and laughs for Buddy. He had his share of mishaps over the years, like when he ran into the stands and bit into a baby's head like a ripe apple. In Buddy’s defense, the baby had mustard all over it because of a careless hot dog vendor. There was also the time he mauled the kicker on the sidelines because he had some Bit-O-Honey in his pocket.

Despite these setbacks, Buddy more than made up for it with his mascot skills, and by kicking the winning field goal in the OSU game when he subbed in for the dismembered kicker. Buddy was named the team MVP before he was shot by the local park rangers for knocking over trash cans.

The south is full of tradition: biscuit gravy, slavery, incest, and, of course, Confederate pride. They are damn proud of getting 2nd place in the famous Civil War that tore this country apart in the 19th century. This pride shows when General Score-a-Lot is on the field, distracting the visiting Yankee team with his bold style of mascottery.

General Score-a-Lot is most famous for a legendary game against NYU -- a team favored to beat the Tennessee Rebels by a 40 point spread. During the opening coin toss, the General shot the coin in midair with his trusty sidearm, causing it to flip in favor of the Rebels receiving the kickoff.

He then pretended to be a Jewish banker from New York, and rode a large hog around the perimeter of the football field. The hog went mad from the noise and confusion, made a beeline for the exit, and ended up bowling over the NYU offensive coordinator. The collision put the coordinator in a coma, leaving the Yankee team without a clear offensive strategy.

It was very close, but despite all of General Score-a-Lot's efforts, the Rebels failed to win the battle. Just like the ill-fated Confederate charge at the battle of Gettysburg, the Rebels were crushed on their last drive to win the game. Regardless, it is known at ETU as one of the most exciting games in college football history.

Some didn't take the loss so well. In defeat and shame, the General hung himself from the goalpost after the game. He was a mascot all-star who taught us all about the meaning of friendship and love. We will remember him always, in our thoughts and feverish nightmares. 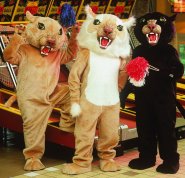 Some call them the "Three Stooges" of the mascot world, and after watching a SCU home game you can certainly see why. They get very worked up when trying to get the crowd into the game. Sometimes this causes friction between the trio, especially if they accidently step on each other's tails, but the fans are always delighted when the infighting escalates into full scale brawls. Some people attend Krazy Kat games not to see football, but in hope of see a mascot battle, like an outsider attending a NASCAR event just for the crashes. Most of the time, they are rewarded with delightful cat on cat violence.

For their unique brand of entertainment, the Pussy Gang have been named all-stars in the mascot hall of fame. We all hope that they will recover from that drunk driving accident and return to the stadium very soon. In the meantime, the sideline entertainment will be provided by Chuckles the Hairless Clown.

The Negro Spartan has a special place in our hearts. He was created in 1924, and has been one of the most recognizable mascots of this century. In many games, he was known to have mock battles with his trusty sword and threaten the opposing team's mascots. Sometimes he pretended to run them through, much to the delight of the children in the audience.

The only time he really slew another mascot was in 1959, when somebody pulled a college prank and switched his fake sword with a real one. The other mascot was Ricky the Rabbit, and was dancing in circles around the Negro Spartan in an attempt to throw him off his game. With one swing of the sword, Ricky's head was sheared clean off leaving rockets of gore to spurt from the hewn neck. The Spartan was later absolved of all charges because he was ignorant of the prank, and the legend is still told in the halls of ZSU to this day.

But not all is well in the land of mascots. There has been a lot of controversy in the last ten years about acceptable college iconography. With the rise of political correctness and liberal hippies gaining positions of judicial power, we have seen many of our beloved Native American mascots taken away from us -- like the Oklahoma Scalper and the SJU White Baby Eater. This disturbing trend is now targeting some of our oldest mascots, such as the ZSU Negro Spartan.

Groups like the NAACP and Greek Historical Society are protesting the image of the Negro Spartan, calling it racist and historically inaccurate. This also caused a feud between the NAACP and the Greek Historical Society, the former calling the latter racist for saying that there were no black Spartans. The GHS fired back, saying that there were some black people in ancient Greece, but these were mostly slaves from North Africa. This of course made the situation even worse, so the Negro Spartan called a press conference and announced his retirement to end the bickering. For this brave sacrifice, and for his years of service, he has been inducted into the mascot hall of fame to be remember forever. 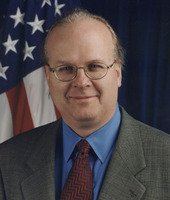 Karl has been around Washington for years, but many people don't know him. He is the sort of mascot that stays in the background, supporting from a distance with a cherubic smile and charming grey eyes. While lurking in the shadows, he has helped his team with his unorthodox methods and "thinking outside the box". He is bold in his maneuvers. So bold, in fact, that nobody who hears of his moves can believe it and dismiss the reports as old wives tales and whiny liberal talk radio. This is how he maintains his position as one of the top mascots in the country.

Since Karl isn't currently playing for a college, it goes against the hall of fame rules to induct him into the ranks. Let's just say he has friends in high places who made some phone calls, and the endorsement is getting pushed through. We are not happy about this decision, but we have no choice but to abide by it, at least for a few years.

Harvey is sweetly retarded. He thinks he is a basketball mascot, so he wears his jersey and brings a basketball to every game. Nobody has the heart to tell him that they are playing football, and that when he drinks all the Gatorade on the sidelines the players tend to get thirsty and dehydrated. Harvey was actually fired from his position five years ago, but didn't understand what was happening and therefore keeps coming back to the games to mascot. The people of the Canadian Navy College are much too kind to have him thrown out of the game, so they just let him sing his New Kids on the Block songs and throw the basketball onto the field during play.

Harvey really isn't a great mascot and shouldn't be included in the hall of fame, but his mother gave us a call and we decided to make an exception in his case. His heart is in the right place, and that is the most important thing when it come to team spirit.

Those are the college hall of fame mascots for 2005! Now if you excuse me, I'm late for the Lions game. I've been drinking steadily all day, so I can cope with the fact that Detroit is a horrible team despite all of their young talent. Happy Thanksgiving!

'Rus! Russ!...Everything within you is open, desolate, and flat; your squat towns barely protrude above the level of your wide plains, marking them like little dots, like specks; here is nothing to entice and fascinate the onlooker's gaze. Yet whence this unfathomable, uncanny force that draws me to you?