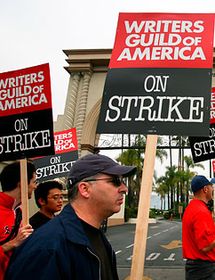 America is a wasteland as Fat Cat Hollywood writers refuse to write for the eleventh consecutive week. Taxpaying citizens watched in horror as the TV airwaves slowly dried up and then were replaced by a dead monotonous static, echoing the shocked silence inside our souls.

The population grew desperate and then violent. Major cities were razed. Other cities were raised and then dropped, breaking them. A tumbleweed blew across the street. An old man rode by in an engineless Toyota Corolla pulled by a mule. "These are bad times," he said.

What will happen to us if the writers continue to not write? Only god knows. There is no god. No one knows.

This is a cold and dangerous world without WGA members doing their writing duty. Tell my wife I love her if I don't make it home. I don't love her, but tell her I do.

"Negotiations are progressing and we are zeroing in on the points of contention," said WGA president.

Terry Marshall wants what every American wants for his family: safety, prosperity, and a secure future. Unfortunately, the refusal of television writers to continue their work has placed all that in jeopardy.

"Oh gosh," said Terry, who has moved his family to a make-shift shelter in the basement for the duration of the strike, "I'm just not sure how much longer we can go on like this."

Despite stocking up on food and water when warnings of a strike first emerged, the Marshalls soon found themselves dangerously low on supplies.

"It was terrible," said Laura Marshall through a small slot in the fortified basement door. "I'm amazed we made it past the first week. I remember Terry joking that we might have to eat the 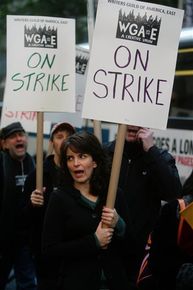 children. He always used to make that same joke whenever we needed to go grocery shopping before...well before all this started. It's been terrible."

The Marshalls are just one of thousands of families in America struggling to make it through the crisis. Their next-door neighbors are assumed to have succumbed nearly a month ago, based on the pungent smell now wafting out of every open window.

"If this goes on much longer," said Terry as he escorted me out through the front lawn minefield, "we'll probably have to eat the children."

He flashed me an optimistic smile and leaned proudly against the floodlights.

"But gee, I hope it doesn't come to that." The American spirit shines on in the darkest hour of our history.

"It might though," he added. "It might come to that." He continued to lean against the floodlights, his face frozen into its wide smile.

Five Things We CAN'T Tell You About The WRIT'ERS STRIKE!