This week, The Wolfman does its best to ingratiate itself with Ian "ProfessorClumsy" Maddison, and mostly succeeds. Robert "Macrame_God" Seeders survives Percy Jackson and the Olympians: The Lightning Thief. Finally, Joseph "Jay Dub" Wade braves Valentine's Day alone -- and even reviews the bad film of the same name.

EXPECTATIONS: Trailers for The Wolfman have me salivating for what looks to be an intelligent, atmospheric horror film that recaptures the feel of the Universal horror classic upon which it is based. That said, critics have been declaring it a major disappointment. But maybe there's enough of the old-fashioned charm in there to make it work.

REALITY: Looks like I was right, for the most part. The Wolfman is a gloriously Gothic retelling of the old classic. If you enjoyed Kenneth Branagh's campy and creepy take on Mary Shelley's Frankenstein, then you'll find a lot to like here. 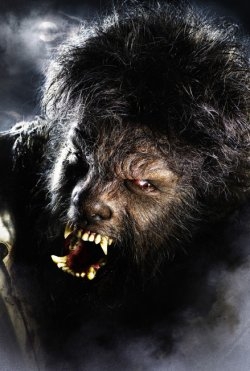 Rawr! I'm a wolf :3Laurence Talbot (Benicio del Toro) returns to England from America after the mysterious death of his brother, only to find that there's trouble on the moors in the form of a big hairy thing that rips people's arms off. The locals blame a troupe of gypsies who recently came to the area with a mangy dancing bear. Mangy dancing bears rip people's arms off all the time, right? So do Wookies, if you don't let them win. Turns out it's actually a werewolf, which explains the title.

During his investigation, Talbot is bitten by the beast, contracting the werewolf curse and probably tetanus as well. In one month, when the moon is full again, he will transform into the Wolfman to prowl the moors -- and rip people's arms off. He is hunted by Inspector Francis Abberline (Hugo Weaving), who famously failed to catch Jack the Ripper. Things get increasingly silly and gory until we learn the true secret of Talbot's lineage and the past of his father Sir John Talbot (Sir Anthony Hopkins).

Directed by Joe Johnston (Jumanji, Jurassic Park III), the film has a brilliant visual style, with almost every scene lit in some way by the pale light of the omnipresent moon. The cycles of the moon are also used to show the passage of time, which I found to be a very clever and eloquent tool. There's never a visible sun; daylight scenes are haunted by perpetual fog, and the moon itself rises and sets in a bizarre way. 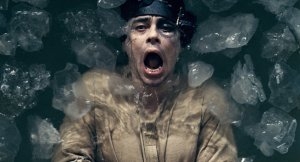 Nothing like a cold bath to start the day right.There's more to this film than just moonlight, though; the real star of the show is Rick Baker's superb old-school make-up. Watching hairy-faced del Toro tear the guts out of innocent people is wonderfully entertaining. Talbot is a perfect blend of wolf and human, which leads to a lot of surprising physical attributes, such as the way he mixes it up between running on all fours and using his arms to throw people out of windows. The sheer artistry on display made me wish that more screen time had been given to the crazy wolf rampages, even though they got a little too silly for their own good.

Yes, this leads me to the negative element of the review. To start with, the tone is a little confused. The Wolfman takes itself seriously at times, and then launches into camp silliness, only to settle back into straight-faced bleakness. Add to this a romance between Talbot and his dead brother's fiance Gwen Conliffe (Emily Blunt) that doesn't really seem to go anywhere, but supposedly ends with undying love. A lot of scenes end rather abruptly, be they conversations or horror sequences. Sometimes it feels like something interesting is about to happen, but then nothing does. All of this makes me think there's a lot missing, and that the film was drastically reduced during the edit. Now, I often deride films for being too long, but I'd love to see a director's cut of The Wolfman on DVD. For now, we see the ingredients for what could have been a great film, if it were given time to bring them together succinctly. 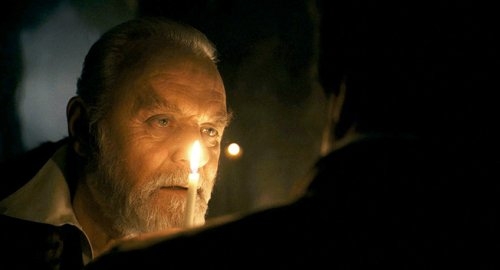 "My nose is burning and I'm not sure why."

Things get even patchier towards the end, with Sir John's manservant Singh (Art Malik; it's nice to see him back in cinemas) written out off-screen and another character who appears and disappears just as quickly, leaving the audience to wonder just who the hell he was. 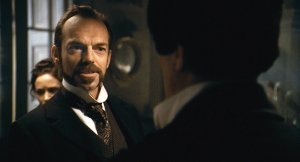 I'm sure you'll agree that this man's presence is enough to justify the ticket price, especially sporting that fine mustache.I also have a slight issue with the accents. Many of the smaller parts seem to have been cast from around Britain and they're all doing their generic English countryside voices, apparently with nobody around to tell them they're doing it wrong. Hopkins is the worst culprit; really, his performance on the whole is just bizarre. Jumping from massive amounts of ham to understated naturalism at the drop of a hat is one thing, and this actually seems to match the changing tones of the film itself, but his accent is a total mess. Sometimes he sounds Irish, sometimes he sounds Welsh and very occasionally he manages to sound English. It's like he's spent so long in America that he's forgotten that people in different parts of Britain speak differently. It's distracting and confusing, and it makes me wonder if nobody on set had the balls to mention it to him.

Although The Wolfman is somewhat of a mixed bag, I will go so far as to recommend it, largely because of the beautifully designed creatures, the gorgeous lighting and the scene-stealing brilliance of Hugo Weaving as Inspector Abberline, who at one point gives a clever, impassioned and hilarious speech about why he'd rather spend his evening at the pub than scouring the moors for monsters. It's definitely a step up from most modern horror tripe, and it smuggles in enough originality to make you forget that it's just another Hollywood remake.

MINORITY REPORT: Anthony Hopkins has some wicked-awesome eyebrows! That's about all I remember from this movie. -David "Data Core Devil" del Vacote III