Looper; Won't Back Down; Hotel Transylvania; Killing Them Softly

EXPECTATIONS: As a fan of Brick and the two episodes of Breaking Bad directed by Rian Johnson, I've been excited for Looper for a while now, but not without reservations. For instance, I'm somewhat perturbed by the trailer, which features Joseph Gordon-Levitt doing his best to look like Bruce Willis. It's distractingly effective - I spent most of the trailer wondering how Gordon-Levitt is twisting his lips into a Willis-like shape. I hope I can vault this uncanny valley to enjoy the movie proper.

REALITY: If more movies were as good as Looper, Looper wouldn't seem so great. I know that's a bit of an obvious statement, but what I mean is this: Looper is not a great movie, but if you set aside one tremendous flaw, it's a consistently good one. Unfortunately for other films, this serves as a reminder that if most Hollywood writers and directors put forth just a little more effort, they too could produce a sci-fi action-thriller as good as Looper, which sets a standard that isn't beyond reach. 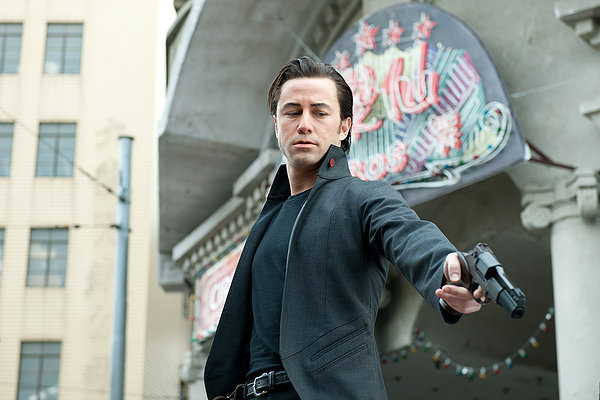 I don't know what it is, the eyes, the nose, the forehead... it really is more jarring than it is convincing.

In most time-travel movies, the protagonist generally adheres to one essential rule: He must not interact with his younger self lest he create a paradox that causes both of their heads to explode into confetti or something. Looper brazenly breaks this rule in the very premise, which has Joe (Gordon-Levitt) hunting an older version of himself (Willis) in the present. Paradox? What paradox? See, Joe is a "looper," a hitman who takes advantage of time travel to eliminate the mob's enemies in a way that leaves no bodies to be discovered or forensic evidence in the future. Someone pisses off the mob in 2074, the mob sends that person back to 2044 with his hands bound and his head sacked, and Joe kills him and incinerates the body. Why the mob can't incinerate bodies in 2074 is never fully explained, but if I'm required to suspend my disbelief to swallow the premise, I will.

Anyway, the standard looper contract requires the looper to eventually kill his future self. Once a looper does this, he's released from his duties for the following 30 years, with a fat paycheck as a parting gift. This, as Joe notes in his overly expository monologue, is a process called "closing the loop," and he looks forward to it. Sounds like a shitty retirement plan to me, but considering the threats to Social Security circa 2012, this might be an improvement. Come to think of it, Looper's dystopia might be the result of Mitt Romney winning the presidency, with an economy that's topped by 1-percenter hitmen and bottom-heavy with the homeless, who wander down the city streets in throngs. 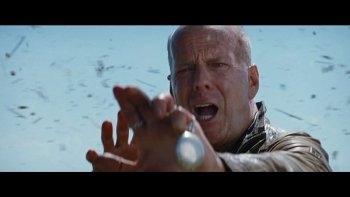 Don't shoot me, I'm integral to the plot!As an increasing number of loopers begin to celebrate their retirements, Young Joe has his suspicions, which are confirmed when he's tasked with killing Old Joe, who escapes the hit and gives Young Joe vague prophecies about the future, in which a mysterious figure known as The Rainmaker is closing the loops en masse after taking over the mob. Old Joe, carrying a scrap of paper bearing a number, suspects The Rainmaker is but a child in 2044 and sets about killing him as Looper addresses the age-old philosophical question: "If you could travel back in time and kill Hitler as a child, would you?"

Now that's a lot of plot, and most of it happens in the first 30 minutes. I suspect the plot, which is packed to the gills with contrivances, serves only to justify what follows: a tangle of virtuoso chases between a) Young Joe and Old Joe; b) the mob and Young Joe; c) the mob and Old Joe; and d) Old Joe and three children, one of whom might grow up to be The Rainmaker. Sometimes, these conflicts blur and the henchmen are chasing Young Joe while he chases Old Joe while he chases one of the children -- you get the idea. Also, looper's guns, "blunderbusses," have a 15-yard range. Don't you think that this detail, repeated a couple of times early in Looper, might factor into the ending?


Looper's most frustrating fault is that it lacks Brick's finesse when presenting a complex plot. While Brick barreled forward, barely allowing the audience to catch up, Looper progresses in fits, giving the audience more than enough time to catch up -- enough time, in fact, that most will probably predict the big twist based on the overabundance of exposition in Joe's voiceover and the trailer, which reveals more than you'd guess. 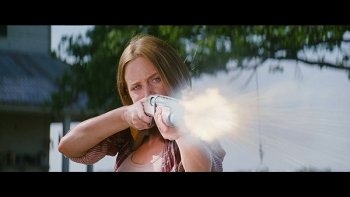 POW! ... guns.The other big fault, and your mileage may vary, is Looper's disingenous conclusion, which plays out like the producers realized they were out of money and needed to end Looper quickly. Now, I'm all for abrupt endings -- hell, I prefer abrupt endings when that jarring finality suits the material (see: No Country for Old Men, Enter the Void and The Grey) -- but Looper feels like it's building toward an all-out spectacle at which we never arrive, and the ending defies quite a few theoretical notions of time travel. This isn't a playful subversion of the genre so much as evidence that Rian Johnson is better at first and second acts than conclusions. But, what wonderful first and second acts Johnson provides!

Heavy-handed exposition aside, the first 90 minutes of Looper are fantastically entertaining and a terrific showcase for Johnson's strengths: energetic camerawork, dialogue peppered with off-kilter turns of phrase and clever plot machinations that allow him to reinvent cliches. Oh, yeah, and realistic blood. More and more, filmmakers are using Adobe After Effects to create crappy-looking blood splatters. By contrast, the gunshots in Looper are downright satisfying, with sprays and chunks. That may sound spergy and creepy in equal measures, but realistic gore is essential to convincing and exciting gunplay. Johnson doesn't overdo it -- he rarely shows such violence in slo-mo or close-ups -- but losing a gunfight in Looper has brutal consequences, which raises the stakes for the characters.

Compare Looper to recent sci-fi action duds like Total Recall, Resident Evil: Retribution and Chronicle, and it's easy to see how we've confused solidity with greatness. Looper is a good time at the movies; it's also a step backward for the director of Brick. Still, there's reason enough to believe - to hope - Johnson will knock the next one out of the park.

MINORITY REPORT: I don't know who these guys are or how they got a hold of my time-o-gram machine, but they'd best give it back before myferretlawyer files a future suit. - Donovan Laird, Future Critic