When Blizzard unveiled Diablo III earlier this week, it didn't come as much of a surprise to anyone. Well, there was one guy who thought Starcraft 3 was being developed alongside Starcraft 2 with a projected release date of one week prior to the release of the game it was following, but no one has taken Cliffy B. seriously since he predicted that Mario would never appear in another video game after Super Mario Sunshine.

Sure, it didn't blow any minds, but the announcement came as welcome news. Diablo II is still the first thing I install on my computer after a trojan-laden lolita incest hentai comic forces me to reformat. It's hard to believe that in the last eight years no one has been able to step in and create a better action-rpg. It's even harder to believe that a ten year old girl can lubricate her entire body with egg yolks then squirm into the urethra of her mother's penis and follow it until she returns to the womb, but I saw the drawings. It can happen, people.

After watching the Diablo III gameplay footage, I was really excited. The visuals were fantastic, a lot of small improvements had been added without seeming to get in the way of what makes the series great, and by the end of the video I found myself moving my mouse around the screen as if I was playing. That's sad, but what's even sadder is that I'm not a big-time game journalist so I can't come up with a term like "gamesturbation" to describe the lonely and desparate act while making myself cool and quotable.

Imagine my surprise when I discovered that my positive impressions were irrational and baseless, while most of the internet saw the game for what it truly was: A personal insult to them and a serious threat to all they hold dear. If you find that you've mistakenly become mildly optimistic about the game, read on to find out where I went wrong so you can adjust accordingly. 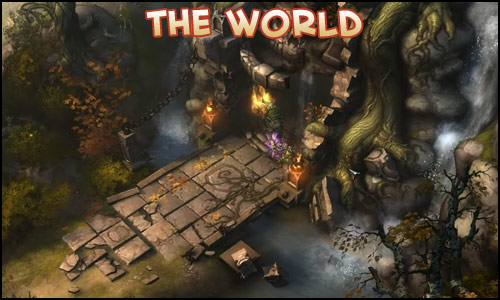 My Initial (Wrong) Opinion: Wow, it's the world from Diablo in 3D, rendered like a painting to retain the 2D flavor of the previous games. The dark and ominous themes are still there, only now we don't have to use our imaginations to fill in the details suggested by blocky sprites.

The Internet's (Correct) Opinion: Wow, it's a shitty cartoon! This is NOT the same world that Diablo I and II took place in. No way.

Do I see a rainbow? I'm sorry, but rainbows don't exist in the Diablo universe. I have read all the lore, and there is not a single mention of rainbows in there. Big surprise that Blizzard retconned rainbows into Diablo. Vapid morons. Who do they think they are? I've been playing this series they created for years, and they fuck everything up like they own it.

Here's the dark and gritty Diablo II, which Diablo III should look like: 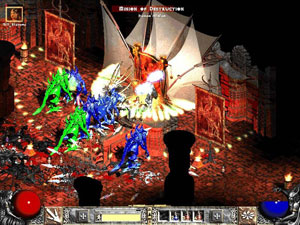 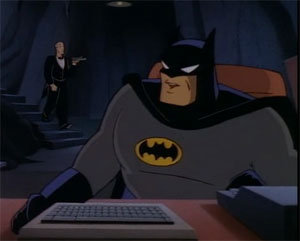 Or is that Diablo III? I honestly can't tell.

Blizzard should give the game a dark atmosphere by literally making the game too dark to see anything and then maybe add some film grain on top of everything. If the technology is available, the black silhouette of a thumb could get in the way of the player's view to obscure the game from time to time and add to the game's overall darkness.