Blue Stripe - The Life and Times of a Weyland-Yutani Cryotech 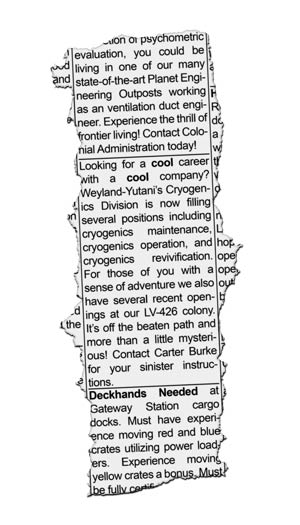 Gotta love the Company. No, you have to love it. It's right there in the employee manual."Building Better Worlds." That's what it says in the ads, right? Mighty big of them, but maybe good old Weyland-Yutani should figure out how to build a better chow hall first.

The food here on Gateway is the worst I've pounded down since I bought that crate of Z-rations off a trader. Damned things turned out to be salvaged from a waste disposal derelict in the Outer Veil. They were deep-vac burned to mush and the writing was all in Korean or something, so for all I know I was eating dog biscuits. At least on Gateway we get watery brown gravy on top of our dog biscuits, but the Company has a long way to go to impress me.

Oh, yeah, sorry, the name is Washington, Roger Washington. Hope the cigar smoke doesn't bother you. I rarely light one up. Usually just suck on the things, cost of 'em being what it is and all. Oral fixation, I think they call it. I'm sure some headshrinker in Psych would say it means I want to screw my mother, God rest her soul.

Been with the Company going on, shit, almost 20 years now. Started out a ship hand running the old ICC trade routes around the Core Systems. Bulk shipping, a little contraband on the side. I spent three years aboard Costaguana, got promoted from a cargo hand running the powerloader all the way up to chief engineer. Then our ship got run down by some Commies not too far out from a supply drop at Tamburro Station.

Captain Mitchell didn't know it, but the Commies just wanted to ransom the Company for the ship. It was their way of raising money for their own colonial ventures. Mitchell, he goes all John Wayne, has us take to the life boats and self destructs Costaguana.

He went down with his big ugly barge of a ship and the Commies nearly killed us, but instead they let us go at Tamburro. The Company was pissed about the ship and with Mitchell gone they only had us to blame. A couple guys got nailed with dereliction of duty charges. Me? I got kicked down to where I am to this day.

I'm an ice cream man. That means I'm in cryogenics. I'm a second-grade cryogenics technician, to be exact. One step up from the low man on the totem pole, I install and maintain the deep freezers and make sure they're not going to leave anyone with crystals in their brain. 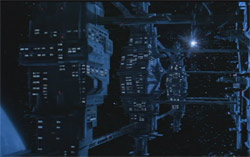 Gateway is a lot like earth, only take everything that's good about earth and replace it with the smell of recycled air and probably recycled food.No salvages, no bounties, no double time bonuses. I'm a slave to the wage, my man. I've been at it for 15 plus years and at this rate it'll be another 30 before I can retire.

So, the food sucks, the work is hard, and the pay is meager, but I haven't even told you the strangest part of all: I love my job. I love it. I love the smell of a liquid helium leak. That sharp taste you get in the back of your throat as it vaporizes off the floor. It makes me happy to come in and see all of the freezers waiting for repairs or upgrades or roll-outs or whatever.

I don't even mind scraping the occasional unlucky frost ball out of the inside. Just climb in there with a chisel and some heavy duty spatulas and pry them out in pieces.

That only happens to people using freezers prepped somewhere else. Those shake and bake colonies in the Loop or some podunk station in the Outer Systems, they just don't got the quality cryotechs like me. No attention to detail. My freezers have a zero failure rate, because, motherfucker, I care. I don't want some old suit melting in the middle of transit to Micor. It reflects poorly on me and on the Company.

I work with some loose bolts, but I love 'em. Buddy and Castle are a couple former prisoners, they were just kids when they got thrown in one of the Company's penal colonies. They're out on good behavior and working off debt they owe the Company for setting fire to a truck or something. Despite their situation, those two are funny as hell.

Then there's Ramón. He is probably the most normal of 'em all, and he's always seeing the Virgin Mary everywhere, in sandwiches and grease stains and what have you. Ramón is new here from the Company's Horizons Beyond blue collar program. From what he says it sounds like they shanghai a bunch of teenagers into joining up to get out of poverty, then ship them off to work hellworlds in the Outer Veil. Ramón was lucky enough to test into cryogenics somehow and end up on Gateway in earth orbit.

Ramón is probably my best friend, but he can have a temper if Buddy or Castle fuck with him. They glued all his freezers shut one day and when he figured out what was going on he pulled out this wild butterfly knife and started doing all these flipping things with his hands. Said he'd open Buddy and Castle up like purses and take out their hearts. I calmed him down, but I can tell one day someone is gonna say the wrong thing to the kid and he'll be on his way to Fury 161.

Women? Sure, I'd love to start a family and settle down, but the ratio even on a station like Gateway is like 2:1. Broads don't tend to shack up with a second-grade cryotech. They're looking for a popped collar and the smell of aftershave, not a popped field dampener and the smell of Freon. Don't get me wrong, I get my share of stink on my dipstick, but a cryotech brother has got to pay for it.

The fungirls look alright. Mostly Asian or Eastern European. I gave up trying to figure out if the girls I was with were original parts or aftermarket. I guess it don't matter as long as you aren't trying to have a kid.