Tuesday, Oct 05, 2004 by Rich "Lowtax" Kyanka (@TwitterHasBannedAllMyAccountsEver)
Know of an awful site? Send it to us and become a hero!

The Matthew Books, submitted by Rabbi Satan. The story of the Matthew Books website is as old as time itself. 17-year old kid gets creamed in a car accident. Heartbroken mother visits a psychic who informs her that the dead son really wants to speak with her, despite the fact that he's very dead. Mother begins to have dreams about the son, which she astutely realizes as telepathic communication from the dead. Mother begins quizzing dead son about his piano lessons and the agenda of aliens visiting the Earth so she can write a series of books with titles such as "Revelations for a New Era" and "Illuminations for a New Era." You know, because dead 17-year old piano players obviously have a tremendous amount of telepathic insight and specialize in predicting the future of the Earth. 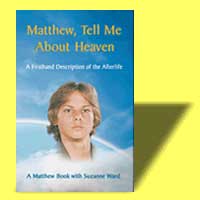 THE SIGN CAME ALMOST NINE MONTHS LATER in her first dream about Matthew since his death, and in the months that followed, she learned first of a medium in Virginia, then one in Maryland, and later another, in Delaware. None of them knew each other and none asked Suzy anything except her son's name. Yet all accurately described Matthew's physical appearance and personality; they told her the cause of his death and the ease of his transition. They talked about his new interests and activities, sometimes with a progress report on educational pursuits or piano lessons. And they gave her explicit information about her own life, even details that she alone knew. They could tell her all of these things because they were merely passing on to her what Matthew was telling them -- the love between him and his mother was the inseparable bond that enabled him to be aware of her comings and goings.

If you don't believe that these particular telepathic dead son books aren't the absolute best books about telepathic dead sons on the market, be sure to check out the review section, which includes quotes from such notable authors as "Chooi-Chin Goh" and "Antares":

MY FIRST IMPRESSION OF MATTHEW, TELL ME ABOUT HEAVEN is that Suzy Ward's channelling of Matthew is of very high resolution - perhaps even as high as 99% - and that the material is totally trustworthy. You see, speaking to discarnate souls isn't new to me, and from the experiences I had in 1989-1990, I can sense that Suzy is faithfully recording the telepathic impressions received while in emotional resonance with her late son, who is actually part of a highly evolved entity directly linked with Sananda or the Cosmic Christ. The name Matthew or Mateos can be taken to mean gift of God - and the association with one of the principal apostles of Jesus immediately comes to mind.

Oh yeah, well that makes sense. I can't wait until I have my very own dead telepathic son, who I will use to channel even better books than the ones by this dopey broad. They'll be about this cool top secret spy and his torrid love affair with the Chupacabre.