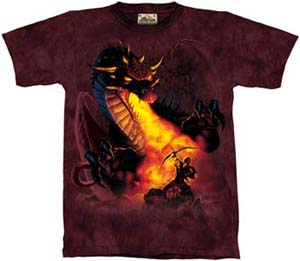 The majestic dragon can oft be spied in the dark basements of suburbia, where its nocturnal wearers use its bright plumage to attract their bearded compatriots to rousing games of Warhammer and all-night Battlestar Galactica DVD binges (the original, of course). This beautiful creature has become ever more elusive over the years, as nerds have discovered irony and now favor garments emblazoned with humorous Linux-based innuendoes. Only the rarest of nerds, those earnest few who take no pride in their nerdiness (and may not even be aware of it), still dare to accept the dragon shirt upon their corpulent bodies. The dragon is now limited to those nerds so unaware of their condition that they truly believe that the dragon shirt is rad, and that it will benefit their quest to meet women. For what fair lady, they reason, could resist the allure of a beast so noble? 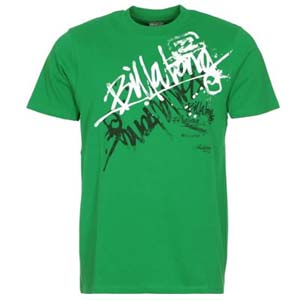 The common American brand comes in a seemingly endless variety of breeds, from the austere Nike to the playful Billabong to the gravely endangered Gecko Hawaii. Whether they represent athletic shoes, surf or skate equipment or are advertising nothing but themselves, brand shirts make a bold and simple statement: "I am willing to forfeit my identity to build the mindshare of a company." Certainly, none of the wearers of these robust specimens don them with this explicit thought in mind, but rather have entrenched their spirits so deeply into their American habitat that such considerations are nothing more than reflex. Brand shirts are often worn for the purpose of "fitting in," and they do an admirable job; since our conscious minds tune out thousands of corporate logos every day, brand shirts are the most effective urban camouflage imaginable. 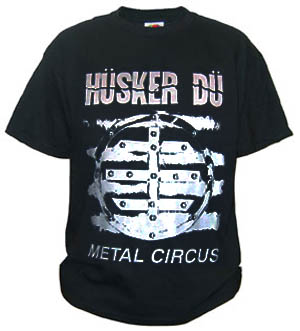 An interesting subspecies of the brand shirt is the band shirt, which is essentially the same beast but offers a comfortable illusion of individuality. Often found scuttling around college campuses and record stores, the band shirt allows its wearer a hollow identification with an artist of his choice. The peacock-like plumage of the band shirt presents a gaudy social display in which the wearer attempts to attract notice; his desperate hope is that someone, hopefully of the opposite sex, will acknowledge his taste in music. When that happens, and it probably never will, the wearer will feel famous and noticed, as if he's actually a member of the band. He may even get the fleeting, intangible impression that the band members, wherever they are, are wearing t-shirts with his face on them, and some girl is coming up to them and saying "hey, nice shirt, I LOVE Larry."