Frolixo, I'm Calling You Out!

I couldn't find an image that was really appropriate for this article, so instead have a kitten.

I've got a message for a certain Reid "Frolixo" Paskiewicz (the one who works here): enough is enough. This rivalry between the two of us has gotten out of hand. It was one thing when you were devoting full paragraphs of your articles to ridiculing me in fairly creative ways. You had enthusiasm, you had passion, you had style. How could I not respond? My honor was at stake week after glorious week, and I was always thrilled to take my own little jab back at you. I felt vindicated and knew that I had pissed you off just enough to expect another barrage of insults the following Saturday. So now I want to know one thing: what happened to us? No, let me revise that. What happened to you?

You've been getting lazy, my anti-friend. The paragraphs dwindled to derogatory references to me within the general text of your articles. The references shrank further still to quick sentences at the very end of your articles. It was like insulting me had become nothing more than an afterthought to you, something to do out of habit, not out of a true desire to make me cry like little girl. I can't even remember how long it's been since you questioned my sexuality or told me I was grossly overweight. I only have a vague memory of the last time you pointed out a specific flaw in one of my articles or pointed out a particular joke that flopped. And then there was yesterday. What the hell was that? Like your penis in the presence of a naked woman, your insult shriveled to nothing more than a picture caption. And all that the caption had to offer was another "Ben 'Greasnin' Platt isn't funny" line. Please. Zack "Geist Editor" Parsons has been calling me unfunny better and longer than you could ever hope to achieve. Hell, even when he does it, it's not that great of an insult. I don't need you to tell me I'm not funny, Reid. I've got plenty of people just itching to do that.

There, do you see what I just did? I just insulted myself better in one little witticism than you have in a month. Now that's just sad. 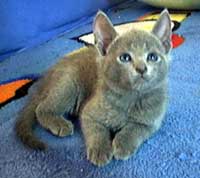 Again, this is just here to take up space. "Frolixo" doesn't bring up a damn thing in the Google image search.

Last week, I didn't bother responding to your pathetic attempt at irking me. "Also, Greasnin is the the worst person ever and I pray for his demise nightly, and at brunch." Pretty lame, Reid. The gag hinges on the comedic value of the word "brunch," which isn't much to begin with. But I gave you the benefit of the doubt. Hey, we all have our share of days when we have to struggle just to get enough words on the page to substantiate a full article. I figured you were having an off week and couldn't quite muster the energy and inspiration to really tear into me. I think it was a pretty fair assessment, considering the quality of the article itself. I made the gentlemanly decision to let you off easy, so I took all the hostility I had built up toward you and focused it on organized religion instead. Let me tell you, since then I've been called "a pathetic little bigot," "another Hitler," "one of the worst wastes of genetic material ever to manage to stand upright" and a hundred other wonderful insults by a wide assortment of fundamentalist Christians. Every one of those holy-rolling Jesus freaks managed to zing me with both originality and considerable aplomb. So when you failed to come through with a halfway decent attack on my masculinity, I was horribly disappointed.

Now, maybe you were just having another off week. After all, you did resort to writing about home repair. Come on, Reid, how many Something Awful readers do you honestly think are going to put down their Milk Duds and go build a deck? Well, at least it wasn't another lawn gnome article. Lord knows one is enough of those. To be perfectly frank, I don't think your inability to come up with an entertaining topic is the problem. After all, it hasn't hurt Zack any. No, I have a suspicion that your recent lack of ambition in the realm of Greasnin-bashing is a result of a burn out from overextending yourself. You put so much effort into trying to humiliate me that you completely ran out of juice. I can even pinpoint the precise moment when it happened. It was during your article from March the first, Let's go Camping you Nerds! (Part 1). I'm talking about this little guy right here:

A great image, but at what cost? 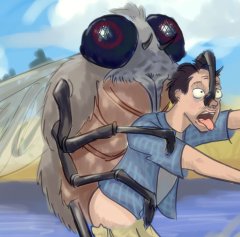 Now, I'm not going to sit here and tell you that this isn't a fantastic picture, because it is. I made the mistake of exposing a terrible picture of myself to the internet, and you turned it into a work of comedic gold. I'm giving that round squarely to you, Reid. Congratulations. You earned it. I love this picture, I won't lie. But this little gem came at a terrible price. Since then, your insults have been going rapidly downhill. You sort of rode the success of the Greasmunk the following week, but the chinks in your armor were starting to show. Your witty observations on how I suck gave way to a startling obsession with my anus. For the readers, it must have seemed quite strange to see Reid "Frolixo" Paskiewicz suddenly consumed with interest in my rectal cavity. I know the truth, of course. That was no sudden obsession - it was a relapse. I thought that the years of therapy had helped you get over the time I rejected your advances. To this day, Reid, I'm flattered, but simply not interested. The textual Greasnin-hating suffered that week, and you had to enlist the help of forum member The Yellow Yell to provide artwork depicting various woodland creatures sodomizing me (see right). What puzzled me most about those pictures is that they didn't really look like me at all. I don't really get that. There was obviously source material out there. My appearance is ripe for caricature. The only assumption I can make is that you had The Yellow Yell make those pictures for you long ago so you could desperately masturbate to them in a futile effort to expunge your anal fixation from your troubled psyche.

The truth of the matter is, Reid, you blew your proverbial load with that cheaply assembled picture of my head on a chipmunk's body. The decline of your insults continued at an alarming rate throughout the rest of March and all of April. Your attacks hardly showed any enthusiasm and started to become repetitive assertions that I'm not funny. In a bid to maintain the appearance of still being able to mock me, you contracted another goon from the forums, SlickWombat, to make the following animations:

I have to give it up for SlickWombat. Those animations might not be the most beautiful things to come out of a computer, but they are funny as hell. The problem I have with them is that they're someone else's work. People don't come to Something Awful on Saturdays to see what The Yellow Yell and SlickWombat are up to. They come to read an article by Reid "Frolixo" Paskiewicz! I don't know why they come for that, but apparently they do. They want to see your work, Reid. Goddammit, man, you're a Something Awful writer now! I don't know, maybe I just have an overinflated opinion of this site, but I read SA for years before I had the good fortune to work here, and I always held the writers in a certain regard. If you're good enough to work here, you should be able to come up with your own damn insults, not letting other people do your dirty work for you. You're letting the team down, Reid, and that's something that I don't take lightly.

Bam! The puppy faction comes in with a blow from the left at the last minute!

Alright, Frolixo, let's get down to the business of how we're going to fix this little problem we're having. If you've got any sort of pride left in that worn out husk of a body of yours, you'll want to prove that you still have what it takes to make me feel bad about myself. It's in your hands now. Remember, you were the one who started this rivalry. I was perfectly content to welcome you aboard and let you do your own thing while I put together a multi-tiered assault against Josh "Livestock" Boruff. You decided to go on the offensive, so it's up to you to maintain that position. I can only respond to what you throw at me. If you give me crap like you have been the last few weeks, I'm not going to waste the readers' time fighting back. I'm not asking for paragraphs dedicated to making me look like a jackass like you used to do. Those were nice as a novelty, but it's just stupid to take up that much space every single week for a shouting match that maybe five people actually follow. All I'm asking is that if you're still committed to going a few more rounds with me, come up with something a little better than "Greasy's not funny."

You're obviously tired, Reid. I'm not going to force you into a battle you're not prepared to fight. Take a few weeks off. Regain your strength. Collect your anti-Greasnin thoughts. Come up with a worthwhile joke or two. Stop hanging around that shrine to my anus you built in the bedroom. When you're ready to match wits again, give me your best shot. Don't worry, I'll be waiting for you. I'm not going anywhere. Just remember - in the end, there can be only one.