Al-Qadim: Arabian Adventures was released in 1992 as an Arabian Knights and desert themed setting for Dungeons & Dragons. The Monstrous Compendium and a guidebook were also released that same year. There was even an Al-Qadim computer game produced in 1994. While some elements of the Al-Qadim setting have worked their way into the larger D&D pantheon, most of this material died in the 1990s and has been beaten out in desert cred by the Dark Sun setting. The lameness (and laziness) of these monsters adapted from Middle Eastern mythology might explain why the setting was so unpopular. 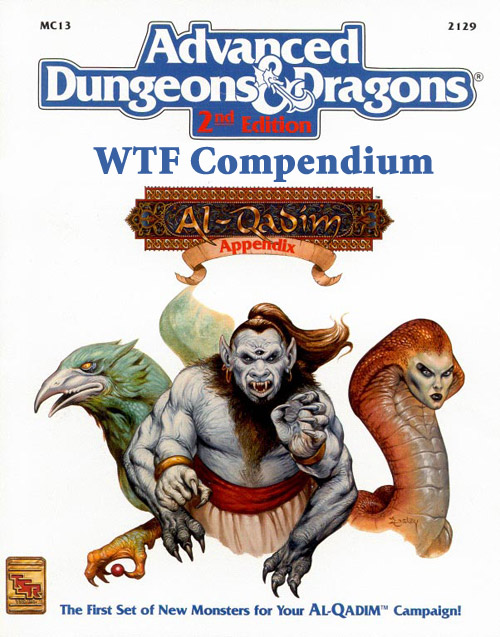 Zack: 99-Problems and a Genie is 17, according to the index.

Steve: I know you, dude. This article is going to have a lot of Al Qaeda jokes.

Zack: Way to poison the well.

Steve: I'm just trying to warn our sensitive viewers that you will be dealing with some sensitive material.

Zack: First of all, we don't have a TV show, so they're readers, and secondly, making a bunch of Al Qaeda jokes would be the most hackneyed, lame, lazy attempt at humor imaginable.

Steve: I rest my case.

Zack: When did you turn into a dickhead?

Steve: Ah, dude, I'm sorry. Bad weekend. Keith got PO'd I used web stats for my Thri-Kreen Turox in our 4E campaign and he killed him off by having a Warforged Titan throw him into a volcano, which was BS because he forgot I had initiative still and let the Titan go first and he said he already rolled when I tried to point it out, but he was rolling behind the screen and he was just rolling without saying what he was rolling for and I know he waited until he got the 16 he knew he needed to beat my bracers.

Zack: Yes, this happened to me also this weekend. This exact thing. When I ran a red light.