Message from the Future Regarding Impending Canada Geese Invasion

First they invaded our corporate water features, then they overran our golf courses, finally they took our freedom. We few humans left live in constant fear. We hide among the massive mounds of green geese poop. We hear only an endless cacophony of honks. We send this message as a warning. 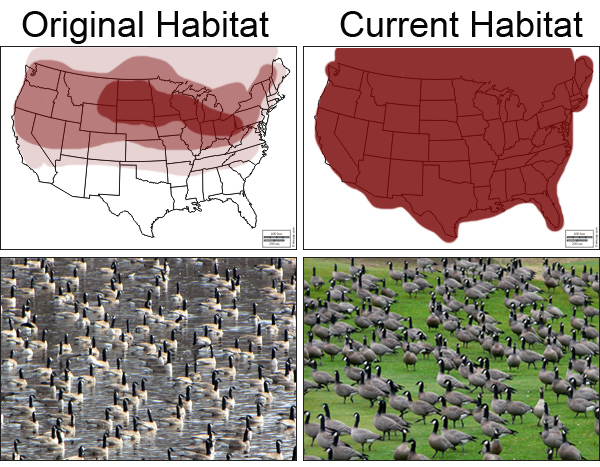 It was innocuous at first. Thousands of goslings appeared. Enough to block the highways. People thought it funny. They’d walk up the exit ramps and throw bread crumbs. The news had playful headlines. But by the second week it became clear the goslings weren’t moving. Transportation halted against a wall of little baby geese. Police were dispatched to clear the area, but the goslings were just too damn cute. We let the little fluffy fowls capture our hearts, let them waddle around the interstate while society crumbled.

And soon the fuzzy bastards joined the endless waves of adult geese to capture our homes. Their honking would wake you in the early morning. Their giant V formations blocked the sun over your town. This is how you knew it was the end. The sidewalks were slick with goose shit. Our shoes were stained green. The world smelled of river muck.

Nothing could stop them. They feared neither man nor nature. They outnumbered our military. They kamikazed into our jet engines. They hissed in a really intimidating way if we stepped on the grass. All the while, we foolishly believed that winter would save us. “The geese will leave once it’s cold,” we said. “We will taste victory as soon as the water freezes.” But we were wrong. When the first frost arrived, the beasts did not flee, but sat on the frozen lakes honking. We realized then that the Canada geese wanted not water, but the land we created.

We made the world to fit our needs, but the geese thrived better than us. Ornamental fountains, regularly mowed grass, the eradication of any predators. They loved our tastes, our habits. The more land we controlled the more geese that were produced. We only made them stronger. They were the superior suburbanites.

And in the rare moments of glory when we managed to purge the geese from one coordinate, they simply overtook another. How could we keep them away from the many gated communities, commercial parks, the entire state of Indiana?Idiots thought men from Mexico were a threat, but it was the geese from Canada all along.

We cannot break free from this hell. We cannot undue the invasion. We can only pray that you do not feed the geese.But now we must go. The honking grows closer.