Back in 2012, we introduced you to Praise Pups for Jesus, an all-dog cartoon band designed to entertain toddlers with peppy, upbeat tunes about our Lord and Savior. At the time, the site offered little more than a few crappy drawings of the band members alongside some primitive attempts at animation, a weird and sad testament to one man's pitiful dream.

Well, look out world, because these proselytizing Poochies now dwell among us in corporeal form! 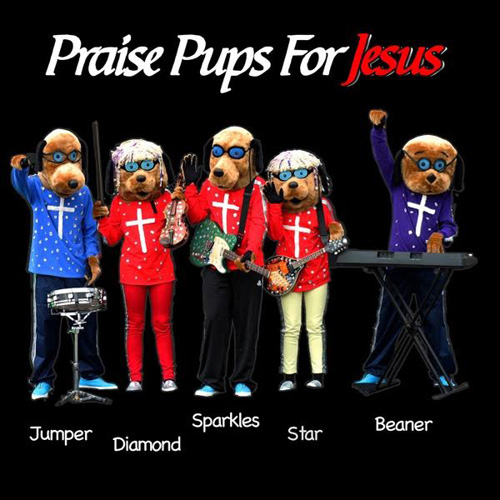 That's right! Sparkles (the lead one), Diamond (the girl one), Jumper (the cool one), Star (the other girl one) and Beaner (the, uh, Mexican one) have become manifest in the flesh! Somehow their creator, Austin Turner, managed to find people who would a) turn his childish MS Paint scribbles into costumes, b) wear these costumes in public, and c) produce a pop-country record written for these characters. Never give up on your dreams, kids.

The whole gang is available to perform their kid-friendly jams at a depressing church function near you! The photo gallery seems to lack any photos of them performing in front of an actual audience, but I'm sure this is just a weird oversight.

Be sure to check out the Pups' surprisingly slick new album! It starts out with "We Are the Praise Pups," which is immediately followed by "Jesus Died On The Cross." The Pups get straight down to business.