The Five Flavors of Grief - They’re not Just Delicious with Death, Anymore!

The Five Stages of Grief (also known as the Kübler-Ross model because I think I'm supposed to give credit to the authors of a theory I'm using because it gives their lives validation or something) details a sequence of emotions commonly worked through as one adjusts to the news that a loved one has died. The names of those stages, in order, are: denial, anger, bargaining, depression, and acceptance.

Over my life, I've come to realize that people tend to go through these stages not just as part of the mourning process, but as an initial reaction to most negatively charged big emotional developments. This is extremely useful in many situations where I have to remain calm while dealing with someone who is not. For example, I'm on the PTA board at my kids' school, a position which often finds me dealing with dramatic parents who are exasperated over some development that has nothing to do with me and that I do not care about. Like the parent who messaged us, "why on EARTH is my kid coming home hungry with most of their lunch uneaten? Who in there is NOT doing their job?!" Naturally, my first inclination is to respond, "you. You are not doing your job as a parent making sure your kid knows the value of finishing their lunch." But that won't do anything but escalate the situation, and I don't have time to litigate lunch eating (I am way too busy reading quarantine news and taking shots.)

But remembering the five stages of grief helps make the issue less personal. It's way easier to deal with a ranting mad-parent by realizing that they are just dealing with the anger stage of emotional shock. This allows me to be patient and help them achieve some level of satisfaction.

Now, more than ever, this tool is helping me deal with people who are going through some deep shit.

It was recently announced that the school would be closed until Fall. This kind of shocking news can cause parents to reach out with questions that are trivial and kind of dumb-assed. But I can't really do what I normally do (make fun of these questions in this column), because I know that they're just working through their own shock at once-in-a-lifetime news. So, when someone asks me "are there still plans to go through with Bingo Night?" and I say, "no, because people will die," and they reply with, "are there plans to do a virtual Bingo Night on zoom or whatever?" I want to say, "sure are! Just let me open this file here labeled, `emergency backup Bingo Night plans in case of apocalypse,'" but instead I gently remind myself they are going through the "Denial" stage of bitter emotional trauma.

Which is important, because I can't indulge these people to get rid of them, either. I can't say, "maybe, I'll look into it, bye!" I need to tell them that all our resources are currently being used to make sure parents know what essential services we are maintaining, such as free student breakfasts and lunches, and to get the virtual wheels turning for us to enact the policies we need to to hit the ground running next year, such as making me PTA president because I know how to seize power when there is no means for anyone to run against me.

It's also important because dealing with the Denial stage in a matter-of-fact way often leads the parents right into the next stage of grief which, unfortunately for me, is Anger. And, again, that lets me compartmentalize the interaction into one where I'm not feeling attacked, so I can do a good job of providing the parental version of "customer service."

Still, as easy as it is to realize that the stages of grief are happening to someone else, I still tend to miss it when I am going through them, myself.

I have been nursing a wet cough for a few weeks. I wasn't too worried about it, because I was checking my temperature regularly and was doing just fine. Just fine, that is, until a few days ago, when my scanning thermometer read a fever of 100.5 degrees. This prompted me to immediately take action: I went into our utilities closet and got a change of batteries, because the thermometer was obviously broken. Because I was in Denial.

When it continued to tell me I had a fever, and that the fever was getting worse, I berated my wife for going out that week for such frivolous items as food, medicine, and emergency supplies (whiskey). Because I was in Anger.

Then came the third stage: Bargaining. "I'll go to the hospital when it tops 101," I told my family. Then, "when it tops 102." When my fever hit 103.5, I entered the fourth stage, Depression. I could be seriously jacked up, here, I might spend the next few nights in a hospital.

Luckily, I knew I could only wallow for a few minutes, because I had to stiffen up and hit Acceptance before my body started taking serious damage. I went to the emergency room.

The emergency room is always a downer, but these days it's especially depressing. You can't be there with your loved ones. Luckily I came at a slow time, because I was quickly given a room and intubated with fluids. Still, I grew inconsolably sad once I was hit with one of the most common triggers for depression: Realizing my phone was running low on power.

Then a notion struck me: If going through the five stages of grief got someone through death, then, logically, going through them in reverse order should get someone done with the process of healing. Right? Sure, it made perfect sense to a brain that was rocking a 103 fever.

I had already knocked out the stages of acceptance and depression, all I had to do was go through bargaining, anger, and denial, and I'd be on my way home! I quickly looked for an opportunity to bargain for something.

That came soon enough, as they needed to take a LOT of blood samples from me. I had a weird combination of symptoms, so they were checking for everything. They sent in two nurses to take six vials of blood from my veins. These nurses were perfectly nice and professional, but one was just in training to draw blood. I've got easy veins to drain: They've gotten nice and thick from years of me curling my fists into tight balls and shaking them at the sky.

I was a bit off-put when the nurse in charge said, "now you need to avoid the wrist when trying to find a vein," and the training nurse immediately started trying to find a vein in my wrist. Fun fact: Slipping a needle under the skin and wriggling it around is not an effective way to get it into a vein. Funner fact: It is a good way to nick a vein, causing blood to gush from my arm.

So I negotiated: I said the nurse-in-training could have two spots to go nuts: Treat me like a test dummy, stab me until my arm looks like a lawn sprinkler, learn everything you need to know all at once. But, those other four blood draws had to be done by the experienced nurse. 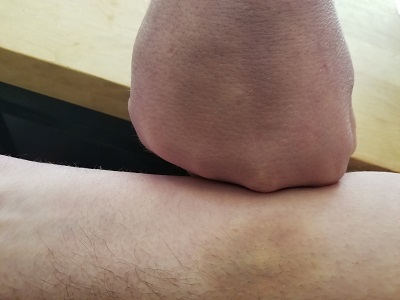 One week later, can you spot the two places the nurse-in-training took blood from?

Still, my spirits remained high: I had gotten through the third phase. All I had to do was hit Anger, then Denial, and by my logic it would be time to go home. It just took another half hour of x-rays and more waiting before that opportunity leapt into my veins: Three of my blood samples had come back tainted with bacteria, so the two nurses needed to poke me three more times.

After they did that, I stopped being angry, laid back, and closed my eyes. I was convinced all I needed was to have my Denial moment, and they would send me home. My temperature had fallen to under 100 and I was feeling much better. Even the super-weird Covid swabbing didn't bother me much at all, I knew I was just one denial away from finally leaving the hospital after having things stuck into and withdrawn from me for hours.

After 45 minutes, my doctor came in. He said my blood tests and x-rays had all come back normal, so I must have had some sort of chest infection that antibiotics could take care of. I was ecstatic, being in a hospital is always super-uncomfortable and I just wanted to go home and help my wife with the kids. I asked when a nurse would come in and take all the tubes out of my body. He replied that my heart rate and oxygen levels were still off, and I needed to be observed for at least several more hours. I said I felt fine, and asked what would happen if I just went home. He replied that I would have to sign a form stating I wouldn't sue him if I died.

There it was! My opportunity for Denial! By denying that I was going to die, I was allowed out of the hospital. Reverse Stages of Grief Theory works, people, use it anytime you want to get out of being somewhere.

Hell, the entire world seems to be using it to get out of quarantine.

Evan "Drunk Nerds" Hoovler has a new book, Teaching with Comedy, published by Kaplan. He and two other goons co-own the fantasy football comedy conglomerate, Football Absurdity. Check back every Thursday for another load from his emotional garbage truck!