We've got four films with single word titles this week. While that might appear to be an interesting statistic, it isn't. So, we have Joseph "Jay Dub" Wade reviewing Spike Lee's remake of Oldboy, Sean "Keanu Grieves" Hanson defends his Homefront with Jason Statham, Martin R. "Vargo" Schneider travels to icy climes with Frozen and Ian "Professor Clumsy" Maddison searches for stolen babies in Philomena.

EXPECTATIONS: Rule #6 on the giant plaque hanging in the Current Releases office states "every remake deserves a chance." It's true, many remakes turn out to be terrible, unnecessary wastes of time. But for every ten lame Total Recalls out there, we get a great one like Footloose. It's a bizarre exchange rate, but I genuinely hope Spike Lee's adaptation of Park Chan-wook's Oldboy delivers the goods. If anyone can recapture the brutality and shock value of the original, it's Lee.

REALITY: When Joe Doucett (Josh Brolin) is set free after twenty years in captivity, his first order of business is to beat five football players within an inch of their lives while their girlfriends look on in bewilderment. That scene is an early indicator that Spike Lee's Oldboy might become something special. As it soldiers on, however, it becomes clear that the American remake has zero tricks up its sleeve to distinguish itself from the only Korean film anyone in the U.S. has ever heard of. 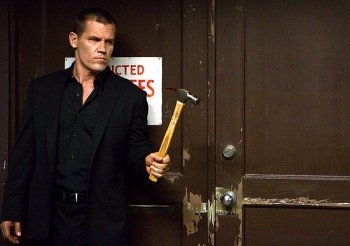 Any DIY need doing? No, that's not blood. What a silly question.In 1993, womanizing ad executive Joe Doucett embarks on a drunken bender and winds up in a prison cell disguised as a hotel room. For the next twenty years, he is fed nothing but dumplings and vodka, and watches the world pass him by on television. An America's Most Wanted-esque program informs him that his wife has been murdered, himself the prime suspect, and that his daughter has been raised by foster parents. As Joe vows vengeance against his captors, he is set free as mysteriously as he was imprisoned.

This is where Oldboy switches gears and becomes something of a whodunit. Joe meets a young social worker named Marie (Elizabeth Olsen) who offers to help Joe find his anonymous enemy. That enemy quickly reveals himself to be The A-Team's Sharlto Copley, who offers Joe an ultimatum: He has four days to find out who this man is and why he imprisoned Joe, or else Marie dies. With an iPhone in hand that he has no earthly idea how to use, Joe sets to work unravelling this mystery.

For those of you familiar with the original, the plot of the remake offers no surprises. The twist ending is largely intact, though the resulting fallout is far less outlandish. Actually, that's probably the best way to describe the film as a whole. Mark Protosevich's script goes out of its way to stick as closely to the original film as possible, even going so far as to anglicize the characters' Korean names. (Oh Dae-su becomes Joe Doucett, Mi-do becomes Marie, etc.) But the way Spike Lee shoots it all leaves the whole film feeling subdued. That's an odd thing to say about a film in which Josh Brolin slices a pound of flesh from Samuel L. Jackson's neck with a box cutter, but there it is.

The legendary hallway fight, in which our hero destroys a hallway full of thugs using only a hammer, is also present and accounted for, and it makes for an interesting point of comparison. Whereas the original was shot in a single take, tracking sideways as Oh Dae-su cuts down everyone in his path, Lee's version opens things up a bit. It's no longer a single, unbroken shot, but the fight has a fluidity to it that the original simply can't match.* It's quick, brutal, and oddly operatic. This fight scene strikes me as one that Lee worked over a dozen times to make sure it was absolutely perfect. That it seems to be dropped right into the middle of a completely different (and much less interesting) scene is its only real pitfall. 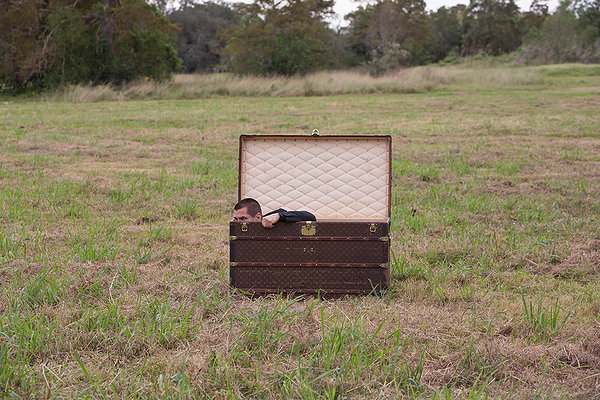 Surpri- ...I think this is the wrong address, guys.


As the film's lead, Josh Brolin handles himself well in the fight scenes. When things slow down, though, he becomes utterly lost. Our hero is immediately established as a deeply flawed character, one we probably shouldn't be rooting for in the first place. Brolin's gruff demeanor and his self-righteous quest for vengeance winds up coming off as unbearably dour. Twenty years in prison hasn't left Joe unhinged or in any way emotionally damaged; he's just plain angry. The rest of the cast acquit themselves well, particularly Copley, who makes his villain a sniveling weiner who's remarkably easy to hate.

The real problem with Oldboy is that it simply isn't invested in its own mystery. At no point does Joe seem to care about his villain's ultimatum, or any of the motives behind it, which means neither do we. As Joe tries the dumplings at every Chinese restaurant in town to find ones served by his captors, the film rushes it through a quick montage in an attempt to get us to the hammer fight already. Later, when Joe experiences a flashback, we see him standing right next to his younger self, watching some past trauma unfold. It may be a simple device to deliver a flashback, but it plays like Spike Lee being too lazy to employ any sort of visual flair. It makes me think Lee saw this film simply as a payday and not a chance to put a new spin on a modern classic.

Now, I'm not one of those people who likes to tell filmmakers what they did wrong and how I woulda done things, but I feel like Spike Lee missed a trick here. If he really wanted his film to court controversy and turn the original on its ear, his version should have taken place in Appalachia or the Deep South. He could've called it Good Ol' Boy. The twist ending would have been a little on the nose, but come on, this stuff practically writes itself. See? In two minutes, I came up with an interesting, different take on an established property. This stuff isn't that hard, you guys.

*Did you hear that rumble in the distance? I've just woken something terrible on the internet.

MINORITY REPORT: The anglicized title isn't as much fun to say either. I frequently catch myself saying "oldeuboi" in a certainly inaccurate Korean accent just for the hell of it. Drop your voice real low and say it. Oldeuboi. Oldeuboi. Oldeuboi. That's the true magic of the original. - Sean "Keanu Grieves" Hanson