You seen that boy Tooth Tooth lately, god? Damn, sure is good to see that boy back to normal.

Oh, word? He got right again?

Word. Many feared, during his near-fatal struggle with swine poisoning, that his steez might suffer irreparable damage. For, as we know, the constitution of the righteous black man is incompatible with the garbage meat of swine; in studies conducted by the Supreme Science Wisdom department of the Nation of Gods and Earths, it was determined that inhalation of even one microgram of particulate hog matter could cause symptoms similar to those associated with congenital whiteness: lethargy, busterism, extreme trifling, dry mouth, stupor, institutional corruption, increased body moistness and kinesthetic wackness. 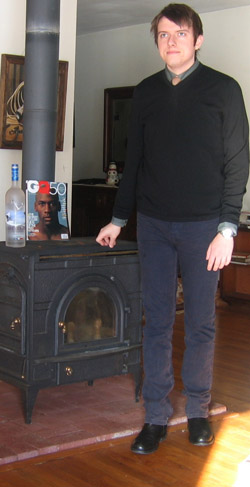 Did Jeremy Birdcastle, the ivory warlock who infected Tooth with swine meats, know all this medical fact? No man can say, god. Ain't wise to speculate, for when we gaze into the snow-blinding abyss of the white man's corruption, that shit gaze right back.

All we got is the facts, god: a judge ordered Tooth to have dinner with Jeremy Birdcastle so as to build bridges between the poor righteous teacher community and the evil alabaster Yacubian monstrosity community. Of course, he wasn't allowed to bring his eagle. At the end of the night, Birdcastle poisoned Tooth with a mote of swine matter hidden within the homo pastry nooks of a white-people dessert-- an eclair or some shit-- and Tooth was corrupted. He only barely managed to crawl back to the crib, god, clutching at his throat and coughing up blood and pig molecules all the way. Even his faithful eagle detected that he had become corrupt, and that bird split until such a time that his master's righteousness might return.

And, like I laid it down before, Tooth spent a long night in the throes of a hog-induced fever dream. In his reverie, a vision from the past came to him: a pimp's street hubris became his undoing, and only through Tooth Tooth's lesson in humility was he redeemed.

But hubris ain't been a problem for Tooth, historically. He always been pretty good at that shit.

True enough, cousin. But Tooth took the vision seriously, god. He knew that even in its swine-addled state, the soul of the original black man could not produce a dishonest spiritual vision. We all know Tooth drive a Rolls Royce Phantom and sometimes wear shoes made from cheetah paws, but deep down he always keep his mind right. He know there ain't no redemption without humility.

And, plus, it ain't like he gonna crawl back to Birdcastle's crib and whip him. In his malignant hog-languor, Tooth can't hardly lift his hand-- not like it would take much more than that to thrash the lily-white ass of Jeremy Birdcastle, but Tooth just ain't in no state, mental or physical, for violent confrontation.

So while Tooth lying there, lamenting his sad fate, a thought occur to him. He been brought low by the machinations of the white devil. His body been corrupted by garbage; he can no longer carry himself with the dignity of the original black man. He cannot walk among his people; he untouchable.

But with this disease come a strategic advantage: he could now walk undetected among the corrupt. With his swine-scented camouflage, the white devils would not fear his righteousness or cower from the talons of his eagle, a bird so reviled among whitelings for its precision eye-pecking and unmatched powers of porcine residue detection. He could enter the most secret realms of the white devil and draw nary a glance from the glassy-eyed porcelain zombies who surrounded him.

This where the humility come in, cousin. Tooth was debased by the hated flesh of the worst beast, but he knew he might gotta debase himself yet further on the humility shit: he would enter the very heart of whiteness, a place where Yacub's perverse creations vaunt their hogs to celebrity, preening them like pageant queens, handling them gloveless and rewarding them for they hideous girth.

Tooth would go to the county fair, a barbarian wasteland untouched by the teachings of Supreme Mathematics, untroubled by the eagles of the original black man-- heretofore even un-fucked-up by Tooth Tooth, because he been too disgusted previously by the mere proposition of such an unholy cracker temple to even condescend a righteous whipping. So, still pig-sick and sweating, he got on the first bus upstate--

Why the fuck he ain't take the Phantom?

Think on that a second, cousin. First, his whip still parked in front of Birdcastle crib. Second, you think Tooth could turn the key in that Phatom without it blowing the fuck up and taking out a city block?

Oh, word. I forgot he had that shit rigged with swine detectors to prevent theft by the minions of Yacub. My bad, god.