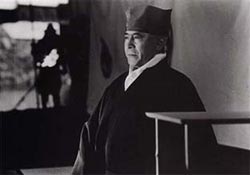 Watch out for what may or may not be a ninja!Most samurai movies worth their salt employ a cinematic device that I like to call "The Heisenberg Uncertainty Ninja". This technique is usually employed during a night scene and only after it has been established that the protagonist's life is in jeopardy.

The samurai hero will be sitting with his legs folded beneath him on a tatami mat, maybe with one of those sweet little Japanese tea services set up on a baby table in front of him.The cicadas will be buzzing in the country night of the Shogunate. The samurai will probably be meditating, but it's possible he could also be sleeping upright, like a horse that can cut a man in half. Light from lanterns will flicker through the rice paper walls of his samurai house.

When our samurai hero has reached his most extreme and intense level of inner peace a shadow will flit across the rice paper wall.Then a silhouette will slowly resolve itself against the shoji wall, probably behind or to the side of the samurai.The silhouette will linger and in those moments it becomes The Heisenberg Uncertainty Ninja. You can call it "Schrödinger's Katana", if you'd prefer.

The silhouette seems to suggest that a ninja has come to murder the samurai hero, but it could be a trick of the light.That wakazashi hilt at the silhouette's waist might just be a serving tray held by a geisha or a messenger tube carried by one of the samurai's most trusted associates. 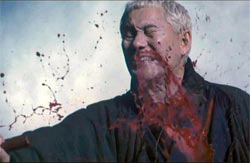 It wasn't a ninja!Most of the time the tip of a sword will spear through the rice paper and then it's time for Toshiro Mifune or Sonny Chiba to start making people spray blood out of their necks in that special way that only they can.However, every once in a long while The Heisenberg Uncertainty Ninja will turn out to be a little bit of trickery from the director. Just a phantom shadow or a harmless servant.The director may even layer on some extra drama by having Sonny Chiba accidentally cut his wife in half.

I eventually grew out of my love for samurai movies and fell in love with nihilistic Italian suspense films about stabbing women in their breasts, but that idea of the dual-state silhouette lingering at the door has haunted me.As long as it remains on the other side of the shoji panel it is just potential.It is the idea, the rumor, of a person or thing without the tangible reality and all of its consequences.

This same sort of isolation from the tangible infests virtually every waking moment of our lives. We watch TV news shows in which anchors give us second, third and even fourth hand information. We read newspapers, magazines and websites that offer descriptions of reality and opinions about reality. In our desperation for a more clear connection to the world we increasingly seek out demagogues and ideologues to place our reality in stark relief.We don't care if they are right or wrong, just that their assertions are believable and widely held.

The Internet, one of the greatest technological advancements in human history, serves as means to make this isolation self-sustaining. We can communicate as silhouettes to silhouettes and the whole of the world is pressed like a wildflower between the pages of rice paper. We can order rare items and strange gadgets from anywhere in the world, without putting on pants or leaving our bedroom. 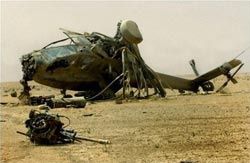 Sexy Rexy felt like going deep!Video games, once the hobby of a few math geeks in some basement at MIT, have become one of the most popular forms of entertainment, and they grow more popular with each passing day. Why not? They may present a wholly artificial reality, often governed by rules unrelated to those we face in the real world, but we can control these worlds. They empower us to do more than passively view the world.

This isolation from the world around us, narcissistic and rooted in the luxury of the first world, is the reason we watch movies like The Matrix and accept the premise as almost believable. It's why 85 million Americans can tune into a televised singing contest or a football game and not even give a second thought to gunships roving over a sea of sand or bombs exploding in crowded markets. That is no condemnation; it is the world in which we exist.Our government representatives appear on television and advise us in solemn tones that terror has changed colors or that we need to tape plastic sheeting over our windows.

Though our view of the world through the media has become global, our view of the world around us has shrunk to scarcely a few feet beyond our homes, offices and strip malls.We may occasionally vacation to a foreign country and tell ourselves that we're broadening our horizons, but we'll never stray far from the well-worn trail or the guy who will plop a sombrero on your head and take your picture with a donkey.Our needs can all be met through our media or at the local supermarket.

We dwell in a sort of solipsistic nightmare world where the ninja is eternally poised just beyond the shoji walls, ready to strike us down or just bring us a refill of tea. We practically beg for one or the other to reveal themselves to us, but they will not or can not.Instead, we must endure the anxiety of a lifetime spent in the presence of shadows viewed through screens.

Can we change our ways? Should we? Is our culture the most advanced or the most depraved? Has the world moved beyond the need for the connections to family, friends and community that existed before we could text them or play Halo with them on Xbox Live?

I'm sad to say I can't presume to offer answers to these questions as I am still wrestling with them myself. I do know that when a brave man rode across New England on horseback yelling, "The British are coming!" and the British actually showed up.You could reach right out and touch them as long as you didn't mind losing a few fingers to their snapping jaws. That brave man will be remembered through the ages, in song and in History Channel documentary, as Israel Bissell.

At least that's what Wikipedia tells me.