Inside the Oval Office

My friends, we are living in a politically charged time. The United States is on more shit lists worldwide than ever before. Being an American has a very different meaning now than it did five years ago, both here at home and abroad. The pressures on the average American to support the nation are enormous, but what about the pressures on the one American who represents us all? There is no more stressful job on this planet than being the leader of the free world. It's like being an air traffic controller, only times, like, a million. Yes, it's not easy being George W. Bush. That's why Something Awful is proud to take you inside the Oval Office in this short teleplay that I like to call... "Inside the Oval Office." 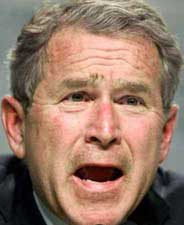 Scene: The Oval Office, interior, day. GEORGE W. BUSH, President of the United States, Commander in Chief of the Armed Forces, Leader of the Free World, defender of Truth, Justice, and the American Way, sits behind his desk putting the finishing touches on a pair of rudimentary paper dolls attached to the ends of pencils. Upon completion, he holds the dolls at arms length, examining them. He then begins to tap them against one another, enacting a play of his own creation. There's something ironic about it - a odd twist of the play-within-a-play device, but more importantly it's just sad.

George W. Bush: "I'm gonna getcha, Saddam!" (In a Russian accent, for some reason) "No you're not, Comrade Bushski!" (In his own voice) "Oh yeah? Take this, Saddam and the Iraqi people!" (He begins violently hammering the doll that represents Saddam Hussein with the doll that represents himself.) "Boom! Pow! Crack! Fizzow! Rat-a-tat-tat-tat! Ba-boom! Don't mess with Texas! Eeeeeeeeeeeeeee-blammo! (In a Russian accent) "Oh no, stop, I'm going to die or possibly go into hiding!" (He pauses for a moment, then puts down the dolls and presses the intercom on his desk. In his own voice) "Janine, is President Hussein dead or just in hiding?"
Janine, the President's secretary who I just made up: (Over intercom) "We don't know, sir."
George: "Oh, uh, alright." (He picks up the dolls again.) "You can't hide, or alternately die from me, Saddam!" (In Russian accent)"Watch me!" (He makes the two dolls chase each other in circles. In his own voice) "You come back here right now or I'll get my dad!"
(ANDREW H. CARD, JR., Chief of Staff, enters and approaches the desk.)
Andrew Card: "Mr. President-"
George: (Startled) Eek! (He throws one of the dolls over his shoulder and starts furiously writing with the pencil end of the other.) "Dear economy. I believe I speak for the American people when I wish you a speedy recovery."
Andrew Card: "Uh, Mr. President..."
George: "Oh, Andrew! I didn't hear you come in." (He presses the intercom.) "Janine, why didn't you tell me Mr. Card was coming in?"
Janine: (Over intercom) "I didn't know you wanted me to."
George: "Well, could you do that in the future?"
Janine: (Over intercom) "Yes, Mr. President."
George: "Alright, now, mister... uh... Mr. Card..." (He starts to snicker.)

The plucky sidekick!Andrew Card: "What is it, Mr. President?"
George: "Oh, I'm sorry, I just can't get over it. Your last name's a word! That's so cool to me!"
Andrew Card: "Uh, yes sir, so is yours."
George: "It is?"
Andrew Card: "Yes sir, a bush is another name for a shrubbery."
(There is a long pause, as GEORGE stares blankly.)
Andrew Card: "Sort of like a mini-tree."
George: "No... way! A mini-tree! Now that is A-1 sauce hunky dory in my book. I have got to tell my dad about that. Hold on." (He picks up the red phone.)
Russian Voice: "Da?"
George: "No, I'm looking for my Da."
Andrew Card: "It'll have to wait, Mr. President. You have some very important matters to attend to this morning."
Russian Voice: "Da?"
George: "No, my-"
Andrew Card: "Mr. President, please!"
George: "Oh, alright. Bye, dad."
Russian Voice: "Da?"
(GEORGE hangs up.)
Andrew Card: "Thank you, sir. Now, as I was saying, you have a very full schedule this morning. Our foreign interests are in terrible jeopardy, and people are starting to take notice here at home."
George: "What, you mean, like, my wife?"
Andrew Card: "No, sir, the American people."
George: "Oh, good. Because I was going to say, I'm pretty sure Laura's cool with it."
Andrew Card: "Sir, please, this is serious. Your approval rating along the Eastern seaboard is almost nonexistent. The West coast isn't much better. The only place where you've still got strong support is in the heartland, and I don't know if that will be enough."
George: "Whoa! Hey! Slow down a peg, little turtle. I have support in the where?"
Andrew Card: "In the heartland."
George: "What the heck is that? The heartland? Is that like Kumbolaland?"
(ANDREW CARD stares ahead for a moment.)
Andrew Card: "Yes. Sure. Kumbolaland, fine. Whatever."(Secretary of State and four star general COLIN POWELL enters the Oval Office and crosses to the desk, standing next to ANDREW CARD.)
Colin Powell: "Good morning, Mr. President."
George: "Whoa! What the lethal injection is going on around here?" (He presses the intercom.) "Janine, didn't I tell you to let me know if someone was coming in?"
Janine: (Over intercom) "Oh! I thought you meant just for Mr. Card."
George: (Brightly) "Oh! Ha ha, I see what happened! Well, that clears it all up then! Hey Janine, did you know that my last name means mini-tree?"
(JANINE bursts out laughing. Soon, GEORGE is laughing uproariously, as well.)
Colin Powell: (Muttering to ANDREW CARD) "What is wrong with him?"
Andrew Card: (Muttering to COLIN POWELL) "I have no idea. He doesn't know his ass from the hole in the ground he ordered the national guard to blow yesterday, but he knows what Kumbolaland is."
Colin Powell: (Muttering) "Kumbolaland, really? What a strange reference."
George: "Alright, bye bye!" (He releases the intercom.) "Sorry about Janine. She's new, or possibly imaginary. Well hey hey! Colin Powell, my man! What's shakin', brother bacon? You cool? You fresh? You chillin'? Catch ya on the flip side!"

The sassy black guy!Colin Powell: "I'm sorry, are you telling me to leave?"
George: "Nah, we's gonna bust some caps up in this piece. You down, sheezy-Poweezy? Gonna score some fly honeys on the four-one-one with my P. Diddy Method Man! Downin' Colt .45 on the curb with yo momma! Aye-eeeeeeeeeeeeet!"
Colin Powell: "Mr. President, I appreciate the effort, but for the last time, I'm black, not retarded."
George: "There's a-"
Colin Powell: "I swear to God, Mr. President, if you ask me if there's a difference one more time, I will beat you to death with my Congressional Gold Medal."
George: "I see."
Colin Powell: "Do you?"
George: "West Sigh-yeeeed!"
(COLIN POWELL punches GEORGE in the face.)
Andrew Card: "Jesus Christ!"
George: "Oh, you got me again, you rascal!"
Colin Powell: "It keeps being necessary. Now, if we can get down to business..."
George: "Yes, of course you're right! This is no time for procrastulation!"
Colin Powell: "Okay, uh, I really walked into that one. Anyway, Mr. President, you've got to make a decision about Liberia."
George: "Oh yeah. SARS, right?"
Colin Powell: "Uh, no sir. Not SARS. The rebels. Charles Taylor has vowed to fight to the very end. As you may remember, sir, our stated position is that we will not send in American troops as part of a peacekeeping force until Taylor leaves."
George: "Oh yeah, yeah, yeah. Right. So, we wait."
Colin Powell: "Yes, but the thing of it is, if Taylor leaves, then there may be peace without us. We'd look rather silly."
Andrew Card: "Also, Mr. President, we wouldn't get the approval points that come with sending troops basically anywhere on the other side of the planet."
George: "Hmm... I see. It's a very delecatable situation. I'll have to think some more about it. I don't want to send our boys over there too hastily, risk letting them get SARS. What else is going on?"
Colin Powell: "Well, we still haven't actually found those weapons of mass destruction we were looking for in Iraq. Now, I stalled for time with the U.N. by giving them a complex series of excuses. It should take them another week or so to figure out that nothing I said actually made any sense. Between now and then, we either have to find some weapons of mass destruction, or come up with an incredibly plausible reason why our searches are coming up dry."
George: (Nods seriously, then furrows his brow and touches his fingers to his chin in a contemplative gesture.) "You lost me. I thought we were the U.N."
Colin Powell: "U.S., sir."
(COLIN POWELL grabs GEORGE by the back of the head and slams his face into the desk.)
Andrew Card: "Jesus Christ!"
George: "Don't mess with Texas!"
(COLIN POWELL slams his head into the desk again.)
Andrew Card: "Jesus Christ."
George: "Subliminable!"
(And again.)
George: "Narf!"
Andrew Card: "Jesus Christ! You're going to give him brain damage!"
Colin Powell: "Who's going to notice?"
Andrew Card: "Fair enough."
(Secretary of Defense Donald Rumsfeld enters.)
Donald Rumsfeld: "Mr. President, I apologize for the intrusion, but we have serious matters to discuss. Good morning, Colin. Good morning, Andrew."
Colin Powell: "Don."
Andrew Card: "Morning, Don."
Janine: (Over intercom) "Mr. Rumsfeld is here, sir."
George: "Thank you Janine. A little late, though."
Janine: (Over intercom) "I'm pretty sure Mr. Card and Mr. Powell are still in there, too, sir." 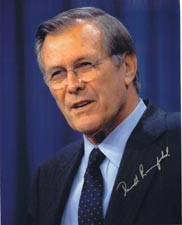 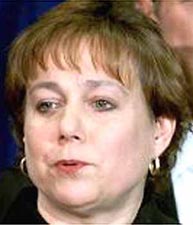 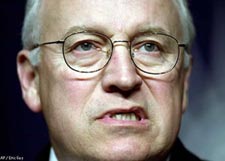 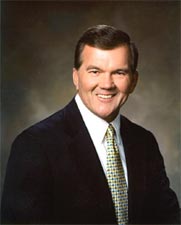 The convenient plot device!(TOM RIDGE, Secretary of Homeland Security barges in.)
Tom Ridge: "Oh no you don't!"
Dick Cheney: "Tom Ridge?"
Tom Ridge: "That's right! Mr. Vice President, you can't be here. It's not safe. We can't have you and the President in the same room together. The terrorists haven't attacked in a while, but that's all the more reason to believe that they might be building up to something sort of big possibly! Maybe an attack on the White House perhaps! We can't risk the chance of the eventuality of both of you being killed!"
Andrew Card: "He's right!"
Dick Cheney: "That's it!"
George: "What's it?"
Dick Cheney: "Think about it! The American people hate this administration, but no one in this country is cold-hearted enough to not support us after terrorists kill both the President and the Vice President in one fell swoop. Not even the Mexicans! Our approval rating will be through the roof!"
George: "That's just crazity enough to work! Now all we have to do is sit here and wait to be blown to bits."
(Everyone stays in place, silently. COLIN POWELL checks his watch after a few moments.)
Janine: (Over intercom) "Mr. Ridge is here, sir."
George: "Oh, Janine!"
(Everybody enjoys a good, hearty laugh. Fade to black.)

There you have it. Rebuilding foreign nations, finding weapons to appease the United Nations, deciding whether or not to commit U.S. troops to a peacekeeping effort in Liberia, dealing with dictators, a bickering and often irrationally violent cabinet, and an inept and largely fictional personal secretary, and George W. Bush's day is just beginning! I hope that this presentation gave you some insight into the hectic and incredibly stressful life of our embattled President. The man's got a tougher job to do than any of us can even imagine. That's why it's your patriotic duty to make life a little easier on him by voting him the hell out of office as soon as humanly possible. Thank you for your time and attention.