The Large Hadron Collider and You!

The Large Hadron Collider is scheduled to become active in less than a month, and yet most people in the world still don't understand what this important device will do. There have been a lot of misconceptions and false information presented by the mainstream media, so Something Awful's famous team of respected science educators have put together this short guide to help you understand what the collider is and how it will affect your life. 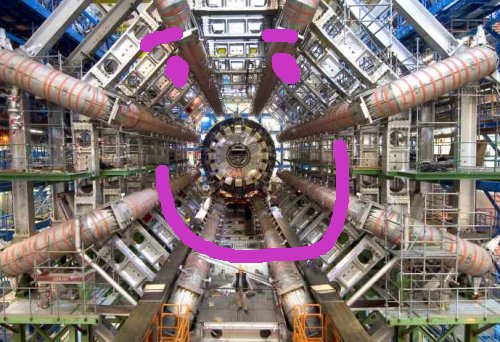 As the name implies, the machine works by colliding very very small particles called protons in an effort to create the submicroscopic equivalent of the World's Craziest Car Crashes video series. The general consensus in the world's scientific community is that these collisions will shed new light as to how awesome explosions can be even when they are really small. Another good reason scientists give for colliding protons is that it will help us develop our understanding of what happens in nature when a giant machine smashes two protons together.

The collisions are performed on a large, ring-shaped track that straddles the border between Switzerland and France. On this track are two specially designed go-karts upon which protons can be loaded through the use of a patient Swedish man named Sven who has unusually steady hands and a tiny pair of tweezers. Once the go-karts are successfully protoned, they are pushed very quickly around the track by two guys who let go when they are about ten feet from each other, cover their faces and BAM, proton collision successful. It is possible that the collision might create temperatures higher than those of our sun, but this will happen for only a brief fraction of a second so the guys pushing the karts should be fine. At the worst, some light maiming might occur.

After the protons have collided, the real work begins. Using cutting edge "bullet-time" technology borrowed from Hollywood, scientists will watch the explosions in super slow motion and then rate them on a scale from 1 to 10 asses being kicked. Then they will pour another round of drinks and load up the go-carts again.

The collisions caused by the Large Hadron Collider will actually be used in four separate experiments. These experiments are as follows:

Color in the Large Hadron Collider!

Myth: The Large Hadron Collider is very unlikely to destroy the world.

Fact: The moment they turn on the collider, or "Apocalypse-Creating Death Machine" as the technicians working there affectionately refer to it, the world will instantly be destroyed by dangerous shockwaves of scientific energy spreading all over the globe. The scientists know this will happen, but plan to turn on the machine anyway because all scientists are evil.

Myth: The Large Hadron Collider is an important tool for furthering our understand of the universe.

Fact: Who cares? It's just studying stuff that's even smaller than an atom, so the practical applications of the technology are basically non-existent. At best, we might get a better version of the microwave out of this. Or an improvement on velcro. I think science created velcro, right?

Myth: It is funny and original to call it the "Large Hard-On Collider".

Fact: This one is absolutely true. Some other good names along the same lines are the "Big Boner Machine" and the "Huge-Dick-Smasher-o-matic"

I hope you understand exactly how the collider works now. See you and everyone else in the world on the other side!