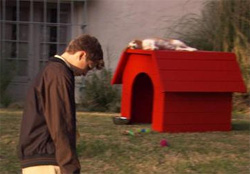 Pump-drain afflicts everyone.From the vantage of the casual observer of popular culture and current events it seems as if America is suffering from a malaise. I'm not talking about wildfires or gasoline prices, although those are the sort of little thing that can temporarily bum a country out, I am referring to the recent pervasive lack of enthusiasm here in the United States. We hang our heads, our shoulders slump. We shuffle along, existing rather than living.

Once, many years ago, we Americans faced each new day with a surfeit of energy. Dawn broke smiling across our cities and suburbs and those things with tractors and lots of plants we used to have. Strange flightless bird creatures screamed the new day out to us and we rose from our beds, inhaled the cinnamon sunbeams, and burst from the blankets with excitement.

We would race through our morning routine and arrive at school or work with a smile on our face and a whistle on our lips. We derived satisfaction from our toil and we enjoyed our free time. Meats were cooked on grills, jokes were told around coffee machines and when the time came to watch a sporting event we had a foam finger handy. Our lives could be described in superlatives like "awesome" or "terrific."

These lost salad days reached their height in the 1990s and no artifact embodies this apex of awesomeness quite like Jock Jams. For those of you unfamiliar with Jock Jams, it was a series of CDs released by Tommy Boy Records and (later) ESPN containing the simple exuberant music played at stadiums to excite the crowd. The first Jock Jams album was released in 1995 and included songs like C&C Music Factory's "Gonna Make You Sweat" and Technotronic's "Pump Up the Jam."

Grunge might have captured the narcissistic morbidity of the early 1990s, but it was Jock Jams that encapsulated America circa 1995. It was dumb music, by dumb people, for dumb people and it was supposed to make us all dumber.

We just didn't care. The world was our oyster and we were excited as hell. We wanted to stomp our feet and do the wave. America was number one and we were prepared to lean into a camera with our face painted in stars and stripes and scream, "WOOOOOOOOOOOOOO!"

Jock Jams was more than just a cultural milestone in the United States. Its ads were in heavy rotation on US television to the point that the rapid mix of musical hooks became the soundtrack of our lives. The commercial began with fight-announcer Michael Buffer shouting "Let's get ready to rummbbbbbblleeee!" and blasted through a mix of songs as the track list scrolled past on the screen. Clips of women gyrating further served to thoroughly pump up anyone within a hundred feet of the television.

With those commercials Jock Jams entered a pumping-up feedback loop with America. The more pumped Jock Jams made us, the more we craved Jock Jams to pump us up. The first volume of Jock Jams reached number 30 on the billboard charts and was quickly followed by a sequel that made it to number 10. As the 90s wore on no less than eight Jock Jams albums would be released, each charting well and each further pumping us up for the next Jock Jams.

Veins bulged in the collective head of America and our teeth gnashed with extreme pumpitude. We were redding out on enthusiasm, fully engorged on cheerleaders and gridirons, ketchup-covered hotdogs and sweaty ball sacks. This couldn't end. It just couldn't. Not until we won. We were too pumped to accept anything other than total victory.