Midnight screenings nationwide have been filled with screaming and hysterical laughter. This is due to a mix of abstract terror from Paranormal Activity 2 and self-blaming frustration at the misleading marketing for Hereafter. Ian "ProfessorClumsy" Maddison and Joseph "Jay Dub" Wade went to see what all the ruckus was about.

EXPECTATIONS: I hated the first Paranormal Activity (though the official stance differs from my own opinion). Let's get that out of the way right off the bat. I know you're preparing death threats to send me right now, but I promise I will give Paranormal Activity 2 (or Paranormal2Activity, as the posters are calling it) a completely fair appraisal.

With the first film, we watched two incredibly rich young people in a failing relationship do absolutely nothing for ages until eventually something horrible happens and it ends. The characters were unlikeable and the story was uneventful. There is every chance that this sequel will improve greatly upon its predecessor, but I have a feeling it will be more of the same.

REALITY: Well, it certainly is an improvement, but only marginally so. While it is true that Paranormal Activity 2 is very much a retreading of the same ideas, there is a little more meat here. At times it almost feels like a really good horror film, which makes its general lack of storytelling inclination all the more disappointing.

Taking place over a long period before the events of the first film, Paranormal Activity 2 tells us the story of how the nameless, faceless demon that would go on to terrorise Katie and Micah started with Katie's sister in an attempt to steal her newborn son. The demon gets up to the same familiar tricks of just fucking with people for shits and giggles, probably Tweeting about them on his iPhone so all his demon friends can keep up to date with how he "just slammed da door 2 da babby's room lol."

The fact that the demon itself is never really described or named made it difficult for me to accept it as a horror antagonist. Maybe what makes the film so effective to most other people is that their imaginations make the demon more horrifying than the filmmakers could ever convey. My own imagination obviously doesn't run that way, because I imagined it as a kind of plucked chicken with the gigantic head of Gary Busey in a jester's hat using a magic fairy wand to make scary stuff happen. Also, I named him Laurence. 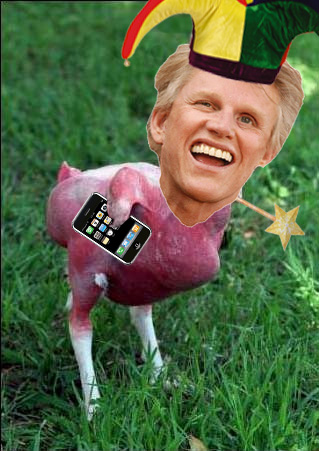 A local police artist's mock-up of the terrifying Laurence.The film relies on jump scares just as much as the first; rather than trying to create a real sense of dread, it uses long sections of silence to make you anticipate the next OOGIE-BOOGIE scary moment.. What I found particularly annoying was that almost all of them involve some sudden loud noise. You know how loud noises make you jump? Well, Paranormal Activity 2 is an exploration of that fact in movie form. Clang! Oh my God, what was that? A pan fell down, because Laurence thinks it's hilarious.

And there's another issue: None of the jump scares are story-driving events. They are simply there to make the audience and the characters go "AGH!", and often they punctuate a scene in a rather odd way. At points when you expect something interesting or frightening to occur, nothing happens. Sure, you get a jump, but sometimes these things look like they're going to continue and instead the scene ends and everyone has moved on. It doesn't feel like a cinematic narrative, but rather a series of clips like the ones people send you on April Fools' Day with a note that says "Look really closely at the baby in the background" and then a zombie face pops up and makes you swear.

What we have here, then, is an exercise in audience manipulation. Everything is constructed to evoke scares and forsake all other emotions and thought processes. The characters might not be entirely believable, but they are certainly much more watchable than the leads from the previous film, and the filmmakers even threw in some of the classic "innocents" - you know, children and dogs - just to make us care as much as possible. They even make a character of the pool cleaner, which is a plucky little scene-stealer in its own way. On top of that, there is also the classic "superstitious Mexican housemaid who turns out to be right all along," because there's nothing like a good racial stereotype to keep audiences from having to think about things.

The characters don't interact with each other much; generally they interact with the camera either individually or in small groups. This is because the camera itself - and by extension, the audience - is the main character. Again, this is not storytelling in any real sense, but pure manipulation to get a reaction from the crowd. On the one hand, all of this keeps it from being a real cinematic experience, but on the other hand it becomes something else which is worth experiencing in itself.

SPOILER: The dog eats the baby

Late in the film, very late, when the shocks get more and more frequent and the story starts to advance, it almost started to feel like a genuine horror film. I finally started to get a sense of dread from the underlying themes, and the sequence that followed, though directly reminiscent of the vastly superior Blair Witch Project, was hugely enjoyable. Just when I thought this film had experienced some amazing turnaround and was going to end brilliantly, they hit you with a plot dump and throw in some bombastically loud and ridiculous climax that just sets everything back to zero.

As a horror film, it doesn't work alone. It offers no real ideas for you to mull over, no moral questions or fabulous ideals are explored in any real depth. To watch this alone would be doing it a disservice, because it isn't really a film. What Paranormal Activity 2 does best is work the room. I saw it with a very vocal crowd, all screaming, jumping, laughing at themselves, yelling at the characters on screen. This is rare enough amongst British audiences that it becomes remarkable when it does happen. If you're going to see this, see it with a packed house of young idiots. The real spectacle isn't happening on screen, unless I am simply too jaded and desensitised to grasp it, the real show is in the seats behind you. It plays its collective viewership like a fiddle, and it's impossible to not admire that.

MINORITY REPORT: In the case United States v. Ian Maddison, we find the following facts to be true: 1) Ian Maddison is British, and by extension, joyless; 2) Ian Maddison likes X-Men: Origins: Wolverine, and no one in his right mind likes that fucking trainwreck; 3) Ian Maddison likes to spoil plot twists all willy-nilly in his review; and 4) Paranormal Activity 2 was fucking terrifying. Court is adjourned, bitches. (I still love you, Ian.) -Sean "Keanu Grieves" Hanson