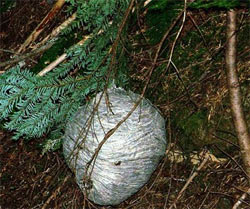 HELLLOOOOO YOUR DUMB DAD here again. No driving for a while because i have bald tires and had a Wasp nest on the underside of my car the size of a beach ball. I didnt realize it until i stopped at a drive thru and the guy at the first window started screaming and grabbing his face and trying to close his little windows so i pulled up to the second window and that guy started screaming and hit some kind of bioterror alert siren or insect siren so I got the heck out of there and drove home and figured out it was all because of the huge nest attached to the bottom of my car
I ran about 30 feet away into the front yard and started hucking rocks at it trying to knock it loose but I was only really hitting the car itself so i ran up on it with the hose and soaked the heck out of that thing. It started buzzing like crazy and then the nest peeled off from the car and flattened and it was still buzzing so i got back in the car and did some figure 8s on it for a while and then parked the car as close as physically possible to the house so i could jump directly into the door. The nest is gone but i still have bald tires and a few wasps hanging around

A man online told me that our lives are often shaped by little decisions so make every one a good one. Who would have thought that solidifying the path the entire rest of my life as a young father would take could have been as easy as shouting "Stay-At-Home Parent, Called It" with a mouthful of spanish peanuts. Salty papery red peanut skins once caught in my mustache rained down on your mother's birthing body and some of them stuck to your gross gooey head when you were coming out but from that moment on we were destined to bond in some way. If you still like peanuts that is probably why, because some peanut salt (sea salt i think) got into your afterbirth while you were still in the afterbirth and maybe you could taste it? Or maybe your mother could taste it because I think the bubble or whatever was still in there. It plopped out later and smelled
You know how people come home smelling kind of like their workplaces. i bet midwives smell real bad. We had a disagreement about the birthing process because your mom wanted to go to a midwife who was a lady she knew from her work who was a part time midwife and a notary public also. we went to her house to discuss it and this is when I found out that both she and her husband were each missing an arm and thats how I knew something fishy was up and then they started talking about how normal they are and how they scuba dive and make love so I stood up and said We Have To... Cut This Short... which i thought was very appropriate and not disrespectful and went and sat in the car until we left and from that day forward every time I drove by it I would point at it and say "That's The Amputee House" i remember pointing it out to you when some of your friends were in the car and they laughed at me until I told them the story which gave those teens something to think about that wasn't all fun and games.
These days I get along with amputees except for ones who show me their things up close because it usually smells like sweat or medicine and it is gnarled like a wizards staff