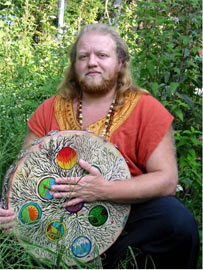 My legal hotline has encouraged me to begin Court Action based on the fact that the manager of The Wicca Buffet attempted to imprison me in the cubby hole under the salad bar for eternity with his chaos magick / burly arms until the police got there, which they never did because he never actually called the police and I waited in the cubby hole until they closed at 10:30 and let me out a few minutes before they locked up, and then told me I could have left at any time. Lets get to the facts:

Dateline Last Thursday: found an old CD someone burned full of pictures of Razor Ramon and another bunch of photos of a man wearing a pair of pants that says "THE GAMBLER" across the butt. Then there was also a picture in there of The Wicca Family Time Buffet, which was funny to me until I got hungry and decided to treat myself. "Handsome Man Ravishes Nice Buffet In The City Today" -The newspaper talking about my birthday as it was supposed to happen, which was ruined bigtime by the owner of Wicca Family Time Buffet, because I was told to leave the buffet. This was an outrage to me because I was eating politely and keeping the hooting to a minimum as requested, but the guy in charge (Who Wears A Nighgown To Work I Might Add) "Geoffrey" which, lets be honest, is the most pretentious collection of letters ever assembled as well as the most pretentious collection of fat human body parts ever assembled, told me to beat it very rudely. "Get Outta Here! You're Eating All The Shrimps Out Of Every Dish, Deadbeat!" said the mad Wicca man, to which I retorted "Actually, I Prefer The Term 'Negligentleman'" He was getting red in the head but the clown had obviously never seen the kinds of front flips and back flips i can do off a queen bed. 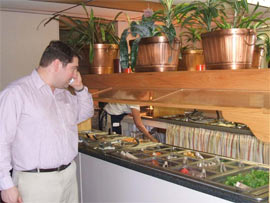 A short exhibition of my skill level took place and then Geoffrey came at me with a sharp instrument (tongs) so I climbed under the salad bar into the cubby hole and waited there because he shouted "The Cops Are Comin, Pal" to which I said "Good!" and he replied "All Right" and I said "Fine" and he said "Fine" too. He was long gone in the kitchen or wherever but I kept shouting and groaning to get the attention of patrons and let them know what was up, that I was being held against my will in a buffet, that we live in a country called America and you can do whatever you want if you set your mind to it, and please stay in school.

After about 20 minutes the boss came back and wanted to have a heart to heart with me, his arch customer. While I was in the cub hole he kneeled down to tell me about the time his coach died because he was at football practice and tripped over something. "Hey Coach I Found A Gun On The Field..." (said this in a grover voice???) "Throw It To Me Boy" then a tragedy happened and that is what caused his Wicca Buffet syndrome and therefore caused the ruckus we were in now. I told him I understood him now and asked if I could go use the bathroom and he said yes. His office was right near the bathroom so I sent his wife a message:

"Dear Wife, Are Son Is Gay. I Might Be Gay To. I Don't Know If I'm Gay But Are Son Is Defanately Gay. Remember When Coach Died From The Gun. It Really Is Me. Sincerely, Hus Band. Email.com"

Was I really able to leave early? Maybe... but I got my comeuppants!!!