You dare to violate the tomb of Fashion SWAT and disturb the 1000 year slumber of two of the baddest bros in apparel history? Prepare to get Fashion SPOOKED!

Dr. Thorpenstein: BooOoooooOOOo! You hear those rattling chains and woeful wails? I do believe some SPOOKS are approaching! And I don't mean that in a racist way, because we're all white people here-- no, there's nothing ethnically scary here, just MONSTROUSLY scary: Zackula and Dr. Thorpenstein approach!

Zackula: Our inhuman hunger for a fashion frightmare has summoned us from beyond the skull-and-rhinestone-encrusted gates of eternity to once again rake our wicked talons across some really bad Halloween costumes. Devil's Night deserves better! 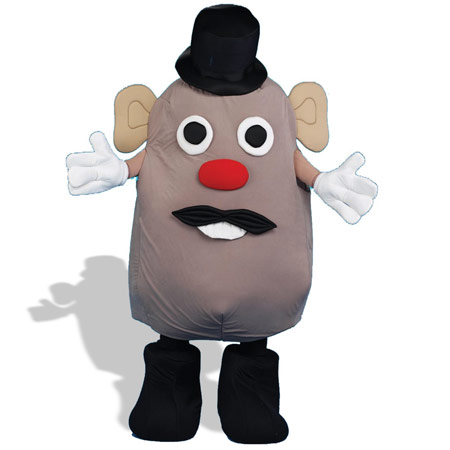 Dr. Thorpenstein: Be the life of the party in this blank-faced, shapeless potato costume! Includes saucy penile nub!

Zackula: If you wanted to know if a scrotum could express stunned horror here is your answer.

Dr. Thorpenstein: You can't use your hands and it looks terrible, but at least you paid a hundred and ten fucking dollars for it!

Zackula: It's from the Buy Costumes "You Could Have Done This in 10 Minutes Yourself" collection.

Dr. Thorpenstein: Yeah, you could just get a t-shirt and write "POTATO" on it in sharpie and you'd still come out ahead, because people wouldn't be saying "what the hell is that bloated abomination supposed to be?"

Zackula: They should market it as a great costume for people who plan to fall down and pass out where they fall.

Dr. Thorpenstein: Yeah, it's a great costume if you're planning on getting drunk and going to a party at a place with a lot of stairs.

Zackula: Just a big foam cushion for you when you fall down like a fat little chug pig. Go on chug pig, roll around next to the keg, groaning from the liquor sicks and slowly filling your top hat compartment with vomit.

Zackula: Or if you're trying to concealed carry at a halloween party. As a patriot that is very important to me. I don't wear any costume that won't allow me to conceal at least eight shotguns.

Dr. Thorpenstein: You can't really see out of it, but if you fall it's like being in a bouncy castle. I'd say "a bouncy castle full of vomit," but that's the natural state of all bouncy castles.

Dr. Thorpenstein: God, I still can't get over that horrible little nub. Combined with that beckoning hug gesture and those blank eyes, the terrible little genital bump is really creeping me out.

Zackula: You'll be at a friend's friend's party, you won't know anyone, you'll climb the stairs looking for the room where everyone is smoking weed and you'll open the wrong door.

Zackula: It'll be a coat closet and this guy will be looking back at you, not moving, just holding his arms wide and offering his little nub thing. And staring. The dead staring.

Zackula: People have been burned as witches in Africa for doing less.

Dr. Thorpenstein: Or maybe your homeboy is in there just licking his palm and rubbing that little nub like crazy and the potato is just standing there kinda pulsing and vibrating like a colony of daddy long legs.

Zackula: Steam starts shooting out of the tip like a bag of microwave popcorn.

Zackula: I like how the description says one size fits most adults. I mean, i know they just put that there to cover their ass, but imagine being the dude that this doesn't quite fit. Like you're going to the party as Tommy Tater and your girlfriend is going as Tina and you just can't quite wrestle this sack down around your body. "Uhhhhh, honey, I've got a problem..."

Dr. Thorpenstein: Speaking of Tina... you might think that genital nub was just a fluke of manufacturing, but check out what she's got going on down there: http://www.buycostumes.com/Tina-Tater-Adult-Costume/17868/ProductDetail.aspx

Zackula: There's no way these things reproduce through genital-on-genital contact. Tina probably waddles around with fist-sized potatovums dropping out of her indentation and Tommy follows her around shooting steam out of his nub.

Zackula: Really a downer when a pair interrupts your party, tracking their mash all over the place and making that blowing-on-a-bottle hooting sound when they get excited. Dead eyes staring, useless arms wiggling at their sides.