HELLO!!!!! I am writing to tell you not to get mixed up in the world of raffles!! Out of a love for easy money I set up a raffle and told people in the town to call me and write me a letter and donate things to be won which would be huge publicity for your business or yourself and great for me too. Only a few people gave me free gifts to give away but it was enough to sell a lot of tickets. In fact one man bought over 30 tickets and was by far the highest roller of the bunch. 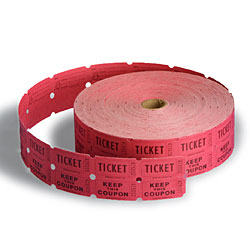 When the drawing started I got on the megaphone and that big spender of the bunch was the first to win big and go home. the first prize was a sealed envelope from something called "Betty's Mom Solutions PRIZE INSIDE" so he came up and opened the envelope and inside was a bunch of confetti and a sheet of paper that said "Six Hundred Homebirth Credits" on it. I told him he must be a big deal to get something like that and it sounds like a really good prize but neither of us knew what it was and to make a long story short we started yelling at each other a lot and decided to go figure out what's what at the Mom Solutions later that day

We found the address and went over there and knocked a bunch until a woman wearing a sweater with a huge airbrushed baby head on it opened the door. We asked what a Homebirth Credit is worth and if we could switch it with money. "If You Calm Down I Will Give You Some More Homebirth Credits" a statement that made the part of my brain that likes free stuff go nuts, but I made the mistake of asking "What Exactly Is A Homebirth Credit" which made her lead me to her video tape library. She started out the first video by saying "Here Is A Basic Homebirth" and popped in the tape and we watched a naked woman lay around her living room floor groaning for about 8 minutes and then the horrific birth started. the lady got out from behind the camera and started getting real excited and yelling and I got uncomfortable and wanted to shield my eyes but I couldn't out of respect for the baby. There was a dog running around the room barking and sniffing the birth also. I saw the whole thing and then the proud lady turned off the tape and said "Six Hundred Is Enough Credits For 2 Of Those Or For 1 Deluxe Homebirth" so I asked "What's A Deluxe Homebirth" and then we watched another video that was exactly the same except it was in one of those huge blue inflatable pools and it gunked the whole thing up.

The winner man seemed like he was getting tired (it was really late) so he left with his credits. Another raffle rule we changed that day was that a bulldog should not be able to win a flatscreen TV 3 times in a row. Tough lessons learned!!!!! GOODBY!!!!!!!!!!!!!!

This is what the pool that got gross looked like!!!!