I have donated over 300 soup labels to the local elementary schools this year so I think I deserve at least seven minutes of your time.I hope you had a pleasant summer. And please know I am not upset that you did not reply to my previous two letters. I held an important position in the PTA for 34 years, so I know how busy one can get when those naysayers won't stop nipping at your heels. But then you discover they're married to a sometimes homosexual and your problems suddenly go away. I've seen that Michelle Bachmann's husband -- if you ask me, he's "lightning in loafers!"

But I write to you about a gravely serious matter.

You may remember my great nephew Jace. He is a nice boy with strong legs and an SS tattoo on his arm for his favorite football player, Steve Sanders. And I tell you, he was full of vinegar when he got off that bus from labor camp! I know Jace probably missed all the friends he made skipping stones under the honeysuckle tree (I assume camp has not changed much since my own girlhood), so to make up for it, I let him keep all the pennies he could roll in a single afternoon. And when that loving child asked me if he could use my basement as his new secret fort, I agreed that he and his little friends could do so as long as they remembered to tidy up afterwards. I have heard about the trouble children encounter on the streets and would rather have them underneath me as I watch Judge Judy than out in the slums learning about earrings and sideways hats.

This is where my troubles began. Now, I am a firm believer in "judge not lest ye be judged," but I was alarmed by the attitudes of Jace's new friends. The largest one was a Jamaica man who refused to tell me his name and once took an entire cookie sheet of snickerdoodles out of the oven before they could finish baking! Jace informed me that he and his pal were going to start a dog-washing business in their little clubhouse, and I couldn't help but have my heart warmed by this new streak of responsibility, even if the Jamaica man wouldn't 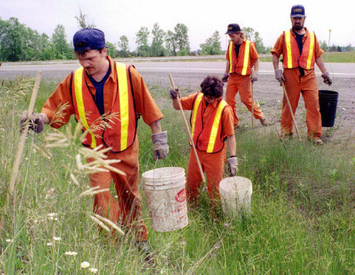 Jace's labor camp even helped clean up the overpass. There's a peach pie in somebody's future!stop screaming whenever I asked questions (guess we never exported manners to that island!). I know from experience that nothing teaches a child the value of a dollar like a part-time job; back in the days of my youth, Opal Doubek and I would sell lemonade to strikebreakers, thirsty from a long day of clubbing and reloading their guns. Three times out of ten they would give us a nickel for our efforts, and we treasured them.

But I think poor Jace got in over his head, as his business model was far more elaborate than our lemonade stand of old. All throughout the afternoon, customers would come to my house with their dogs, but these were not dogs like I have seen before. These dogs had muscles like the wrestling men on TV, and wore cages over their faces. One time, I was in the kitchen and tried to pet one of the dogs, and then it started trembling and had an accident all over the floor and the Jamaica man yelled at me again. To think: just a year after getting expelled for skateboarding near the vice-principal's vandalized car, and Jace was already back on his feet, taking care of sick animals? I made a note to buy him an extra toy from Radio Shack for his birthday this year.