The First Eleven Days of Burris 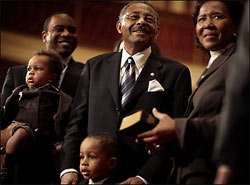 Some of the greatest moments in history escape our notice until their repercussions can be felt by future generations. It is a rare privilege to be able to witness with full awareness the unfurling of that great tapestry as it occurs. To truly savor the pivotal moments in our nation's history as they happen. That, my dear, sweet friends, is perhaps the most heady of wines to be sipped from the cup of any true patriot.

Eleven days ago, as the nation stood captivated, a rarely used hatch was thrown open in the unhallowed depths of the Capitol undercroft and Vice President Dick Cheney emerged briefly from his revivifying bath of human corpuscles to snarl out the oath of office for the latest senator. By the Vice President's word, and the secret Moloch brand of the fire-heated Senatorial signet, Roland W. Burris of the Centralia Burrises was made the junior Senator from Illinois.

Cheers rang out the entire length of Roland Burris's living room, which is his house's largest room by square footage, though is not so long in any one dimension as his first floor hallway. It was a long and arduous journey that brought Burris to office in our nation's darkest hour, requiring more than two weeks of TV interviews and dozens of telephone conversations with people Roland Burris did not like all that much.

Though it was cathartic to finally be Senator, Roland Burris knew that his work had only begun. The nation was facing wars on two fronts, an economy in turmoil, and all of the problems left behind by the previous administration. Only one man could hope to seize the levers of power and avert national catastrophe, but in the eleven days since taking office, how has Roland W. Burris brought about the change he promised? What has he accomplished? 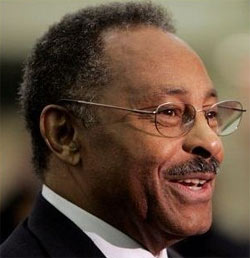 Told by Senator Durbin to, "Make someone your bitch right away. The bigger the better." Cut in front of Hatch in lunch line, but felt chastened by his angry glare. Three bean soup and oyster crackers in the Senate lunch room.

Walked right the hell up to Tom Carper from Delaware and just straight up took his lunch. It was chicken breast and cornbread.

Said, "This food is bullcrap for punks to eat" and threw the whole tray and everything into the garbage.

Senator Carper could not even say a word and/or was a bitch.

Day off. Tried out the rowing machine in the Senate gym, looked at one-bedroom apartments, and ate a whole package of Nutter Butters.

Wondered when would be the right time to ask in a Senate meeting or whatever about having a day named after Roland W. Burris. Called his daughter, Rolanda, told her about Roland W. Burris day.

"Will we get a day off school?" she asked.

"Hell yes," Roland W. Burris answered. "And they will close the banks and everything."

Ate pizza in bed. Went jogging. Became tired and distracted and went to see Benjamin Button. They had a movie theater where you could drink beer and watch the movie and eat more pizza, which was great. Senator Burris hated the movie completely.

Introduced S. 2994, a vote condemning Benjamin Button for "boringness" and "no guy turns into a baby the older he gets." Failed after an impassioned speech by Senator Robert Byrd, age 2.

Attended inauguration of Barack Obama. Mouthed words to oath of office more quickly than Obama could repeat them, thus making him technically the first African-American President of the United States. Immediately phoned engraver and asked for it to be included on giant marble funeral monument.