I live in Brier Hill, New York-2, near the Canada Wall. We get lots of military broadcasts and all sorts of weird Canadian broadcasts that the military tries to jam. We're also pretty close to an Area Bleed, which can cause other weird effects. Growing up I thought the weird things that would come across the TV were ghosts. My dad told me they probably were, ghosts of whoever made the broadcasts.

Dad is gone. Mom too, but my aunt lets me stay with her while I finish school. In my spare time I have been recording some of the ghosts from TV on my old set. I don't know what they mean or what they are sometimes, I don't even always know they're people, but I record them.

I hope you think they're interesting. 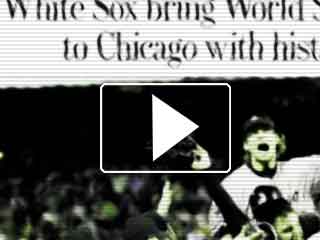 Description: This video begins with a fade-in from scrambled signal. Waves of distortion and color shifts sweep over a copy of the Chicago Tribune newspaper claiming to originate from October of 2005. The camera pans up and down and left and right. It is difficult to impossible to read smaller text on the paper, but the larger headline is visible. "Believe it!" and "White Sox bring World Series title back to Chicago with historic sweep." Indistinct instrumental music plays in the background. The sequence repeats two times before a military tone overwhelms the audio and the channel returns to a scrambled signal.

Observations: A really weird clip. The Chicago Tribune offices were destroyed along with most of the city in the Betrayal of 1997. The White Sox have played for Washington D.C. since 1999 and the 2005 World Series was won by the Houston Astros. I don't know why someone would want to pretend Chicago was still around or that a different team won the World Series. I have seen similar clips airing of newspapers, always with heavy jamming. Apologies for the quality, my recorder wasn't hooked up so I had to use my camera to capture this one.