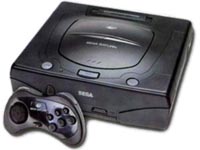 All I Ever WantedAlyxander was the richest kid in school. Though we kids don't know shit, we all knew how rich he was. His backpack was always packed with action figures-not the basics, but the airships and accessories and all that extra garbage that no one else had. After school, he'd use a twenty dollar bill and spend it all at the candy shop. His name even, spelled out like a Russian Czar, seemed extravagant. We were all in awe of his wealth, but our respect just went up tenfold in our ten year old minds when he announced that he (his parents) had just purchased a Sega Saturn.

I was the only kid in my school district to get free lunches. In reality, it meant that I was poor, but none of us knew that. Though they had their lunchables and enormous turkey sandwiches with chips and veggies, they were still jealous of my government assistant pizza slice. Standing beside their Starter jackets in my hand-me-downs, it was apparent that I didn't have half the cool crap they did, but it didn't matter since we all felt pathetic to Alyxander and his Sega Saturn. I had dreams about that damn console. I, a little ten year old, would run though pixilated environments, having fun, defeating monsters, finding love. It was magical to me. Whatever Sega did to advertise somehow worked, grinding its importance deep into my conscience. But deep down I knew the truth. I would never, ever, ever have one. It wasn't a surprise, but it still burnt. At some point kids realize that their dream to become an astronaut is impossible and an innocent level of sadness waves over them as they discover disappointment for the first time. That was me and the Sega Saturn. I realized that this missing piece of my life would never come into fruition. So, imagine my glee when out of the blue Alyxander invited me to his house to watch him play. Though he wouldn't let me touch the controller, I happily agreed. Weeks earlier I had watched the movie Aladdin, and I somehow thought a genie had answered my wishes.

One condition: I carry his backpack home. Fine, okay, whatever it took to

Pretty much Alyxandersee the system. I nodded in fullagreement as he handed it to me. My frail arms tensed for a second before dropping it to the ground. For some reason he decided that he had to take home all of his textbooks that day. A special project, he said. With a sigh, I heaved the backpack over mine and felt it crush down on my belongings as Alyxander unlocked his bike. It looked like a Harley Davidson. "Look how fast I can go" was the last thing I heard him say before he rode off, leaving me in front of the school with two backpacks. I didn't even know where he lived. I could have, should have, given up, but determined to see the Sega Saturn, I slowly followed in the same direction.

So while he sped off on his bicycle that looked like a motorcycle, I lagged behind lugging his heavy-ass backpack. He quickly disappeared in the distance, leaving me to wander aimlessly through the wealthy side of town. Every ten minutes he'd reappear in the distance, quickly approaching me. I waved and tried to block his path on the sidewalk, but he just zoomed past on the grass, laughing manically before quickly disappeared again. After the fourth or fifth time I saw him pull into the driveway of the biggest house I'd ever seen. I staggered my exhausted body up the brick path and set his backpack on the asphalt. "Don't set that down on the ground." He said. Sweat had seeped through my Goosebumps T-shirt and my hair was slicked back, but I apologized and lifted it back on my shoulder.

Within a second, his mother came out in a pretty dress. She offered something to drink, but Alyxander said we weren't thirsty. I didn't want to disagree. He did, however, want an Italian Ice, and while I had never heard of one, I wanted one too. In front of his mother, Alyxander was really nice, and he told me to head downstairs while he got it ready for me. I giddily agreed and hurried down into the "rec room."

It was bigger than my living room and his television was twice the size of my family's. It was really overwhelming. He had every console and a large bookshelf stacked with games, but, most importantly, there was the Sega Saturn sitting alone on the floor flanked by games. My eyes were transfixed on the black box, my imagination going wild over all the fun we'd soon have playing. Well, him playing while I watched.