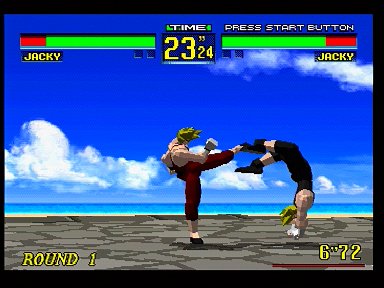 I couldn't waitAfter a few minutes he came down the stairs holding two cup. "Lemon or Cherry?" He asked. I said lemon, but he just answered "too bad" and handed me the cherry. I sunk the spoon in and took a bite of the seemingly expensive desert. It tasted hot. Really hot. Like cartoon smoke comes out of your ears hot. My eyes swelled up and my throat burned. Though it was awful, I didn't want to be rude, so I dug in and took another bite. As tears ran down my face, he started laughing. I tried to smile, but my lips felt raw. After my third bite he admitted to pouring hot sauce on top. And, according to him, not the usual hot sauce, but the kind he got when he visited Uruguay the summer before. I wasn't sure where Uruguay was, but I was certain that they made really hot hot sauce. He said sorry, and then went upstairs to get me another one.

While he was gone, I tried to flip through the manual of Virtua Fighter, but I could hardly see anymore, so I just looked at the pictures. The game looked great. He came running down the stairs with a grape popsicle and handed it to me. I hated that color the most, but with my mouth on fire, I had no other option. Again, the second I put it in my mouth, he started laughing, and through his snorts and knee slapping he said he put salt in it. Though my mouth was numb from the non FDA approved hot sauce, I was still frustrated. I set the popsicle beside me, and he offered me another desert, but I quietly turned him down with my swollen tongue and running nose and asked if we could start playing Sega.

"Of course, that's why I brought you here." He said, hitting the power button. The enormous television screen went black and then little white particles flew across the screen to make the logo. My heart swelled up as the game started. With the enormous control in his hands, the other out of my reach on the ground, he quickly flipped through the menus and sent it into a loading screen before I had time to focus on anything beyond the mesmerizing colors. The tiny ticker went across the screen dot by dot. Though it was taking awhile, it was a good kind of waiting. The anticipation was driving me wild. It was foreplay to my childhood desire to play videogames. Alyxander, on the other hand, wasn't so excited. He huffed and yawned. Then when he couldn't stand his boredom any longer, he started spinning the controller around like a lasso. "Watch this" he said as he released the cord, slammed the controller into the wall, chipping the paint. The controller fell limp against the carpet. He continued to complain about load times as he grabbed the slack and smashed the controller into the console again and again. Through his laughter, I watched the image of the load screen flick on the screen. Why wouldn't he just let it load? Why is he breaking the Saturn? Is he not aware of its magic? But instead of stopping him, I just curled up on the sofa and watched him desecrate the item of my dreams.

The game eventually loaded, but Alyxander didn't noticed. He pulled the controller out and threw it against the wall before moving on and grabbing the console. With both hands he bashed it against the floor like a caveman trying to break a coconut. The screen flashed black with every slam, the sounds muffled and cracked. Please stop, I thought. Pretty please.

And just like before, the genie answered my wish. His mother jauntily interrupted the massacre with two peanut butter and jelly sandwiches. She asked if we were having fun and Alyxander told a long made-up story detailing the excitement while I sat quietly squeezing the couch with a fake smile. Though he stopped bashing the console, the image still flickered and wavered across the screen, but his mother didn't seem to notice.

The sandwiches seemed to calm him down. He took a big bite and 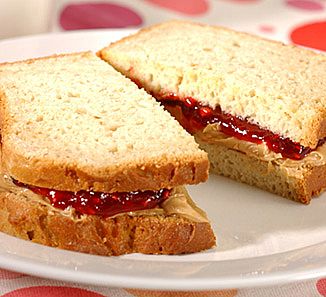 Tool of Destructionchewed loudly with his mouth open. Through all the food in his mouth he sloppily asked if I wanted to see his favorite game. I nodded. Without hesitation he sprang to his feet and hit the open button. The disk was still spinning around, but he just grabbed it and threw it over his shoulder. Then, to my horror, he grabbed the remnants of his sandwich. Carefully, he pulled the two pieces of bread apart until he held a slice in each hand, peanut butter in the right, jelly on the left. He tossed the jelly behind him just like the disk and then pressed the other slice face down into the disk slot before slamming the lid down. Peanut butter oozed out of the sides.

I couldn't watch any longer. I excused myself from the room and went upstairs. His mother was sitting near the door and she asked if I was going home already. I slowly put my backpack back on and told her that I felt ill. She offered to drive me home, but I said I'd rather walk, rather be alone for awhile.

I don't think I looked up from the sidewalk the whole way home. The following year we covered the Holocaust in history class, and when my teacher told the class about Nazi soldiers raping women in front of their husband, I solemnly understood. No one should have to see what I've seen.