Shave and a Haircut

There comes a time in everyone's life when they suffer a moment of doubt. There's a brief period where a person's dignity, self-respect, and common sense simply can't win in the fight against doubt, poor judgment, and stupidity. For me, that moment was just a couple nights ago. It's not surprising that it happened just before Valentine's Day. A lot of people must feel a bit worse about themselves when that annual lovey-dovey Hallmark fest comes along and they don't have anyone to be all cute and disgusting with. In my head, I thought that by Valentine's I'd have someone special to buy those little rock hard candy hearts for. We'd spend hours just reading the mushy writing on each one, then chipping the holy hell out of our teeth by trying to bite them. It would be great. Alas, reality has always been a harsh mistress to Greasnin, and not the fun, porno kind of mistress. It became abundantly clear to me that I was not about to spend Friday being caressed by nubile co-eds, and I began to despair. And in my hour of darkness, I picked up a razor. Then I did something very, very stupid. 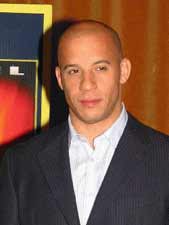 Specifically, I put the razor in my friend's hand and let him shave my head completely bald. None of this crew cut crap that so many angsty youths end up with when they say they're going to shave their heads; I'm talking right down to the skin. My hair was never all that long to begin with, but I've certainly never had anything like this before. Now, I know what you're thinking. Why shave my head? Why not express my frustration over the complete lack of any that I've gotten lately in some other manner? What could possess me to turn this sexy beast into this goofy bastard? Alright, well first of all, I object to the term "goofy bastard." Sure, the second picture isn't as good as the first, but you have to bear in mind the differences in lighting and angle. I mean, that first one is a great picture of me. I am sex in that picture, but it's not because of the hair. There are plenty of bad pictures of me with hair, such as this. But that's beside the point. I'm still a sexy beast, if not an even sexier beast than I was before. Now that my hair has grown back in a tiny bit - sort of a whole head stubble - I actually really like it like this. Even beyond that, though, shaving my head was my way of thumbing my nose at genetics, and you know how I like to thumb my nose at abstract concepts.

Baldness among the males in my family is a pattern in the sense that "1, 1, 1, 1, 1" is a pattern. I've been using extra-strength Rogaine since I was seventeen. Now, I'm not knocking Rogaine. They make a terrific product and I wish nothing but the best for everyone involved with the company, but that stuff is one of the most disgusting substances known to man. It used to come in these little spray bottles that you could use to give the target area a few quick spritzes in the morning and evening. That wasn't so bad. Sure it stung your eyes and breathing it in left the taste of nail polish remover in your mouth for an hour, but it got the job done. Then they discontinued the sprayer, which left only the eye dropper. 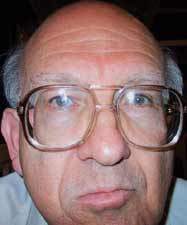 As a mist, Rogaine isn't the most pleasant thing on Earth. As a liquid, it's almost like it's designed to punish balding people for their deformity. "Take this, bald people," it seems to say. "You were fools to go bald! Now you will have to drop an ounce of freezing cold, sticky, disgusting liquid on the top of your head twice a day for the rest of your bald little lives!" You apply it to the balding area, and it immediately dribbles to safer ground. Rogaine is smart. it knows that if it stays in the bald spot, all out in the open like that, it's at the mercies of the sun, wind, and rain, not to mention any curious birds. "Forget this," says the Rogaine. "I'm not staying up here on top of Mt. Baldy. I'm heading for the shirt." And it does just that, making an immediate beeline for the collar. Of course, the only response you can have to all this nasty, frigid liquid going down the back of you neck it to swat at it and try to stop it before it goes all the way down your shirt and settles in your pants, where you decidedly do not need more hair.

Naturally, that just pisses off the Rogaine. "Ooh," it declaims. "Baldy McWantshair's got himself an attitude!" Being the smarmy bastard that it is, it decides to show you a thing or two by getting all over your fingers in truly astounding qualities. You can touch the tiniest drop of Rogaine and it will soak your entire hand in sticky, foul gunk. If you try to wipe it off on something, let's say your shirt sleeve, as you might do with water, the Rogaine will actually go through some kind of mitosis. The shirt sleeve will be smeared with the stuff, which does not soak into fabric at all, and your will still be completely drenched. Nothing gets Rogaine off your hands other than a few minutes of vigorous scrubbing with soap and water, and even then you can't be completely sure. Chances are pretty good that sandwich you have for lunch is still going to taste like rubbing alcohol and ink if you had the gall to touch it with your hands. 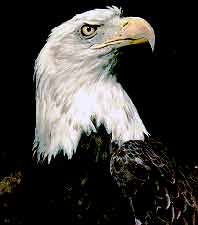 Not actually bald. Actually an eagle.

So am I done with Rogaine now? No, I suppose not. If I have intentions of growing my hair back and I don't want to have an unsightly thin patch, I'll have to keep using it while my head is shaved. However, it's a lot easier to get the stuff on the target area and have it actually get into the scalp when you don't have any hair. So Rogaine and I are on fair terms right now. I don't have to worry about it to much, and it's good to me in return. As far as male pattern baldness is concerned, though, it can kiss my ass. You hear that, genetics? You think you're going to catch up with me? Ha! I don't even want hair! What do you say to that? I look good without it! I don't mind being as hairless as those cats everyone hates. It's not the prospect of being bald that used to burn me, it's balding. It's one thing to have a receding hairline. Until it gets pretty well along, you can play a receding hairline off without too much trouble. When the balding patch starts in the back, though, that's just unsightly. If I was tall enough that no one could see the top of my head, it would be one thing. I'm a short guy, though. People see the top of my head whether they want to or not. I wasn't about to pick up chicks with a head that looked like my skull was trying to escape.

So now my once lovely locks are gone. Actually, they haven't gone far. A guy down the hall has all my hair in a little ball. It's pretty much the freakiest thing I've ever seen. I'm fairly certain he's going to use it for voodoo. Well, if I turn into a mindless zombie slave and end up killing one or more of you, I apologize in advance. In the meantime, I'm enjoying my bowling ball-headedness. Everyone wants to rub my head for luck, which frankly is more action than I've seen in a while. Sure, February in Connecticut is cold as a witch's teat, but it's worth the suffering if it'll impress the ladies. So ladies, if you feel yourselves becoming impressed, let me know.