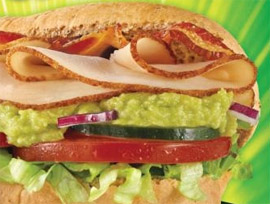 I just want to start this meeting with an apology. So the Green Lantern wasn't the most successful movie to promote Subway's new avocado sub, but as the man who came up with Jared and "$5 footlongs", I always have a backup plan. The main problem with promoting your new avocado spread is simply the fact that it looks disgusting. I've eaten about a million avocados and a dump truck of guacamole, but it's never, ever looked liked that. Nuclear scrambled eggs. That's okay though, easy fix. Aim it at kids. They love gross stuff and anything that has commercials, and their parents are too weak to say no. Step one is renaming the avocado. As we talk, we're finishing the paperwork to copyright the name "Green Squish" as the new name of guacamole. Kids will love it. As that logistical thing goes through, here are some awesome movie tie-ins we could use to make Green Squish the condiment of the year.

Dream big with this one. So there he is, Godzilla, Japan's biggest export, just wailing on Mothra. Okay, and he's punching and kicking and lifting that bug and throwing it into a skyscraper. This is all CGI, remember. Anyway, there are these kids just chilling on the ground watching. They're all cheering for Godzilla. Go Godzilla, they say, we love Godzilla! Alright, but then things get dark. Mothra beats its wings and hits Godzilla in the face. Scary, right? There is a super-duper close-up of the hit--close enough to see the pores on Godzilla's face--and the hit makes his face wrinkle up and stuff. Well, three of the pours bursts open and a thin green stream of liquid shoots out and rains down on the three kids. I forgot to tell you that those three kids each had a boring sandwich in their hands. Okay, so the pimple liquid (which is actually avocado (which will soon be called Green Squish)) lands on their turkey meat and they're all like, "RADICAL!" and they take a huge bite right as a guitar riffs. Then everyone thanks Godzilla and Godzilla winks back as he is tossing the moth guy into a set of power lines.

Okay, hear me out on this one. Remember Slimer? Kids do. They love that thing. Ecto Cooler came out for years after the movie came out. Some of the boys in the back did a little math and we figure that with Slimer, Subway will sell somewhere between six and twenty thousand subs, but we're leaning towards the higher numbers. So the commercial opens up with Bill Murray in his ghost busting gear screaming. Slimer charges through him and gets him all gross. But, see, in the original flick, Bill's covered with gunk, but with a little photo magic, when he gets up, he'll be covered in guacamole, excuse me, Green Squish. There will be Bill freaking Murray, number one star, absolutely slathered with your product. The man responsible for Caddy Shack and Dumbo Drop Then, get this, he looks in the camera and says, "I just got [whatever we want him to say]." Possible ideas: I just got avocadoed or I just got Subwayed. Think about it.

I'll be honest with you guys. There is no Nickelodeon Ooze: The Movie. Yet. We'll make some phone calls and see what happens. But, in my opinion, it doesn't matter. Kids go crazy when they see that ooze stuff. When a celebrity like Heidi Klum gets oozed on camera, 40% of our child aged testers immediately went through puberty. Think about those numbers. Anytime that demographic thinks about sex, a Subway sub will pop in their head. Your sandwich will be the pink Power Ranger of the 2010s.

Jim Carrey's a goldmine. No matter how bad his movies actually are, kids will like it. Pair those odds with the fact that his new movie is filled with computer animated penguins. I mean, let's do the math: computer animation + Jim Carrey +penguins = the periodic symbol for gold with money signs to the tenth degree. Whoa, right? Whoa. So the commercial opens up with some clip from the flick, something "ha ha" good. It just has to have all the parts of our math formula. Maybe a fart joke. Or a series of wacky noises. It doesn't really matter. Alright, then you do a close-up of one of the penguin's smiling face and it's all, "I'm cute and making fifty billion dollars for the movie studio" and the kids at home will totally flip. They want that penguin. But they can't. Mom says no. So that penguin poops, defecates, it takes a shit right there as the kid watching. And that goose-like turd comes, dangles for a second, and then drops right onto an opened face meat-ball sub. Boom. Then one of the Subway lackeys, what do you call them? Right, one of the "sandwich artists" gets the sub, cuts it half, wraps it in paper, puts it in a bag, stuffs in a few napkins, and then Jim Carrey comes and unwraps it and takes a big bite and says, "Smoking!" Pretty sweet, huh? So now these kids see that the Green Squish is from a computer animated penguin and they love it. Then Jim "Money Maker" Carrey eats it and they need it. You're not simply selling those kids subs, you're selling them souviners.