Junior stood on the tenement's stoop, absently checking his phone as one of the neighborhood junkies approached.

"You got the cash this time?"

The disheveled man nodded, producing a handful of crumpled singles, some smeared with blood. Junior clucked his tongue in disapproval but waited patiently as the junkie counted the money out with shaky hands.

"That's enough for a five spot."

Junior turned to his scouts on either end of the street, who both signaled the all clear. Positive that no cops were around, he pocketed the money, then wrapped his arms around the junkie's waist and held tight.

The other man's shaking eased, replaced by a content sigh as the five second hug came to an end.

"Has the subject said anything?"

"No sir," replied the security guard. "We detained him, then called your office. Didn't want to risk breaking protocol and giving the guy's lawyer an out."

"Good man," Tanner replied with a nod. "I'll have a talk with your superior later. See if we can't get you on the fast track to a promotion."

Agent Tanner entered the holding room. Inside sat a long table, two simple folding chairs, and a forlorn detainee with his hands on the table. Something didn't seem right...

Tanner moved to shake the suspect's hand, but the man only responded by recoiling in fear. After all, how could the man return the gesture with mannequin arms?

Cursing under his breath, Tanner pulled up the bottom of the suspect's baggy sweater, revealing the man's actual arms. They had been taped to his sides.

A hug smuggler. The sixth this week. Something big was coming, and Tanner was going to get down to the bottom of it. 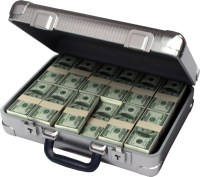 The Columbians stood on one side of the warehouse. Ordonez, as ever, was in a fantastically tasteless white suit. His men held uzis and distrustful stares. Across from them, the American held a large briefcase. His men wore earpieces and military issue assault rifles.

Without a word, the deal went down. The briefcase was opened, revealing three and a half million dollars in unmarked bills. Ordonez nodded, and his men stepped toward the American bodyguards with open arms. As the hugs began, Ordonez took the briefcase and slipped away.

It took the American a moment to realize that the hugs were only being given with one arm, the other loosely held just inches away from the recipients' torsos. The product was cut. That Columbian bastard.

Before the American could give the command, the warehouse erupted in gunfire.

The detective pressed a handkerchief to his face, doing his best to ignore the apartment's foul stench. Aside from the body, there was little left in the dingy room. Furniture and possessions alike had been fenced for a string of increasingly desperate quick fixes.

He gestured for the medical examiner to begin. The older man slipped a pair of scissors under the corpse's ratty shirt, careful to avoid the vomit stains as he cut the fabric, revealing an all-too common sight.

The dead man's sides were covered in arm-shaped bruises, the telltale sign of a hug junkie.

The detective turned away, memories of his sister flooding back.

Will I ever save one of them, his tortured mind cried out, or am I doomed to relive this nightmare for the rest of my days?

Senator Kerslake sank into bed. On the television, his own image stared back at him, a recording from one of the talking-heads-arguing segments that the 24 hour news networks so dearly loved, and which spurred emotion to override rational thinking in so many voters.

"Real Americans are watching the values this country was founded on disappear day by day as the president does nothing," his television self announced. "The hug epidemic is an affront to all of us who believe in family, God, and personal responsibility. There is an undercurrent of outrage as the government collects our money, then talks down to us while spending it on frivolous things instead of eliminating the hug problem. If this arrogance continues, our country is going to erupt."

The senator raised a glass of whiskey to his television, then knocked it back. As the program continued in the background, he adjusted his harness.

The mechanical arms locked into place, snug against his sides. Senator Kerslake flipped a switch on the harness and closed his eyes, tumbling into a blissful oblivion as the hug machine went to work.