I began my incision at the top of the patient's ribcage and drew the scalpel downwards with practiced ease, bringing the blade to a halt halfway down his right leg. There wasn't anything wrong with that leg but I wanted to keep my options open. In surgery, there is no such thing as a hand that's too steady or an incision that's too large. 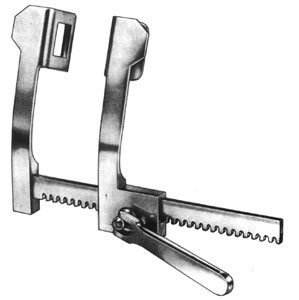 Once the incision was complete, Bianca nodded solemnly and handed over the rib spreaders, her eyes growing wide with horror. Everyone gets the heebie-jeebies the first time they come face to face with such an imposing tool moments before it cracks a human ribcage open. There's really nothing to worry about, however, as rib spreaders are precision instruments that have been designed with the sole intent of making the job as easy and uneventful as possible.

Gripping the handle with both hands, I brought the heavy end of the spreaders down on the patient's chest repeatedly until his ribs began to crunch and broke apart. Several dozen blows later, we were in business. After a few blasts of compressed air the chest cavity was wide open and mostly free of bone fragments.

"Can't tell what you're pointing at. Everything's packed tightly together in there."

With a sigh, I reached into the patient's chest and yanked on a bumpy organ-like object. At first it would not give, but by placing my left hand on the patient's head and my right foot on the table, I was able to pull it free. Several tube-like thingies that it had been attached to ripped and snapped. I held the prize up proudly.

"I don't know what that is," she grimaced, "but I'm pretty sure he needs it to live."

"If he did, the vital stats on his monitor would be beeping like crazy."

"Yes," I agreed, mentally updating my To Do list. "Very good. That was also part of the pop quiz."

I returned the organ to the general area which it had come from, trusting in the miraculous powers of the human body to mend what little I didn't understand. I found myself doing that quite often. Upon gently patting the organ for good luck, an ooze seeped forth from its holes which could only be described as Slimer's ectoplasm after a night of hard liquor and Taco Bell. That probably meant it was working, like a tingle in dandruff shampoo.

"Okay," I continued, "now to find the problem and fix it."

Everything in the torso looked okay at first glance. There was a heart, some intestines, an ingrown toenail, a couple of lungs and some kidneys. Then it dawned on me - the problem wasn't what was there, but what wasn't there.

"I'm going to need..." I surveyed the room, improvising as I had dozens of times before. "Yes, there we go. Please hand me that vase."

"Hold on," Bianca said flatly, stepping way out of line. "Are you going to put that vase into his chest?"

"Well I don't think it would make much sense to sew him back up and have him do it in his free time." 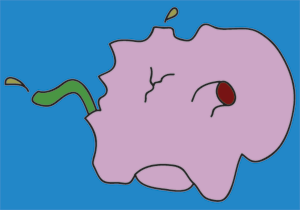 "Correction: I'm a medical geniusman." I squinted my eyes to drive the next point home. "And if you keep getting in my way, my incredible ideas will kill us all."

"You can't just take a vase off of a man's mantle and stick it in his chest."

"Of course not. We'll remove the flowers and dump the water out first."

Just then, a severe-looking woman entered the room, dropped a paper grocery bag at her feet and shrieked.

"What are you people doing to my husband?" She looked a little concerned. When she saw the numerous stains on the carpet surrounding the dining room table we were operating upon, she looked slightly more concerned.

"I am giving him life with my godlike skill and intellect. You called, we came. Did you change your mind or something?"

"You were supposed to fix my computer."

I turned toward an old eMachine in the corner of the room, then looked back into the open chest cavity before me, thoughtfully chewing my lip.

"No," I gently insisted, "I think you called me here for the surgery."

"No," she stubbornly replied, "I called you here for the computer."

"Impossible," I laughed, "I don't know the first thing about computers."

"Then why are you listed in the phone book as the Computer Doctor?"

"That's simply a colorful name, lady. You know, so I stand out from all the other doctors. You aren't supposed to take it so literally."

Seven minutes later Bianca and I approached the company van, a large and colorful caricature of our mascot PC the Friendly Computer giving us a thumbs up from his residence on the vehicle's dusty side panel. The argumentative woman had forced us to stitch her husband back up and leave, refusing to pay. God only knew how long that poor man would continue to live without the radical treatment he so desperately might have needed. At least she let us keep the vase.

I sat in the driver's seat and brought the key to the ignition, then paused. Something had been bothering me.

"Do you think I'm too brilliant?" I didn't wait for a reply. "This isn't the first time a call has gone so horribly wrong. Not by a longshot. I employ such fantastic and revolutionary methods but more often than not they scare everyone off. I'm beginning to think that I'm too ahead of my time."

Bianca opened her door and climbed in.

"Did you say something?"