Timeline of the Sun Chip Bag

The new Sun Chip bag is loud. Really loud. Everyone knows that, but few seem to realize the historic origin of the bag and the role it plays in the future. 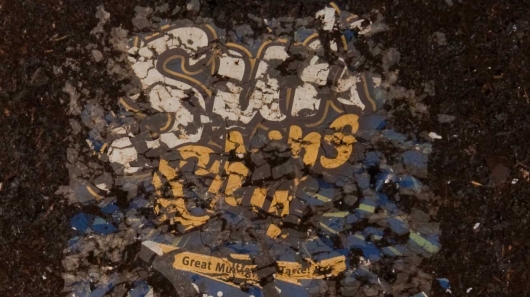 1850: At the height of the Irish potato famine, aristocrat Murray O'Sean attaches bells to his potato sacks to alert him if any starving peasants attempt to touch his enormous cache. The plan is so successful that O'Sean manages to retain his wealth and 300 pound figure despite the harsh conditions. Afterwards, people mimic him as a status symbol, and soon all belled potato sacks in Ireland are referred to as "O'Sean Sacks." The wealthier an individual, the louder and more elaborate the bells.

1910: The O'Sean Sack trend sweeps Europe. It is said that 70% of all potato packages had bells. One could not walk down the streets of Rome without hearing the cacophony of jingles. Pope Pius X gives his famous Potato Decree, excommunicating any person found with an O'Sean Sack within five hundred yards of St. Peter's Basilica.

1925: Due to the popularity of potato chips, O'Sean Sacks shrink to a portion of their original size, allowing for a more portable method for people to show their wealth. The bell system is often two or three times the size of the potato chip container.

1958: The plastic potato chip bag is invented. Though praised for elongating shelf life and increasing production, the new bags were a disappointment to the elite who preferred the ornately jeweled versions. Resentment and desire for a louder bag leads to unrest in the wealthy classes, often cited as a cause for the recession of 1958.

1966. Sean Chips Laboratory LLC opens in an undisclosed location somewhere in the Pacific Northwest. Backed by investments made by Hubert Humphrey, Charles De Gaulle, the Chicago Blackhawks, and a handful of Irish businessmen, the laboratory plans to create a disposable potato chip bag worthy of the O'Sean legacy.

1970: First confirmed death from the Sean Chips Laboratory. Possibly due to unregulated experiment. Following the incident, the laboratory is sanctioned by the U.S. government to continue tests without reporting results or accidents.

1988: For the first time in 18 years, Sean Chip releases a public announcement. Reports indicate large advancements in the noise department.

1991: Frito-Lays purchases top secret Sean Chips Laboratory and renames it Sun Chips. In a speech given after the acquisition, C.E.O. Donald Price promises to produce the loudest potato bag in history by the millennium. To finance research, Frito Lays sells a healthy alternative snack produced mostly of dust and hay, calling it a Sun Chip.

2001: Upon failing to produce the promised O'Sean 2, Donald Price commits seppuku in front of investors. Publicly, the mission is abandoned, but research continues behind closed doors.

2010 PRESENT DAY: The modern Sun Chip bag is released. The slightest touch while reaching for a chip results in over 90 decibels. O'Sean Sack historians call it an adequate nod to the original. To achieve such loud noises, the bag is worn out in a fraction of the time, resulting in the "compostable" feature. All parties are pleased, yet research continues. This lust for a better bag is cited in numerous accounts for the downfall of modern society.

2012: Romania adopts the most advanced Sun Chip bag as the official security system of the Palace of the Parliament. By encircling the building with empty bags, all potential intruders are immediately apprehended and subject to Romanian law (beheading). After 6 days all bags disintegrate, leading to lack of security and public uprising. Revolution sweeps the nation and all surrounding countries.

2023: While testing new bag technology, 15 Sun Chip scientists are killed. Frito-Lays states that the new bag (Sean 4.3) will be safe.

2024: The entire student body of Chicago's Healy Elementary School is exposed to high quantities of cheese powder and deafening sound levels during the release celebration of the Sean 4.3 bag. Despite the ruined ears, the event is heralded as a success.

2030: A bag of Peppercorn Ranch becomes the first Sun Chip to break the sound barrier. The U.S. Department of Defense takes notice.

2038: China, the United States, and Belgium meet at the Harvest Cheddar Summit to discuss the Sun Chip arms race. All nations agree that the world cannot be held hostage by bags of potato chips, but the discussions breakdown after two days with no treaty.

2045: After 54 years, Frito-Lays finally alters the chip. No longer tasting like barn, Sun Chips are purchased by actual consumers in mass. Not meant for domestic use, the influx of opened bags releases a shockwave that reverberates through the world ushering in the apocalypse.

2049: The last Sun Chip is eaten and humanity is vanquished.