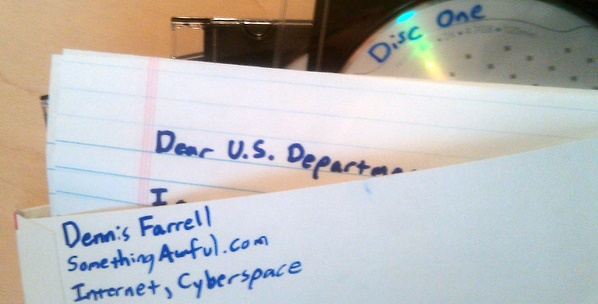 I am seeking employment. The majority of my experience comes from writing about video games for a comedy website since 2004, which to my understanding makes me qualified for a senior position in any career path within the United States and parts of outer space.

Please get on that for me as soon as possible.

In the unlikely case that my experience is insufficient, I have included a video showcasing my qualifications.

(0m - 23m) Eating an entire plate of spaghetti without letting any pasta or sauce touch my lips. NO trick photography, NO editing, NO computer graphics, A LITTLE BIT of blurriness when the drool dribbling down my chin causes the autofocus to freak out for a few seconds.

(24m - 31m) Using a metal bat to repeatedly thrash a suspended tire until my arms become too tired to continue.

(40m - 1h13m) Reading selected poems from my unpublished collection, "Too Brilliant For Publication", which has unfortunately been picked up by Random House since the recording of this video. Note that although my lips move, the words are inaudible. I'm aware that this is a problem and if hired I will be able to afford a specialist to teach me how to stop moving my lips.

(1h14m - End Of DVD) Running towards, then away from the camera, dropping to one knee after every circuit to catch my breath.

(0m - End Of DVD) Me, watching The Empire Strikes Back.

(33m - 35m) A montage of myself walking under a series of progressively smaller bridges without falling backwards or placing a hand on the ground for balance even once.

(36m - 58m) Taking seemingly random measurements of my head, then using the very same ruler to measure a cloth map of Azeroth and raising my arms in victory.

(59m - End Of DVD) Double-checking the above measurements. Visibly deflated, sobbing in a dark corner.

(0m - 43m) With my acoustic guitar, performing The Dark Side Of The Moon by Pink Floyd. I haven't actually listened to the album, so I'm pretty much just playing the main riff from Louie Louie and wailing the following lyrics:


(44m - 57m) Remember that mini-game in Street Fighter II where you kicked a car to smithereens? Here I am, at a local garage, receiving a brutal beating at the hands of a guy that sort of looks like Guile.

(58m - 1h23m) Attempting cartwheels. None of them land, but if you slow down the footage you might be able to make out that during one of the later attempts my feet actually go above my head.

(1h24m - End Of DVD) Bench pressing the Earth... or am I doing push-ups? Try to figure it out as I use space age video editing techniques to constantly spin the picture. If someone can tell me if my camera's warranty covers damage from clothes dryers, I'd appreciate it.

(0m - 20m) Using logic and reason and nearly one thousand words to shoot down a forum poster's claim that BioShock: Infinite won't be anything like BioShock and BioShock 2.

(21m - 37m) Shout outs and credits sequence, written in elvish, read aloud in Wookiee while dressed as (and adopting the mannerisms of) a Vulcan.

I strongly recommend that viewers of this application video take a substantial break between each disc. It can be quite an emotional experience along the lines of Schindler's List or Avatar.

Feel free to get back to me with the thirty highest-paying job offers and toss the rest.

Thanks for your time,