Think Smarter, Not... Whatever That Other Way Is

I was talking to my uncle the other day and he kept telling me that nobody in this country is thinking anymore, which got me thinking, because thinking is very important. It's one of those things you have to do all the time or you die, like eating or avoiding staring at your uncle's lazy eye. Dead people don't think because they can't-- that's why they're dead. Not everybody is dead however, and this article is intended to help alive folks learn a little more about that delicate thing inside their skulls that's ticking away day and night, being the only thing keeping them from joining Satan's minions forever in Hell. Welcome to the World of Thought! 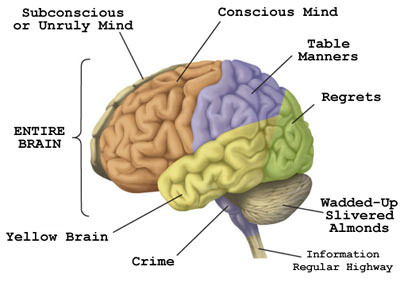 Copyright (probably) Some Clown in Europeland. CORRECTED BY ME.

The mind is divided into two main parts, the left side is the conscious mind and the right side is the subconscious mind. The conscious mind is the friendly person you hear talking when you're thinking about things. For example, when your mind says, 'I shouldn't have put that money on the Mariners,' that is an example of a conscious thought. The subconscious mind dwells deep within your brain, down near the middle where it's hard to hear what it's saying. Down there also happens to be where your innermost and generally least appropriate thoughts live. Each of these two brains have their own talents and weaknesses, and you should know the right times to consult each.

The two main brains are also divided into many sub-brains that contain everything including: your wants, needs, dreams, desires, sports trivia, recipes, memories of grandma getting drunk at a picnic when you were six, plans to fake your own death "just in case", favorite Babylon-5 quotes, songs that deal with fire safety, a continually-updated list of topical jokes you could tell should you ever happen to meet Jessica Alba, a datebook, emergency phone numbers, and a seemingly tacked-on calculator application that's pretty impractical to use. To get an idea at how the brain is divvied up, I included a brain map that I stole from some website. I think it was some Italian page because I have no idea what a "medulla oblongata" is and I had to fix it.

To illustrate how the nice brain and the nasty brain each work, here is a real world example of what might go on inside a human head during a particularly interesting situation:

You are Mr. Cashflow, a wealthy banker in town. It's a lovely spring day and you're out in your finest suit and top hat enjoying the sights. Out on the avenue you bump into your good friend, Mr. Goodfriend, and his new ladyfriend, Ms. Lovelylady. As you two are being introduced, she puts her hand out for you to shake.

The Conscious Mind:Wants you to become good friends. It decides the best course of action would be to shake her hand and smile politely.

Aftermath: The two of you become friends and get to know each other on a first name basis.

The Subconscious Mind:Wants to get it on and compels you to hump her outstretched hand and arm.

Aftermath: Mr. Goodfriend hits you in the mouth and the two of them leave. He also never returns the lawn edger he was borrowing from you because he hates you now, and you want him to know you're sorry so you reference the event on a fairly popular Internet website in hopes that he reads it and knows you really didn't mean anything by it and will never do it again.

Oh, it's true. There are some gross misconceptions about the brain still perpetuated in schools and books even today. Let's address some of them.

MYTH: Naming your son Brian will make him smarter because it's all the same letters as "brain" and in almost in the same order. Every time he writes his name the brain will think it's being cheered on and gain confidence.

TRUTH: Brian will know the difference between his name and the word "brain." If anything, Brian's brain will purposely get dumber to spite you.

MYTH: Your head sweat comes from the brain. You should try to save the sweat from your head and it drink back down so your brain doesn't run out of liquid to slosh around in. If the top part dries out you run the risk of losing the power to love.

TRUTH: The brain makes its own juice. You do not need to drink your sweat.

MYTH: Scientists have discovered that the type of skeletons which chase people do, in fact, have brains.

TRUTH: Skeletons are far too scary to be studied. 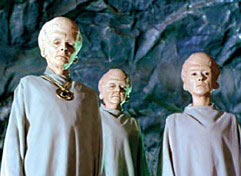 "You've heard of the seedless watermelon? Yeah, that was us."The very best part of owning a brain is having your own ideas. I figured this out for myself when I hurt my back and crashed on the couch a few months ago. Zardoz came on and I couldn't reach the remote so I had to entertain myself using nothing but the power of my mind until the painkillers kicked in. I've found that when cooking up an idea in your skull cauldron, instead of just processing and interacting with what's going on around you, your brain becomes the star. It makes up its own rules... then breaks them! The only exception to the rule about making and breaking rules is you can't break those rules, and there's no exception to this exception. (Unless you're some kind of theoretical physicist or a philosophy major but those guys are looney tunes anyway.) The normal procedure for making ideas is as follows: Think of something you want, need, or just sounds good, then think of ways to make it better, then think about it again to make sure your new idea wouldn't injure or kill anyone. As an example, I'd like to present a few...

Someone should make grilles for the fronts of cars that look like those huge old 1980's boomboxes and make it so they play music and everything.

The world is ready for a techno remix of C.W. McCall's "Convoy."

It would be fun to drive around in a car with a boombox for a grille blasting said remix.

The next Star Trek movie should have the crew go back in time and save the world with help from the cast of Home Improvement. The last line could be Captain Picard saying, "All right everybody, let's go home. Augh augh augh-- I mean, engage." as he smiles wryly.
UPDATE: I have been informed that this one is actually a bad idea.

There you have it! That's pretty much what's going on less than 3 inches from under your nose! Armed with this fascinating knowledge, you are now ready to delve deep into that sludgy chasm you call a head and be the master of every situation, or pull out the next world-changing idea! But be warned, because with tons of brain power comes a whole lot of responsibility. I think Uncle Ben from Spider-Man said it best when he said, "Aaaahhhhhhhh, I'm dying! No!!!" because his brain had stopped working at that point. Uncle Ben is dead, you're not, so get out there and think!