Bruce Banner (smirking): All these super-powered villains... all these world-ending crises... what is this, some kind of movie!?
Nick Fury (smirking): Nice Lampshade Hanging, my friend Bruce.
-The Avengers: Age of Ultron

The Marvel Cinematic Universe (or MCU) is a Trope Overdosed Crossover Frenzy series of Lighter But Edgier superhero films, Neo-Noir Psychobabble TV shows, and Definition Of Insanity New Media series based on Marvel Comics with Over 9000 characters. Started with the first Iron Man film in 2008, the MCU has grown to encompass films such as Thor, Guardians Of The Galaxy, and Ant-Man, TV shows such as Agents Of S.H.I.E.L.D and Agent Carter, and New Media series such as Daredevil. 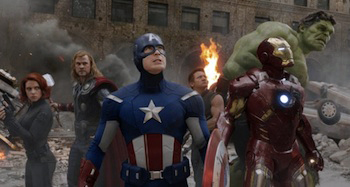 Oh, and fair warning... do NOT hate on the MCU around these parts ... mmmm-kay?

The Marvel Cinematic Universe is the Trope Namer for:

The Marvel Cinematic Universe provides examples of the following tropes:

Loki: "Thor, you and I are both Gods from the ancient Norse Mythology of earth. You are known for being in charge of lightning and I am a tricky jokester God"

*Excuse me, but This Troper believes that Brett made his first appearance in the first Thor, you cretin. You fucking idiot. Jesus. Oh, and "become" has one "b" in it ... maybe try learning to spell before not knowing about movies next time.

Real Life Example: after seeing Guardians Of The Galaxy my mom told me to take a bath and I said "Yeah mom I'd love to take a bath ... but unfortunately hell hasn't frozen over yet" a kick-ass line worthy of Guardian himself


After the end credits of Thor, an extra scene is shown in which a sleeping Thor suddenly opens his eyes wide, sits sharply upright, and frowns slightly, as if to say "what a crazy nightmare." Or Was It? The camera zooms in on Thor's Trusty Hammer. Maybe it wasn't a dream after all Thor...

After the end credits of Iron Man, a scene is shown in which Nick Fury congratulates Iron Man on saving the world or whatever, upon which Tony Stark walks up and says "Hey, and that goes double for me!" Nick Fury is confused - how can this be? Iron Man removes his suit's helmet. Nick Fury gasps. The camera pulls back, revealing the smirking inhabitant of the Iron Man suit to be Joss Whedon, foreshadowing his starring role in The Avengers. Smash To Black.

After the end credits of Ant-Man, the camera pans out to reveal that Marvel's Doctor Strange was standing slightly out-of-frame for the entire movie.