The swirling cacophony of electronic beeps and boops. A crowd of bleary-eyed teenage boys. Musky smells lingering in the stale air. Is this scene the bridge of a catholic priest's spaceship in the distant future? A future so distant that jokes about pedophiliac priests are so old that they are actually funny again, albeit in an ironic way that makes all the trendy hipsters feel compelled to run out and buy tight-fitting retro shirts which display these jokes? No, you cynical jerk. It's an arcade, and it's one of my favorite places in the world. Or at least it used to be. 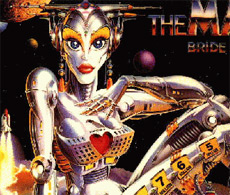 Bride of Pinbot, the most embarassingly sexual pinball game a 13-year old boy can play in public (aside from Jurassic Park).

The local arcade was where I spent nearly every weekend of my formative years, mesmerized by all the games and vaguely afraid of being beat up. Not that there was ever any real danger, I was just a nervous kid and thought that a beating might have been waiting for me everywhere I went back then. Eventually I grew out of that childish phase, and now I rest easy in the comfort that comes with knowing that I am definitely going to be pummelled at any moment. Regardless, as a newly-turned teenager in the early 90's, I managed to begin visiting the arcade at a very interesting and exciting time. Capcom had just kicked off the fighting game craze, and the power and the glory that is Neo Geo had handed Samurai Shodown and King of the Monsters down from the heavens. With tons of exciting new games on the way, classics such as Pac Man and pinball machines still accounted for a majority of the games to be found. It was pure bliss. This is where my love of video gaming began, and where I learned the truly important lessons about life that you can't get in school. I learned that ghosts HATE it when mortals eat so they devote every moment in the afterlife to interrupting meals, that a fight is never truly over until you've pulled the spinal cord out of your enemy's body, and that the best way to make a robotic woman moan in ecstasy is to slap her in the breasts with a pinball.

There were certain people that you were bound to run into every time you went to the arcade. There was the menacing guy who camped the Player 1 slot of the Street Fighter 2 machine and talked smack to everyone, but who wasn't all that great so he slammed the joystick or punched the monitor when he lost. My friends and I called him Big Fat Chet because he was big and fat and named Chet, and because we were out of earshot. Then there was the weird kid who never actually played, but stood in front of random games holding the controls and pushing buttons. Sometimes he would sneak up while you were playing and stand exactly three millimeters directly behind you, hoping to induce a state of osmosis in which he could play the game through your body. Last but not least was the older guy that chainsmoked while he played Centipede. He kept an ashtray full of quarters next to an ashtray full of ashes, and left a brownish yellow film on the top half of the screen that only came off if you licked it really hard.

As my interests turned to more important things like comic books and masturbation, I began to visit the arcade less often. Besides, after I got a Super Nintendo I could play games right in my own house and pause them so I could get a perfect look at Chun-Li's underpants. Unfortunately, as home consoles became more powerful and popular, there were less reasons for people like me to go to the arcade. So how had the arcade industry weathered this storm, and how could they hope to attract gamers after the tremendous success of home consoles? I took a trip to an arcade for the first time in six years to find out.

The first thing I noticed was that Capcom had stuck to their guns this entire time, and were still pumping out fighting games. Their current lineup is composed of:

Capcom Versus Marvel (Marvel Versus Capcom for left-handed players)

The A-Team Versus Ghandi 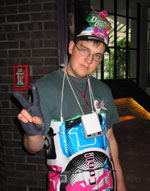 This guy loves DDR. Doesn't that make you want to as well? Kill yourself, I mean.

Unfortunately, these games turned out to be my only connection to the arcade as I had once known it. There were no pinball tables, and the few classic games to be found were pushed into a corner and unplugged. So what else was there to play? Sheer terror, in the form of Dance Dance Revolution and the countless gimmick games it had inspired. If you're not familiar with DDR, it's basically Track and Field for the NES but with lower quality music. There is a large pad with buttons for you to "dance" on while trying to keep in time with the music. This is an act that (depending on your skill level) either makes you look like Frankenstein trying not to step in lava, or someone that takes dancing way too seriously and hopes other people are impressed.

Part of what draws people into a game like DDR is the unique way in which you interact with the game. By focusing on a gimmicky controller, game makers hope to catch your attention more effectively than they could using an ordinary game cabinet with a joystick and buttons. There are now games in which you have to slap bongos, rub babies, punch dairy products, and wiggle your eyebrows suggestively at seemingly harmless hedges.

To be honest, standing in the arcade by myself and being surrounded by all these games with ridiculously elaborate controllers had me feeling out of place and slightly angry. I missed the way things used to be, but perhaps I was being narrow minded. After all, I was one of the people who stopped coming to the arcades, and was therefore part of the reason they had to resort to gimmicks in the first place. Instead of being a curmudgeon that couldn't let go of the past, I decided to give the new arcade experience a try. After wandering around confusedly for a bit, I finally settled on a machine that looked promising. For four grueling minutes I tried my best to score just one combo. I danced my hardest and flailed my arms as wildly as I could, but it was all to no avail. That was when I realized I was in the men's bathroom standing at a urinal. I was pretty ashamed, but not as much as I was when the Japanese kid next to me got a better score.