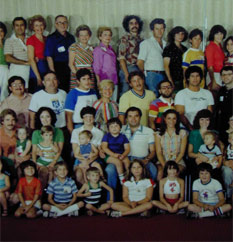 Welcome to Internet!I'm not quite old enough to have been at the starting point of the Internet culture. I remember downloading pictures of Cindy Crawford from AOL at 2400 baud and calling into my local BBS to kill Barak's Crazy Mother on "Legend of the Red Dragon". I never actually placed a telephone on top of a modem or exchanged plain text emails on a government supercomputer. There were pioneers of the Internet stretching into the past well before that, but one thing these pioneers and I share is that the culture of the Internet of the time was basically homogenous.

The Internet of 2004 is no longer so small and homogenous. It constitutes dozens of various archetypes and hundreds of millions of individual users. I don't have the time nor the willpower to go into every group and subgroup of Internet users, but I will provide you with my keen insight into three categories. Take heart, I'm probably not making fun of your specifically, I'm just making fun of you in general.

Internet Males have very discriminating tastes when it comes to entertainment, and they will discuss their interests to the point of obsession. Every Internet Male possesses at least three of the following qualities:

Intense love for Tool or Radiohead. One must be heavily favored over the other, they cannot like both or neither of them.

A preference for the fan group doing translations on bootlegs of their favorite anime TV series. One of the easiest ways to spot an Internet Male is if they say something like "oh, AFF did the subs, well this isn't worth the download. I'll wait for [KJE] to put their version out."

Impossibly rigorous standards for what makes a woman attractive. Despite the fact that (or probably because) Internet Male is a virgin he will immediately spot or fabricate physical flaws in the most gorgeous woman.

An innate disgust for anything on the Internet that he has seen before. When a friend or family member shows him a link to a wacky video he will say "welcome to 1995".

There is a 25% chance that Internet Male has a membership on the Something Awful Forums and a 75% chance that he has an account registered at Slashdot.

Purchases video cards and other computer hardware based on benchmarks provided by the manufacturer. Probably has a signature on any forums he posts at that contain his complete and up-to-date system specs.

Has considered doing a PC case mod but usually just places empty Mountain Dew cans inside his computer when his entire desk space if filled.

Internet Males are an increasingly dwindling and embittered species on the Internet who hearken back fondly to the days before the Internet "sold out". They are the geeky undersexed equivalent of that guy you know who stops liking a band the instant one of their albums cracks the Billboard's Top 100.

It's not a widely known statistic, but 95% of the politically active people on the Internet claim to be "libertarians". These Cyber Libertarians have formed their political opinions by processing nothing but political attack pieces from both sides of the political spectrum. From their parent's basements they declare themselves libertarians because it's cool and different than being a democrat or a republican. They say they "want much smaller government", but when you ask them to expand you will quickly discover that no two libertarians share anything even approximating the same beliefs. Some want abortion and drugs banned, others want to grind up and smoke a partial birth while a hooker gives them a hand job.

It turns out the only thing that libertarians have in common is they all learned from mom and dad that money is awesome, and consequently their entire belief system is hinged around protecting their own money. Only libertarians could conceivably equate seat belt laws and sales tax to terrorism and fascism. Only libertarians will mention public kindergarten in the same sentence as Stalin. They believe that the ultimate, and most important, loss of freedom is the loss of ability to control one's own money. From my years of skulking around political forums on the Internet I have learned the following about the vast legion of Cyber Libertarians.

They think drugs should be legal.

Except for hard drugs.

All drugs should be legal.

Tax should be abolished.

Except for tax to support the military.

And local tax for the police and fire department.

No, the police and fire department should be privatized.

Forced integration is against the constitution.

My mom's house servant told me about it when she went to the store.

The Eternal Dipshit is my bread and butter. While they think they are simply posting about how they can actually go Super Saiyan on a Dragonball Z forum or using Paint Shop Pro to put super hero costumes on their cats, they're actually providing endless hours of unintentional entertainment. The Eternal Dipshit is the sort of person who logs onto the Internet and behaves like the biggest spastic moron possible. This may be how they act in real life or this may just be a case of the Internet making them stupid. Whatever the case is the Eternal Dipshit is, well, eternal. That 15 year old posting on Goku's Hideout is going to grow up and be the crazy guy who writes a 500,000 word single page website about how local politicians are in league with Satan. The 17 year old girl who creates a Geocities shrine for the actor who played Andrew on "Buffy the Vampire Slayer" is just practicing to dress her cats up like Aquaman when she hits 50.

The Eternal Dipshit exhibits several of the following traits:

Opens every email attachment with excitement, replies to messages from Nigerian widows, and gleefully inquires about the quality of v1@gr@.

Will give out personal information or credit card numbers over instant messaging clients.

Not afraid to post a lot of really bad poetry on the Internet.

Does not think there is anything suspicious about an ebay auction for a Sony 30-inch plasma TV with a "Buy It Now" price of 49.99.

Frequently updates a Livejournal or similar site into which the Eternal Dipshit pours their soul, including intimate details that would be better left to a medical textbook or an episode of Springer.

Writes fanfiction without a hint of irony or self-deprecation.

Votes in every poll on gamefaqs.com and has signed every Internet petition because they matter so much.

Thinks Bonzi Buddy is a hoot!

Is probably forwarding you a list of jokes from myhumorlaffo.com that are so old and unfunny they could be carbon dated to the cetaceous period's version of Jeff Foxworthy.

Has an uplifting religious poster or anime wall scroll within 18 inches of their computer.

The sad fact is that the Eternal Dipshit represents roughly half of the population on the Internet. What's even more pathetic is that this ratio is only worse in real life, leading to the creation of more and more Internet Males to become snobby and aloof from the sea of stupidity.

Welcome to the desert of the real as that guy from the Matrix would say back before the Matrix totally sold out.

Only You Can Prevent Phorest Phires

Guten tag, Livestock here with a brand new Photoshop Phriday. I mean this definitely isn't a rerun, because we've never done what we're doing this week. What are we doing? We're having fun with heroic do-gooder, Smokey the Bear. Smokey has saved countless lives, trees, and animals by encouraging people not to randomly set things on fire. With a noble goal like that, we just had to pay our respects.