The Untold News Stories of 2003

Far be it from me to criticize the media, as my journalistic integrity is slightly lower than a box of vanilla wafers with a misprint about fat content. As scandalous as a treacherous box of vanilla wafers may be, it pales in comparison to the mime makeup of deceit the media often wears while remaining silent on major stories. As a vigilant follower of world events, such as that time that guy shot a rocket at that one country, and that time that one country flew a spy plane over that other country, I keep a close eye on things. Whether they are deemed worthy enough to be immortalized in print, or whether they get swept under the rug like the clumps of a hobo prostitute's hair, I care not. It is simply my nature, much like it is my nature to sometimes affectionately refer to myself as a submarine commander, to look objectively at the world's events through a myriad of multicultural perspectives. What I'd like to do now, aside from throw up the Arby's I had for dinner, is share with you what I consider to be the top news items of 2003 ignored by the mainstream American press. I hope you find it as enlightening, eye opening, and scary as I do. 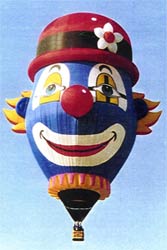 Soar, Clown Balloon! Rise above it all!Through government leaks largely ignored by the mainstream press, we learn of a horrific plot on the part of an al-Qaida cell to not only capture America's beloved clown balloon, a natural treasure, but to crash it into America's tallest roller coaster, the Top Thrill Dragster. Obviously this was meant to be a propagandistic attacked aimed at sending a message that Americans can never have fun again. The FBI became aware of this after a number of Saudi nationals tried to get hot air balloon pilot licenses. Subsequent raids turned up extensive photographs of the clown balloon and the roller coaster, as well as maps and bomb making equipment. Even though there is evidence suggesting this plan reaches all the way to bin Laden, the biggest threat to America that isn't American itself, the press completely glazed over this like a donut. Perhaps it was the notion that our beloved clown balloon might don a turban of terror that sent shivers down the invertebrate spine equivalent of the press. 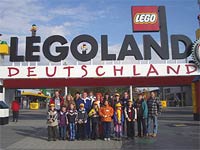 Proof that LEGOLAND aims to indoctrinate its followers at an early age.Tiny Luxembourg, which is comparable in size to a gigantic atom as large as Rhode Island, shocked the rest of the world when it boldly declared war on the only comparable global entity - LEGOLAND. According to the CIA World Fact Book, Luxembourg has an estimated 93,994 men fit for active military service. In the midst of this astounding development in global politics, American press remained silent. Why? Because of an abhorrent hole in our intelligence network so big it compares only to Anna Nicole Smith's gaping vagina. LEGOLAND has, since it's creation, existed outside of U.S. radar. Furthermore, there is evidence LEGOLAND might have already established multiple bases throughout the world. Upon checking the CIA World Fact Book, you will notice a complete dirge of information on LEGOLAND. Forget the war declared by Europe's appendix, our country is dangerously unprepared for terrorist attacks from LEGOLAND! Because of this massive gap in national security, we simply don't know what sort of threat LEGOLAND poses. For all we know it could be a rogue terrorist state, and hundreds of terrorists, including Osama bin Laden himself, might be hiding out there. While I am not privy to the internal developments of the CIA, I certainly hope they have made some effort to correct this screw up. If anything, I believe the CIA needs to begin dispatching undercover operatives to ensure that LEGOLAND is not harboring enemies of democracy. Following that, I recommend they gradually begin dispatching advisors to LEGOLAND to monitor their war with Luxembourg. 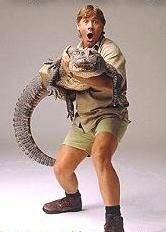 Oh my.In a desperate attempt to buy time in hopes of stalling, if not preventing, a U.S.-led attack on Iraq, the United Nations dispatched a special envoy to hunt for weapons of mass destruction. This envoy, consisting of Steve Irwin, renowned crocodile hunter, and a camera crew, tried in vain to locate any evidence that Saddam Hussein posed an actual threat to someone other than his own people. In spite of the fact Steve Irwin was unsuccessful in locating a smoking gun, he was successful in playfully wrestling many Iraqi officials to the ground. Because the United States had already made up its mind to go to war and weapons inspections ultimately served no purpose, the media made no mention of adorable Irwin's efforts. Instead they focused on the awesome majestic wonder of Donald Rumsfeld's intense eyes, as well as titanic arm span, which seemed as though it could swallow the world up in one great big unilateral hug. 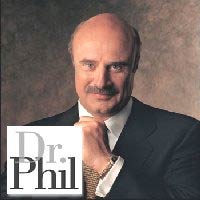 The elders of the tribe call him "The Soul Stealer" and warn not to go near his cave.Beloved inspirational terrorist Dr. Phil narrowly escaped with his life when federal agents stormed the studio where his television show is taped in a botched attempt to end a standoff that had been going for weeks. Though the cameras had long stopped filming, Dr. Phil and loyal followers held an entire studio audience captive, refusing to let them go. The intimidating Dr. Phil said he would not let a single person leave until two of his guests put their differences aside and agreed to share a "power hug." Although Dr. Phil boasted he had all the patience in the world, the ATF did not, and after 15 days of unsuccessful psychological operations that included blasting Christmas and Metallica music around the clock, they raided his studio igniting panic and disarray, inadvertently causing the deaths of 57 people. Attorney General John Ashcroft used his substantial power and reach to sweep the story under the rug, in an effort to avoid the same controversy Janet Reno suffered after the end of the Branch Davidian standoff in Waco, as well as after she posed nude for Hustler.

Why did the media really neglect to report any of these events? Is it because they lack the testicular audacity to tackle the hard issues? Or, is it something more sinister, such as a deep-rooted attempt to conceal stories too dangerous for the American public to know? Logically, it's none of those things. I made them all up. April Fool's Day has come early, hamheads! What you gonna do? Huh? What you gonna do? Ohhh, I'm real scared! You big bunch of babies.