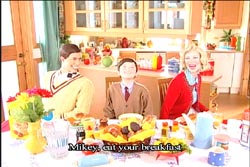 Since no good movies were released in 2003, this article will be accompanied by images from the Japanese TV show "OH! Mikey".Having just quit smoking for the New Year, I am filled with a simmering rage that threatens to boil over at the least provocation. The only thing competing with my repressed craving to bathe my lungs in the tingling delights of nicotine is the desire to crack open skulls and bathe my soft skin in the red work of a hard day. Instead of going on a murderous rampage I have decided to channel my withdrawal induced vitriol towards something a little bit more productive.

MSNBC recently announced what they considered to be their ten favorite films of 2003. I can hardly even think of a movie I liked in the past twenty years, so needless to say I was more than a little disappointed with their anemic list. Let's take a stroll down recent memory lane and I can debunk the films that MSNBC erroneously declared to be good.

"American Splendor" - MSNBC reviewer John Hartl referred to "American Splendor" as "the year's most original film" and praised its unique blend of documentary footage with actors. The chances of me seeing this movie are about the same as the chances that I will abruptly learn how to teleport myself at will and use this newfound power to deliver donor organs to people awaiting transplantation. The title of the film alone is enough to make me want to picket outside of theaters showing it with signs I stole from the hippies I beat up at an anti-war protest. No blood for "American Splendor"! 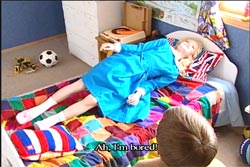 "Ah, I'm bored!""Capturing the Friedmans" - Way to go MSNBC, you picked another documentary for the list; it must have been a real stellar year at the movies! According to the article this movie asks the question "Was dad just a normal man with a habit of recording his family's progress through home movies, or was he a pederast who used his sons as accomplices in numerous crimes against children?" I'm no pederast, but the idea that this movie made MSNBC's best of 2003 list makes me want to commit numerous crimes against children. I went into this movie expecting another hilarious holocaust documentary, instead I got a bunch of non-zyklon related home movies that imply pedophilia. The only question I was asking was "What Would Hitler Do?" In fact I made a bracelet with "WWHD?" on it so that whenever I had a dilemma I could just contemplate what Hitler would do if he were in my position. You'd be pretty surprised how often Hitler would "eat more cake and then masturbate".

"Cold Mountain" - The main characters in this civil war drama are foreigners playing southerners. I know the Deep South is a shit hole worthy of nothing but contempt and possibly napalm, but even Johnny Reb deserves to be portrayed by an actor who can whistle Dixie. Like most of the films on MSNBC's list there is no way I'm going to see this movie so I have to wonder if Jude Law used a British accent like he did when he was playing a Russian in the hideous "Enemy at the Gates". 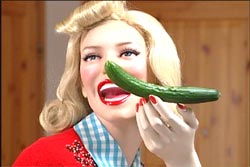 PICKLES"Lilya 4-ever" - I'm guessing that the script for this movie is nothing but an edited IRC log with some stage direction added by a channel op. I hate movies almost as much as I hate IRC so you can bet this is a winning combination in the "piss off Zack" school of film. MSNBC says the movie has something to do with a teenage girl being sold into prostitution. While teenage prostitution is right up my alley, I have a sinking suspicion that this film is not an impassioned plea to legalize it in the United States.

"Lord of the Rings: Return of the King" - The only thing worse than Tolkien's books are the trilogy of ponderous and dull movies based on them. How Peter Jackson managed to get the financing to shoot all three movies back to back is a mystery not even science can solve. About the only good thing I can think to say about the movies is that at least Jackson had the sense to cut a lot of shitty characters like Tom Bombadil out that would have otherwise added agonizing minutes to each movie's already ghastly 50 hour running time.

"Lost in Translation" - Come on, it's not really that hard to translate "sucks" from Japanese to English. Initially I thought this movie looked pretty good, but then a bunch of people on the SA forums started raving about it and whenever that happens it's a pretty safe bet that the movie will suck.

"A Mighty Wind" - Dear Christopher Guest, stop trying to remake "Spinal Tap" and, if you absolutely have to, at least start hiring some new fucking people. You've got basically the same goddamn cast in every one of your movies and believe me, adding Parker Posey to the mix a couple movies back did nothing to improve the situation. It's worth noting that I did actually see this movie as opposed to almost everything else on MSNBC's terrible list. Fred Willard's multi-faceted and deep portrayal of a failed sitcom star almost brings some gravity to the film, but in the end even the incomparable Willard can't salvage things. 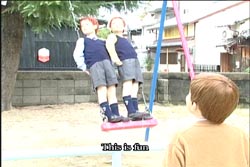 "This is fun""Mystic River" - Following on the heels of such festering abortions of cinema as "Blood Work" and the geriatric "Space Cowboys", Clint Eastwood brings us a movie starring Sean Penn that's about as entertaining as math story problems. "Mystic River" is a dizzyingly dull "American drama" about murder and family, two things that she be mentioned only in passing in films. In my opinion the best movies ever made have been about either alien attacks on earth or lots of pratfalls. If Clint Eastwood could dress Sean Penn up in an ET costume and push him off a bridge then we could talk about including his shitty little movie on a "best of" list.

"Spellbound" - What happened MSNBC? Was cramming the shitty bird documentary and the shitty spelling bee documentary onto the same list going to make you feel too guilty? If you have to dredge up shit like this for your top ten list maybe you should consider not even making one for the year.

Not everything is bad news at the movies. The sequel to "The Fast and the Furious" somehow managed to outdo the original and we can look forward to the stunning "Torque" in early 2004 to help us forget about the nightmare that was 2003.

You must be this tall to read Photoshop Phriday

Poof! That was the sound of me, Livestock, appearing out of nowhere. I'm pretty excited because it just so happens the first Photoshop Phriday of 2004 is also the 100th eidtion. Or 101st if you count the "Rejected Muppet Movies" Phriday that had to be removed when Jim Henson's lawyers threatened to have our families murdered. Or 99th if you don't count that one or the "Ask the Goons" Phriday that we also had to kind of sort of remove due to legal threats. Such controversy! We just want to have fun.

This week the delightful goons of our Awful Forums have conquered the world of amusement parks, making this Phriday extra thrilling. We've got roller coasters of death, water slides of misery, bumper cars of terror, and all the amusement park madness you can handle! Get in line now, because everyone will want to ride Photoshop Phriday.