We Must Vote For Floor Zombie 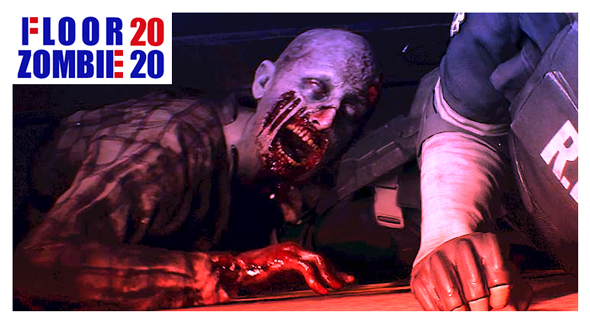 As you are all well aware, Raccoon City's current Governor, the hulking 500 pound flesh beast known as Nemesis, has been burning this city's economy to the ground. Literally. With that oversized flamethrower he carries around. As such, in this upcoming election, it's of the utmost importance we fully support our chosen candidate to ensure we bring Nemesis' fiery reign to an end. And that candidate is Floor Zombie.
Unlike his radical opponent Gov. Nemesis, who stalks his prey relentlessly; Floor Zombie's bloodthirst is reigned in by his distinct lack of mobility, caused by an absence of working legs which were shot off while he was pursuing his last victim. Additionally, while Gov. Nemesis can equip any manner of military weaponry, extend sharp tentacles from his forearm, and crush human skulls in his fist, Floor Zombie has only his restricted reach and a partial mouthful of rotten teeth to utilize.
Floor Zombie's unique ankle-biting platform is thus perfectly suited to the many frightened citizens of Raccoon City! With his violent lunges being much easier to bypass with a simple side step or a quick knifing to the back, Floor Zombie offers a relatively safer life for most. We're confident that the voting populace will resonate with these progressive values, but only with your help can we push Gov. Nemesis out of office and out of our safe bunkers once and for all! 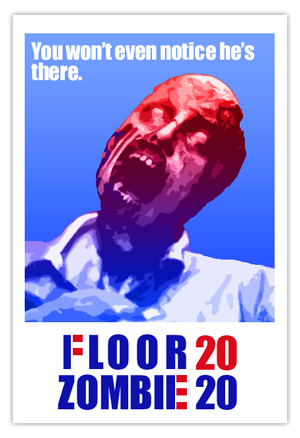 We know that a lot of you younger folks were hoping to nominate local police officer and living person Jill Valentine for this election, but the extreme radical nature of Valentine's positions to "end the zombie plague" and "shoot the zombies so we don't have zombies" are far too extreme for the Democratic party's sensibilities. This kind of pie-in-the-sky thinking might sound appealing on the surface, but is ultimately unrealistic. I mean, who's going to pay for all this zombie killing? We insist you turn your enthusiasm for Valentine's campaign into a newfound enthusiasm for Floor Zombie, who shares similar but more realistic positions, such as "fewer zombie bites" and "only the weak will perish."
It's not a time we can afford to be divided, here. We all know we just want a return to a time before Gov. Nemesis took office. A simpler time where our blood-splattered streets were only populated by screaming civilians and shambling cannibalistic corpses, and maybe the occasional mutant crocodile. A time where, so long as you had your neck-guard and your cardio, you could live to see another day in your shelter. Gov. Nemesis and his ever-changing arsenal has taken our lives and wrecked them beyond recognition. Floor Zombie is here to bring Raccoon City back to the status quo we all crave.
Lastly, last election's voter turnout was abysmal, which is one of the reasons we find ourselves in this situation in the first place. It's all hands on deck here, so we don't want to hear any excuses this time! No more "Oh I don't know how I feel about voting for a throat-lunging mindless husk" or "That thing killed my grandmother and it can burn in hell before it gets my vote." This is a political revolution we're trying to start here! There's no room for dissenters or second-guessers! Floor Zombie, regardless of how many of your family members' intestines he may have eaten open-buffet style, is our best chance at winning this election, so be sure to show up this time!
Floor Zombie is the kind of candidate everyone can get behind. To help you spread the word as we approach election day, we're providing these sharable campaign images! We're all counting on you to help us achieve victory! Remember Floor Zombie's slogan, "Stability Through Inability." 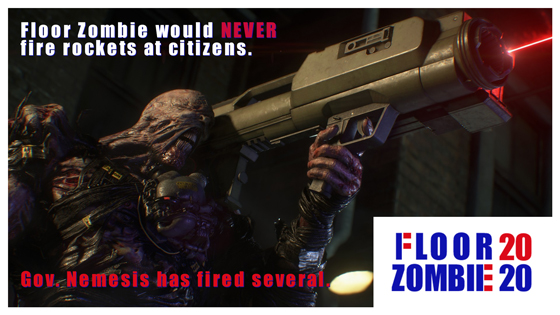 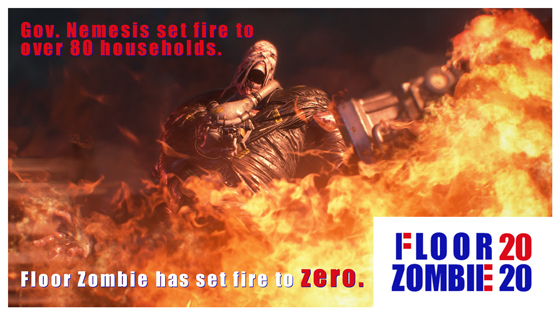 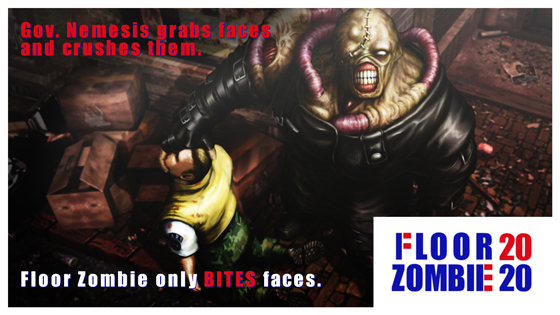