The Demise of Guys: From Our Gross, Sticky Hands

"Boys' brains are being digitally rewired for change, novelty, excitement and constant arousal." Sounds like regular boys' brains with "digitally" added to be scary.

Men have been gross bros at least since the existence of the high five. Tijuana Bibles featuring Mickey Mouse sucking off a donkey were being passed around almost a hundred years ago. You think Sinatra wasn't pulling tops down on cocktail waitresses to make Dean Martin laugh? Men are much less "cool" than they used to be, but the blame for that one rests with corn syrup and Ed Hardy, not Max Hardcore.

As for the video game nonsense, I discount Zimbardo's point completely. The first wave of hysteria over violent video games warping children's minds wasn't Mortal Kombat or Doom, it was 1976's Death Race. It had its own special report on 60 Minutes and concerned parents and was even condemned by the government.

Violence comes from mental problems, peer pressure, and past abuse, not from playing video games. No equivocating. If someone, even the perpetrator, tries to blame a murder spree on a video game, they are full of shit. Movies don't make people murder other people. Music doesn't do it. Books don't do it. Nope, atheists, not even those books. 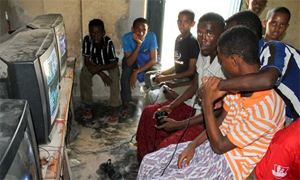 In Somalia, when al-Shabaab pulled out of Mogadishu, their laws banning video games went with them. The kids, who would normally be recruited by al-Shabaab to join their militias and become killers and suicide bombers, instead got together and played video games. Let me repeat that: they could have a real gun and go kill people or play video games and turns out most kids are not psychopaths who want to murder people.

Even if you buy into Zimbardo's basic premise, singling out men for his diagnosis is shortsighted. The Internet, and all the perceived ills it brings with it, is no longer a domain for men only. Women can fall victim to all the same vices as men. If I'm wrong about that, Zimbardo might want to let all those women who play video games know that their vaginas make it so they can't be brainwashed by evil Grand Theft Auto hypno waves.

Zimbardo touches on real problems of isolation in the digital age. His easily-consumed premise is all wrong. Everything is changing, every model of our society, and Zimbardo might as well be pointing to the death of the travel agent industry or any other facet of our lives altered by technology.

You can read more from Zack in today's SF Signal article, "Book, With Occasional Music," in which he interviews sci-fi authors about something really important: the music they listen to while writing. Oh, and he wrote a book himself. Buy Liminal States instead of Zimbardo's book.