A Comprehensive Guide to Lame Sports 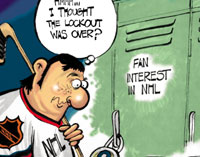 Hockey sucks because it's all about drunken rednecks staggering around a freezing cold room and beating each other with sticks. Think that's a sport? Think again, buddy. It's an Alaskan childhood. If I wanted to watch a bunch of oil-drilling ice jawas brawl over a tin of Skoal for hours on end I'd head up north and tell people chewing made their women look even more like cattle. I don't give a fuck what Super Smash Brothers says, ain't nobody climbing ice up there unless there's a jar of
pickled eggs and a stack of unemployment paperwork at the top.

Hockey also sucks because most people who play it are French Canadian. You know how how to get a locker room full of those guys pumped before a game? Hang a banner saying "IF YOU LOSE, YOU WILL HAVE TO SHAVE." While I certainly hate to marginalize a society whose greatest cultural export is Celine Dion, sometimes you have to wake up and smell the coffee. Or, in this case, the garlic-meets-spoiled-milk stink that wafts over Michigan every time a southerly wind blows. Those things that run over the ice in between periods aren't mobile freezers. They're gigantic Glade Plug-Ins.

Of course, ethnicity and body odor can't do much to harm a sport that's already the boringest goddamn thing in the universe. Hockey fans are prone to rioting after particularly "exciting" games. I can only imagine the terror they would cause if they visited a fabric store. Give a hockey fan a lighter and a tape of ABC Family programming and he'll burn down an entire city block before someone finds a pork rind big enough to distract him.

I might be going a little too harsh, though. The NHL recently tweaked its offensive rules, allowing for high-octane barn-burners that end with with exciting scores like "three to nothing" or sometimes "four to two." The only thing that reaches double digits in a hockey game is blood alcohol content. Even that's nothing to cheer about, since you could drink a hockey fan into a coma and he'd still talk sports in his sleep. When something like this happens you hear the phrase "defensive game" thrown around. "Defensive game" is French Canadian for "Americans like offense, so I think it's trash." For the record, there are a lot of people who hate scoring and would rather spend their time badmouthing America. You can find them here. 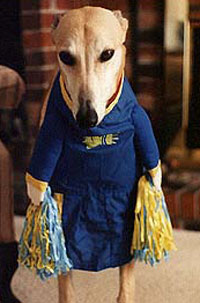 The hardest part of cheerleading is explaining to your husband why your new son is coffee-colored. That's it. I don't care what her No-Fear T-shirt has to say on the subject, the cheerleader has two jobs: bouncing her titties around and serving as part of a warm seafood buffet for the rest of the team. Unfortunately, God installed cheerleaders with a strong sense of entitlement in place of any real talent, and now they're confused about which lips they should be flapping.

Cheerleaders seem to have mixed feelings on their job. On one hand, they're proud to do something men can't, which is a lot like men gloating about being able to make important decisions without consulting Cosomopolitan. On the other, they don't like being subjugated. They want respect. They don't dress up in cowboy hats and smack their coworkers on the ass with a whip so a bunch of men, with their gross hairy penises, can stare at them. They don't need to get a degree to know they've accomplished something. Cheerleaders go to the school of hard knocks, where they major in gluing their tits to the insides of their shirts so they don't pop out. Not that it would matter if they did, because they're proud of their bodies. But don't look anyway. It's degrading.

While cheerleaders are confused about their their jobs there is no doubt in their mind they are athletes. This is clearly not the case. The ability to run is a desirable quality in an athlete. So is physical strength. As far as I know the Saints didn't draft Reggie Bush because he could wiggle his fingers in time with Paula Abdul songs, and while I'm sure Adam Morrison spends lots of time at the bottom of large piles of men, I don't think it's because his cheer pyramid collapsed. Cheerleading is to real sports what fat girls are to gay dudes: a fun diversion in between trips to the shower with other guys.