The Cincinnati Reds (often referred to as “The Big Red Machine” or “oh, god damn it” by fans) made several moves in the last few weeks, hoping they could repair their ailing pitching staff. This is with good reason: the relieving crew couldn’t throw a strikeout if the team they were facing was some gimmick club called “The Blind Lawn Care Advisors” and had a bunch of milky-eyed dudes taking shots at the ball with rakes and garden hoses. Every time some goofball in a crimson uniform takes the mound you can hear the collective asshole of Ohio squeeze shut like a rusted airlock.

Since they didn’t want the MLB to replace the phrase “the Reds’ bullpen” with the braying, taunting sound of a mule’s laughter – hearing an announcer say "The Reds are making a call to the ah-huurrrrrr" every game would be funny, but damaging to morale – the club picked up a number of new pitchers before the deadline. This, they thought, would take pressure off the starting crew. As many of you know, Aaron Harang doesn’t pitch well unless they hold a mirror behind home plate and shout “Frankenstein is coming” when he starts to lose focus, and Bronson Arroyo’s mound strategy of “looking like a pouty teenage girl” hasn’t worked since Jose Canseco tried to finger his asshole in a gas station parking lot. That isn’t even mentioning the remainder of the Reds’ starting rotation – Elizardo Ramirez, not to mention Eric Milton and his sassy goatee, are proof positive someone needs to sink Ohio into the ocean so Kentuckians will have a place to take a bath. 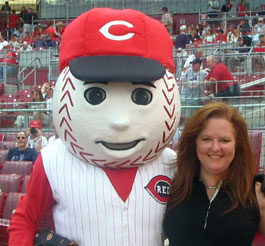 The Reds' mascot: Terrifying children and enticing fat women since 1869. Here is where the Reds failed, however: they assumed more pitching equals good pitching. I hate to argue owner’s philosophy with a team that traded an all-star first baseman away for a song (a song that gave up eight runs a game until the they paid another team to take him off their hands) but maybe, just possibly, when your new prospect’s arm is every bit as powerful as a broken crank on a jack-in-the-box, you should start putting steroids in team lunches and pray nobody notices his penis has turned into a Tic-Tac hanging above two half-eaten blueberries. In the hours before the deadline the Reds picked through the garbage of two other teams and came through with a couple of new pitchers, neither of whom belong on a baseball field unless they’re pushing a lawn mower:

Those weren’t the only moves the Reds made, however. In the weeks leading up to the deadline they shopped off promising hitters Austin Kearns and Felipe Lopez for a bunch of mid-level relievers, a closer, and Shortstop Royce Clayton. Trading real talent for “potentially” “great” “pitchers” is no new thing for the Reds. The problem is that they have a reverse Midas touch when it comes to young guns. They’ve ruined more promising youngsters than Auschwitz did bankers and overbearing grandmothers combined. Unfortunately, the trade left the team with a total of two “power hitters”:

Given the Reds’ past few seasons I don’t think anyone’s expecting them to keep the new pitchers past the next trade deadline. Just as surely they’ll get next to nothing out of the deals they make (maybe a Buick that smells like the old woman who died in it, if they’re lucky) and the Cincinnati ownership cycle will begin anew. I can only hope the next sucker to buy them is as colorful as Marge Schott. I like the Reds a lot more when they’re talking about stepping on pieces of shit on the field, not paying them $20 million a year.

I know I’m not owner material. I don’t have the smarts or patience required to roll around nude in a big pile of money all day. That takes a special breed of man, a man who has trained for the job his whole life, possibly by rolling around nude in piles of Monopoly money and working his way up. I do have a few interesting thoughts when it comes to maintaining a professional club, though. For instance, when you want to trade an all-star caliber player you need to trade for someone of equal value, or at least another decent player and a draft pick.

When you’re running the Phillies, however, a whole new philosophy comes into play: your goal is to make friends with the Yankees. Your entire career consists of calling them and asking if they “wanna hang out sometime”, then giving them a bunch of stuff just to show them how cool you are. Every night you go to bed smiling at the thought of the Yankees ruffling your hair and telling you “good job, bro”, then inviting you to their secret clubhouse, where they have some beer and maybe a few skin mags or something. While you don’t want to admit it you think you might love the Yankees a little bit. Sometimes you accidentally call them “dad” when you’re following them around and it makes you really happy when they don’t give you a wedgie for the mistake. 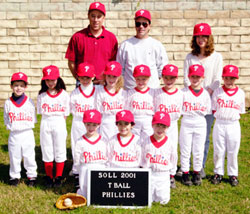 Case in point: right before the deadline the Phillies wanted to get rid of Bobby Abreu, a superstar outfielder. After weighing their options they decided against the whole “having a good ball club” thing and instead gave Abreu to the Yankees, who kind of mumbled “that’s pretty cool, man” before screaming away in their Thunderbird. The Phillies knew the Yankees really appreciated it but couldn’t say a lot because all the other cool teams were around, so they just grinned to themselves and kicked a can all the way home. I know Pitcher Cory Lidle was also a part of this deal, but since his name is generally prefaced with “nobody gives a fuck about...” I think we can safely place him near “the weather” and “grandma’s favorite recipes” on our list of things to discuss.

But, hey, trading to the Yanks isn’t so bad, right? I mean, they have a ton of underused talent, their fans hate half the roster (tell me you wouldn’t despise a guy who looks like this), and I’m pretty sure they’re the only team in baseball to hospitalize people from laughing hysterically at a single image. Surely to god the Phillies would play a little hardball if they were trying to offload one of the sport’s premiere outfielders, right? Wrong. Do you want to know what the Phillies got in return for their top player? Guess. No, they didn’t get anyone capable of coming in and helping their club right away – they picked up a bunch of minor leaguers. Minor leaguers with potential. Who come from New York.

I’m sure a lot of you readers are familiar with New York potential. “Potential” is that niggling little word that keeps Brien Taylor on the Yankees’ payroll, even though the closest he’s been to a fastball was the time he put on that song “The Way” and spent the evening wiping his ass with pictures of George Steinbrenner. “Potential” is a word that draws a cynical chuckle from any New Yorker (other chuckle words include “public sanitation” and “manners”). If you plan to build your team around “potential” the last place you want to go is New York, a state whose teams look more and more like bloody shoeboxes under Courtney Cox’s bed every year.

So, with their new minor leaguers, the Phillies are pretty much destined to be the same team they were, only minus Bobby Abreu. In a lot of ways it’s like making a deal with the devil, except instead of asking for a supermodel to bang or a millon dollars, you just tell him “burn my house to the ground and kill my family, then you can have my soul”. While I certainly can’t imagine them getting much worse, with the Lidle/Abreu connection gone they’ll have to ride all that potential – you know, the same promise that holds Chad Pennington’s rotator cuff together – all the way to a high draft pick next season. Maybe they can pick up another talented outfielder then. I hear the Yankees are looking to dump a ball-fetcher or two (not counting Derek Jeter, of course).