You're probably a fan of at least one of the things we offer this week. I know there are lots of fans of romantic slop like The Vow, tons of fans of generic action thrillers like Safe House, and billions of fans of poorly executed sci-fi drivel like Star Wars: Episode I - The Phantom Menace. If you're going to be a fan of anything, though, you should be a fan of Michael Fassbender dealing with weird sex problems, like in Shame and A Dangerous Method.

EXPECTATIONS: Man, I just can't get enough of these movies about CIA operatives forced to keep track of a genius criminal who's one step ahead of them at every turn, even though he's already in custody and has a rival criminal after him or a secret plan that only the agent can put into action through some intricate, probably completely impractical Rube Goldbergian scheme that winds up endearing the criminal to the agent in some oddly poignant manner. Sadly, it's a pretty limited genre.

REALITY: While I'm both utterly amazed and thoroughly impressed with myself for conjuring such a dead-on accurate plot prediction, it should come as no surprise that Safe House is about as generic as action thrillers come these days. Take two of Hollywood's biggest stars, put them in an action vehicle, and then send that vehicle careening through a number of car chases and shootouts, and you pretty much have the pitch for Safe House all figured out. Try as they might, the cast members only manage to elevate this from Forgettable to Curiously Forgettable.

In an act of desperation, fugitive Tobin Frost (Denzel Washington) flees from a local gang and seeks shelter from the U.S. consulate in Cape Town, South Africa. He has a secret government file that they want, and they're willing to do anything to get it from him. He's detained in a safe house manned by CIA operative Matt Weston (Ryan Reynolds), who's looking for an assignment to prove his worth as an agent. After escaping a raid on the safe house, Weston and Frost must reach another safe house on the outskirts of the city. All the while, the two are tracked by Weston's superiors (Brendan Gleeson, Vera Farmiga), who seem none too pleased with Weston's handling of the situation. 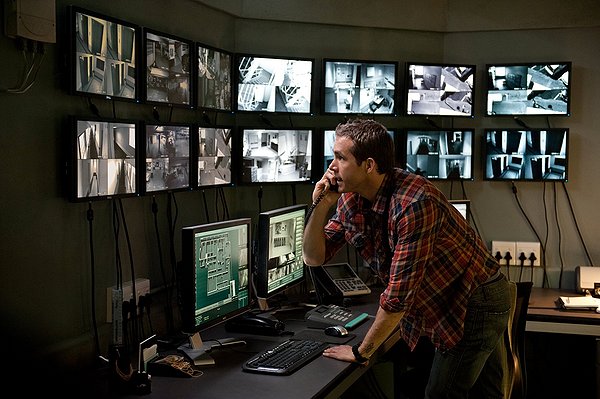 There's never anything on TV... oh, wait! Reruns of Two Guys and a Girl... no that's not aged well.

Now, one would think that with a plot this basic, the filmmakers would flesh out their film with some really unique action setpieces to set it apart from the glut of terrible action films about nothing currently clogging up your local Redbox machine. To their credit, they make a solid attempt, but director Daniel Espinosa and screenwriter David Guggenheim only succeed in making a film about Ryan Reynolds and Denzel Washington doing action things in an exotic locale. Topical themes and deep socio-political commentary don't really seem to interest this film much at all.

For example, there is a scene early on in which a CIA interrogator (Robert Patrick) waterboards Frost. For the life of me, I cannot fathom what function this scene serves in the film. They gain absolutely no intel from Frost, which would suggest that they're only doing it for show, but the only other person in the room is Matt Weston who, as a CIA operative, is probably well aware of how waterboarding works. So if it serves no narrative purpose, it must serve some thematic purpose, right? Well, not exactly.

The primary theme of Safe House is that good agents can go bad; even people with the best of intentions can still fall prey to despicable behavior. As it's depicted in the film, though, everything about the waterboarding appears routine. They bring in the water and the towels, they prep for a little bit of torture, and everyone seems to treat it as a simple part of their job description, including Frost, who greets the whole thing with a "Welp, here we go" grin on his face. Bearing all this in mind, the waterboarding scene seems to exist only to show audiences what waterboarding actually is and to garner a little extra publicity from letting Washington do the scene himself. 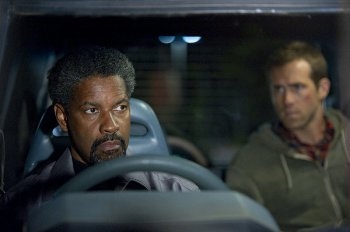 The fuck did you say about my hair?Additionally, the secret information that Tobin Frost is withholding might be the most poorly handled MacGuffin since Indiana Jones' crystal skull. He keeps the information on a microchip hidden on his person until he's asked to produce it. As it's established in the film, this information is something that everybody wants. Not just Frost and the gangs, but the CIA as well. It's explained in great detail early on what's on the chip, how dangerous the information is, and how valuable it is to all parties involved, and yet practically every turn that the film takes hinges upon the interplay between Weston and Frost, and Weston's growth as a result. Remove the chip from the equation and these two characters would not change one bit. The end of the film treats the MacGuffin like some kind of redemptive relic that will cure the government intelligence community of all its ills, as though that's what the film was supposed to be about the entire time.


Safe House's often boring script isn't helped at all by its poorly shot action. The film is predominantly photographed in close-ups, which lends the relationship between Frost and Weston a touch of familiarity. These scenes work just fine. For some reason, though, this carries over into the action as well. So much of the action is shot in close-ups with fidgety handheld camerawork that it's damn near impossible to follow on a big screen. This leads me to believe that the film wasn't designed for the big screen at all. Just like Paul Greengrass' Bourne films, Safe House is probably best viewed in the comfort of your own home, where the action scenes won't make you go crosseyed.

As it turns out, two charismatic leads aren't enough to carry a film as pedestrian as this. They certainly do their best, but all the talent in the world can't help Washington and Reynolds elevate this film above a generic slog through tired material. Aside from being poorly photographed, though, there's nothing truly bad about Safe House. Everything about it is so generic and mundane that you might find yourself forgetting which movie you're watching. "Am I watching Contraband? Why are they showing Man on Fire in theaters again? What year is this? Who am I?"

MINORITY REPORT: I haven't seen this, but I have seen the remake of Assault on Precinct 13 to which this appears to be identical. On that basis, I'd say definitely check it out, it's pretty good. - Ian "Professor Clumsy" Maddison