April is well and truly upon us, so it's time for cinemas to start preparing for the Easter rush of stupid kids watching stupid kids' movies. The season begins with the frankly embarrassing Hop, which talking-animal expert Joseph "Jay Dub" Wade was more than happy to review. For the sake of balance/sanity, we also have interesting-looking films from two beloved young directors: Source Code by Duncan Jones and Insidious by James Wan.

EXPECTATIONS: Most people use their calendars to mark special occasions; Birthdays, anniversaries, important interviews, hot dates, etc. Not me. No, my calendar is dotted and pock-marked with the release dates for talking-animal movies from here 'til Doomsday. And it's not because I can't wait to see these things, but rather because I need plenty of time to prep for Professor Clumsy's next challenge. I need a full week of four-hour mental cardio workouts and two and a half tallboys before I'm ready to tackle kiddie drivel like Hop. At this point, I expect a talking-animal movie to make me want to scoop my eyes out with my ticket stub. The bar is pretty low, so if Hop can make it over that, I'll chalk it up as a win.

REALITY: There comes a time in every economic recession when the children must suffer right alongside the rest of us. In a pretty clear case of art imitating life, the producers of Hop decided that now was a good time to beat kids over the head with a couple of the harsh facts of life. "Father knows best." "Everyone has to grow up sometime." "In extreme duress, making someone you just met the president of your company is a good idea." You know, the facts of life that really affect young people. Wait, what the fuck am I talking about? Hop is a movie that wants to teach kids these facts, but decides somewhere along the way that the pursuit of candy is much more important. 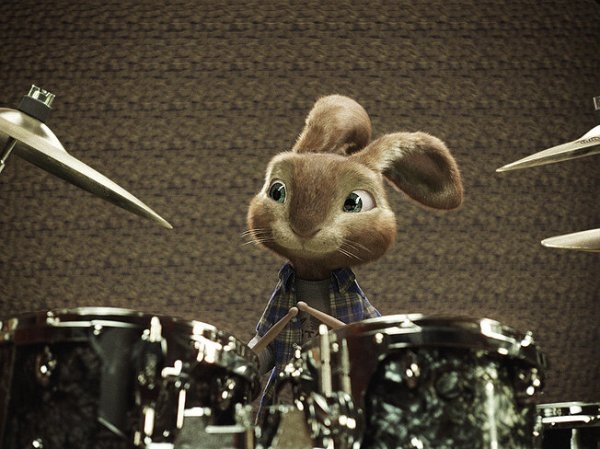 I can accept a rabbit playing the drums, but that shirt just isn't working for you.

Because I sincerely doubt anyone reading this will actually see the movie, I'm going to explain every square inch of the plot right now.

The movie opens with a narration from some guy named Fred O'Hare (James Marsden), who tells us this is the story of how he became the Easter Bunny. (The main character in this movie is named "O'Hare", and he isn't the rabbit? This is going to be magical.) Anyway, we meet the Easter Bunny (voice of Hugh Laurie) and his son E.B. (voice of Russell Brand), who is about to be promoted to the position of Official Easter Bunny. E.B., however, doesn't want that; he wants to be a drummer, so he decides to flee Easter Island (yup) and start a new life in Hollywood.

Next, we meet Fred, a 20-something grade-A fuckup who still lives at home. Fred's family wants him to get a job and move out of the house, but he's just too damn happy doing nothing. Fred's sister (TV's Kaley Cuoco) tries to help nudge him out of the nest by asking him to house-sit for her boss, which is where he meets E.B., because I guess the script decided Russell Brand was missing for far too long. While Fred tries to find a real job, he helps E.B. look for work as a drummer, but their job hunt is interrupted by female rabbit marines who are trying to track down E.B. because he's supposed to be crowned the Easter Bunny in a few days, and it's important that he go home because a baby chick named Carlos (voice of Hank Azaria) is about to stage a coup d'état and proclaim himself the new Easter Bunny, and sweet Jesus I apologize for letting this sentence run for so long.

All parties wind up on Easter Island, where E.B. defeats Carlos with the power of drumming and Fred saves E.B.'s father from certain doom because he's a tall, muscular human for whom shutting off a rabbit-sized deathtrap is as easy as tripping over the controls. Everyone lives happily ever after and Fred becomes the Willy Wonka of Rabbit Town, where he will eventually contract diabetes from living on an island that is apparently made of jelly beans.

This is where I close the storybook and find half of you asleep out of boredom. 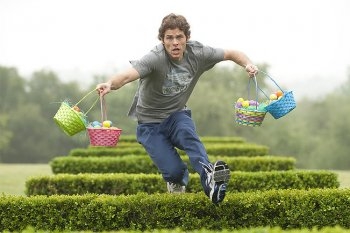 James' competitive spirit once again ruins the Easter egg hunt for the local children.It took me three paragraphs to explain what the hell happens in this movie, but lurking in all that nonsense there is some semblance of a story. What they're shooting for is some kind of Willy Wonka/Santa Clause hybrid, but dumbed down and geared even further toward youngsters who aren't quite ready to grasp concepts like Plot or Characters. The story feels like it was spat up eight months ago after Illumination Entertainment found out Despicable Me made $650 billion.

"We need to capitalize on this fame and fortune immediately," said an assistant producer. "Somebody cut me a check for 60 million bucks. I've got an idea for a movie about candy!"

My beef with Hop isn't that it's grossly offensive or filled with fart jokes. I honestly don't even have much of a problem with the movie at all. It's as safe and inoffensive as any kids' movie you're ever likely to find. What I will say, however, is that Hop deals in cuteness the way Marmaduke dealt in farts: constantly. One thing I can say in favor of the film is that the animators did a pretty good job bringing these talking rabbits to life. I wish I could say the same for the chicks, but let's face it, you could realistically just add some googly eyes to a puff of yellow and call it a day.

And you know what else? The cast really, really tries to make the most of this thing. I've never really warmed up to Russell Brand as a comedian or as a Jack Sparrow reject, but he seems to make a pretty good voice actor. If anything, Brand riffing off the script offers the only real laughs in the film. He even shows up in person at one point while E.B. is having a "deep" moment with himself in the mirror. I wish I could say he showed considerable range by playing three different characters in the space of five seconds, but it's really more like an infinite mirror trick.

Speaking of sad illusions, what the hell happened to James Marsden? Ten years ago, he seemed like he was about to break into the A-list, but after bitching out of X-Men 3 to play a nothing character in the last Superman movie, Marsden's kinda dropped off the radar. There's really no reason for him to be flailing around in crap like this when he could be in big-boy movies turning in a decent performance. On the other hand, maybe he's just a really sly method actor and the only way to get into his character was to take a thankless role that'll only disappoint his parents. Pretty sneaky, Mr. Marsden. Pretty sneaky indeed.

Hop is not a movie in the traditional sense. Your kids will not learn anything about the world that they couldn't learn from TV or, God forbid, their parents. They will not be entertained by the thrilling story of a man whose personal struggles lead to him becoming the Easter Bunny. They will marvel at the colorful images of candy and dance around to (what else?) "I Want Candy". It's Enter the Void for kids. If you feel you're up to managing the sugar rush that your young'uns will get after staring at this thing for 90 minutes, then I say go nuts. You're probably better off taking them to the mall to stare at some real candy, though.

MINORITY REPORT: Just two more weeks and you get to watch Rio. I know you're excited about that one. - Ian "ProfessorClumsy" Maddison